Taliban storm military base in Pakistan 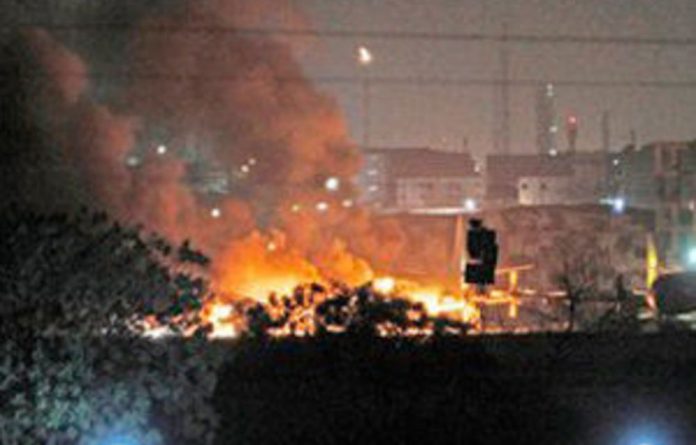 An overnight battle with militants at Pakistan’s naval aviation base erupted again after dawn on Monday, with blasts ringing out and choppers hovering overhead as security forces launched a counter-offensive.

The Pakistani Taliban claimed responsibility for the brazen attack on the base by 15 to 20 gunmen, saying it was to avenge the killing of al-Qaeda leader Osama bin Laden on May 2.

“It was the revenge of martyrdom of Osama bin Laden. It was the proof that we are still united and powerful,” Ehsanullah Ehsan told Reuters by telephone from an undisclosed location.

More than 30 troops entered the PNS Mehran base in the southern city of Karachi as the battle resumed in the morning and eight blasts were heard in the space of 30 minutes.

“The operation still continues. It is not over yet,” said one security official, eight hours after the militants stormed the installation with guns and grenades, killing at least five people and blowing up a military aircraft.

Eleven people were wounded in the attack on one of the country’s most heavily guarded military installations, where jet fuel tanks appeared to have caught fire and exploded.

Those killed in the assault, which started at around 10.30pm on Sunday, included a sailor, three firefighters and an Army ranger.

“They were carrying guns, rocket-propelled grenades [RPGs] and hand grenades. They hit the aircraft with an RPG,” navy spokesperson Commander Salman Ali said.

The Karachi attack evoked memories of an assault on Pakistan’s army headquarters in the town of Rawalpindi in 2009, and revived concerns that even the most well-guarded installations in the country remain vulnerable to militants.

A spokesperson said one P-3C Orion, a maritime patrol aircraft, had been destroyed and that intermittent gunfire was continuing.

Interior Minister Rehman Malik said earlier that the militants had attacked from the rear of the base.

“We have been able to confine them to one building and an operation is under way either to kill or capture them,” he said.

Media reports said the attackers had made their way in through a sewer line, but that was not confirmed. The military’s goal was to capture as many of the attackers alive as possible, Pakistan television reported.

Pakistani military and paramilitary reinforcements poured in after the attack began, with four vehicles carrying about 10 troops each moving into the base.

“Such a cowardly act of terror could not deter the commitment of the government and people of Pakistan to fight terrorism,” Gilani said in statement.

Wave of bombings
Pakistan has faced a wave of bombings and gun assaults over the last few years, some of them claimed by the Tehrik-e-Taliban Pakistan (TTP), or Pakistani Taliban.

Others have been blamed on al-Qaeda-linked militant groups once nurtured by the Pakistani military which have since slipped out of control.

The TTP, which has links with al-Qaeda, is led by Hakimullah Mehsud, a brutal militant commander whose fighters regularly clash with the Pakistan army in the north-west of the country.

It also claimed responsibility for being behind the botched plot to bomb New York’s Times Square last year.

The discovery that Bin Laden was living in the garrison town of Abbottabad, not far from the Pakistan Military Academy, has revived suspicions that militants may be receiving help from some people within the security establishment.

Pakistan and the United States say the senior leadership in the country did not know Bin Laden was in Abbottabad.

Washington sees nuclear-armed Pakistan as a key, if troubled, ally in the region essential to its attempts to root out militant forces in neighbouring Afghanistan.

“We condemn the attack and our sympathies are with the families of those injured or killed,” the White House said in a statement.

On April 28, suspected militants detonated a roadside bomb in Karachi, killing four members of the navy, the third attack on the navy in a week.