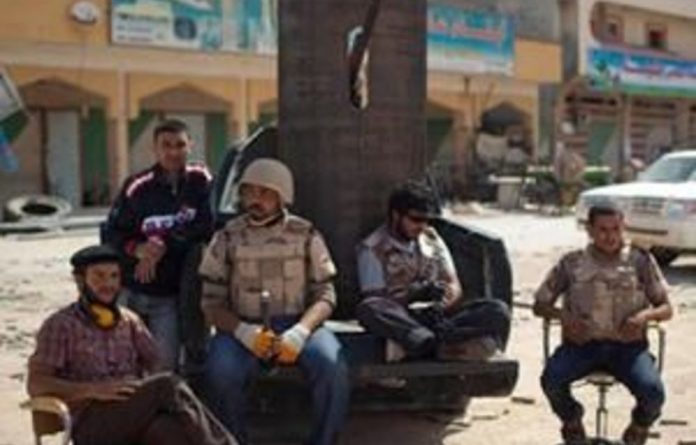 Powerful explosions rocked Tripoli on Tuesday as Nato unleashed its heaviest blitz yet of the capital, while France and Britain piled pressure on Muammar Gaddafi by bringing helicopters into the Libya fray.

Libyan government spokesperson Mussa Ibrahim told reporters that at least three people died and 150 were wounded in the air strikes, which he said targeted a deserted military barracks but which instead hit civilians living nearby.

The raids lasted more than half an hour, beginning at around 1am when powerful blasts were heard in the sector around Gaddafis Bab al-Aziziya residence.

Strategic targets hit
More than 15 strong blasts were heard in the neighbourhood, with the sound of warplanes roaring overhead.

Nato rejected the claim that the strikes had targeted a barracks and said that, in fact, a vehicle storage facility had been struck.

“This facility is known to have been active during the initial regime suppression of the population in February 2011 and has remained so ever since; resupplying the regime forces that have been conducting attacks against innocent civilians.”

Sky strikers
In another boost to forces fighting to oust the Libyan strongman, France said it would provide attack helicopters for Nato’s air campaign along with Britain, and the EU widened sanctions against Gaddafi’s forces.

The helicopters, a weapon that has yet to be used by Nato in Libya, will help the Western alliance strike regime military assets hidden in urban areas while avoiding civilian casualties, French ministers said.

French Foreign Minister Alain Juppe, on the sidelines of meetings of European Union foreign and defence ministers in Brussels, said Paris was deploying Tigre and Gazelle class helicopter gunships aboard an aircraft carrier.

Exit advised
On Monday, Washington urged Gaddafi to leave Libya as Feltman, the US Assistant Secretary of State for Near Eastern Affairs, held talks in the rebel capital Benghazi.

Feltman told a media conference in Benghazi on Tuesday that the rebels’ National Transitional Council (NTC) had been invited to open an office in Washington.

“I delivered a formal invitation to the council for the opening of a representation in Washington,” Feltman said.

“This step is an important milestone … and we are happy they accepted it,” he added.

On the issue of calls for US recognition of the NTC as the “sole legitimate interlocutor” of Libyans, Feltman noted the council was in fact already the only representative of the country in Washington.

“We have a special envoy in Benghazi. President (Barack) Obama has just invited the NTC to establish a representative office in Washington,” he said.

“We have no office in Tripoli now. And we asked the Gaddafi people to close their embassy in Washington.

“Our officials see members of the council, the council sees us,” said Feltman.

“There is an ongoing diplomatic, political relationship and dialogue with members of the council who are considered by our fellows credible and legitimate representatives of the Libyan people.”

Britain, France, Gambia, Italy and Qatar have already recognised the rebel council as their sole interlocutor in Libya.

On the ground, there was little movement in the battle lines.

Rebel military spokesperson Ahmed Omar Bani said the frontline between the rebel-held east and the mainly government-held west remained between the strategic crossroads town of Ajdabiya and the oil refinery town of Brega.

Bani said rebel fighters who earlier this month broke the loyalist siege of Libya’s third-largest city Misrata — the rebels’ most significant bastion in the west — had pushed on towards Zliten, the next town along the coastal road towards Tripoli. — AFP