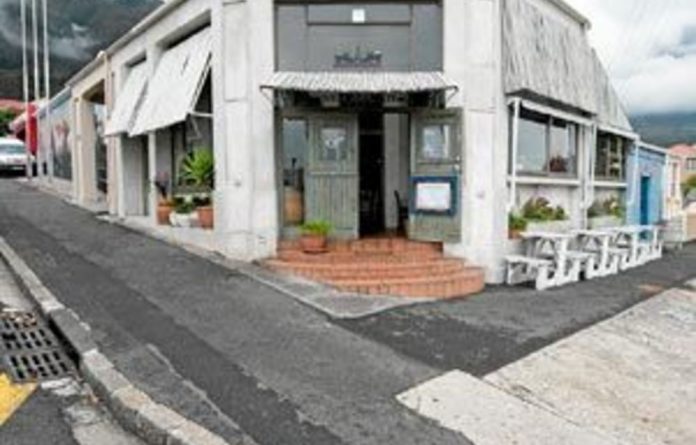 Vredehoek, on the eastern, sea-facing slopes of Table Mountain, once the site of farms and a short-lived tin-mine operation, was urbanised during the interwar period. Initially, Vredehoek was an immigrant neighbourhood. Many of the immigrants were Jewish and had moved up from District Six. At one stage activist Cissie Gool lived here.

Small blocks of flats went up in the late 1930s and early 1940s, with Art Deco the preferred style. You can find a dozen neat, symmetrical Art Deco blocks squatting along Davenport Road and another constellation on Bellair, which leads into Derry Street.

Vredehoek is popular with people in their 30s and 40s — professional young couples who can afford it. But it is also home to many practising in the grey areas of the creative pursuits — designers, filmmakers, singers and the yuppie-hippy set.

In the past decade restaurants have sprung up along two strips: on Derry there is Carlyle’s (opened in 2002, one of the most established), Bella Italia, Raw Café and the Sidewalk Café Bistro. On Deer Park Drive there is the Deer Park Café, D’Angelo’s ­Pizzeria & Sports Bar and the ­Woodlands Eatery.

Cheap and cheerful
These are mostly mom-and-pop type establishments. D’Angelo’s brags that it offers four sports channels simultaneously on big-screen TV. Cheap and cheerful Carlyle’s can be noisy with drinkers, but is popular for revels. Bella Italia is best visited during the day, but handy for take-aways in the evenings. The Deer Park Café has the great advantage that it opens on to the public park (a delight in itself) with playground facilities. Casual, unpretentious Raw Café is open for breakfast and lunch only.

Among the upper Vredehoek neighbourhood restaurants, two establishments deserve the attention of the non-resident diner. The first is the Sidewalk Café, where you can watch people doing U-turns in the road. Open all day, it’s good for breakfast, coffees, lunch and on hot, windless Cape Town afternoons, you can rise above the city and catch the late sunrays, have a glass of wine and enjoy an early supper — if you can get a table, there are as many beer-drinkers as wine-sippers here.

Since Madame Zingara’s Richard Griffin added it to his stable, the place has been seriously turned around. He has brought his hallmark eclectic bric-a-brac style. Throughout your meal and on every visit you seem to notice some new cheerful tsatske.

The menu covers the bases and there are daily specials. Prices are reasonable.

Recommendations include: the crayfish special (R60) with mango and avocado served on a warm plate or the prawn starter (R60) in pastry hair with juicy fat prawns gently deep fried. For mains: the “vis in ‘n blik” (R70) is battered hake and thick potato finger chips served in an enamel bucket with homemade tartare sauce. You are unlikely to go wrong with the risotto (R75) of chicken, mushroom, spinach and peas with white wine.

The only dessert I tried, an apple and mixed-berry crumble pressed into a ramekin, was rather disappointing.

Since opening a few months ago (replacing Yum restaurant), the Woodlands Eatery has been a big hit with locals and word is spreading beyond Vredehoek. The new owners, a Plettenberg Bay family, have decorated it in a relaxed Bohemian arts-and-crafts style, with quirky pictures on the walls, wooden driftwood frames, mix-and-matched chairs, some sprayed gold, others green, and monochrome floral napkins. Sometimes you will hear Chef Larry Steenkamp bursting into song in the kitchen. The staff, several of whom have followed Steenkamp from his previous position at the Emily Moon lodge, are friendly and attentive, never intrusive.

On three occasions here, it was noticeable that most tables were occupied by women. Any explanation will automatically sound sexist.

Start with the establishment’s take on a mojito, a delicious rum cocktail with nectarine slices and granadilla pulp, fresh lime, mint leaves and crushed ice.

To date no dish I have tried here has disappointed. They all have a freshness about them that is both satisfying and able to excite the fussiest (dinner partner Munchkin) or the more jaded palate (my own).

Here follows what we have identified as the most reliable suggestions. For starters: salt-and-pepper squid (R45); prawn springrolls (R35) that are juicy and not oily, containing basil, coriander and cashew nuts marinated in homemade Thai sauce.

Watching the other tables, tall cheese burgers held together with wooden skewers are most popular, with thin-crust pizzas.

These pizzas are almost flammkuchen and have a pleasing smoky flavor. The recommended toppings are the lamb strips (R70) that have been stewed in a Tuscan-style tomato base with carrots, mozzarella, fresh rosemary sticks and dollops of crème fraiche. The mushroom and artichoke pizza (R58) has real artichoke, not canned or bottled.

Steenkamp also does an agreeable pasta with artichoke, green beans and basil pesto and is generous with the pine nuts.

Who knows, with such options, you might want to move to Vredehoek.