Time’s up, says Nato — as Zuma meets Gaddafi in Libya 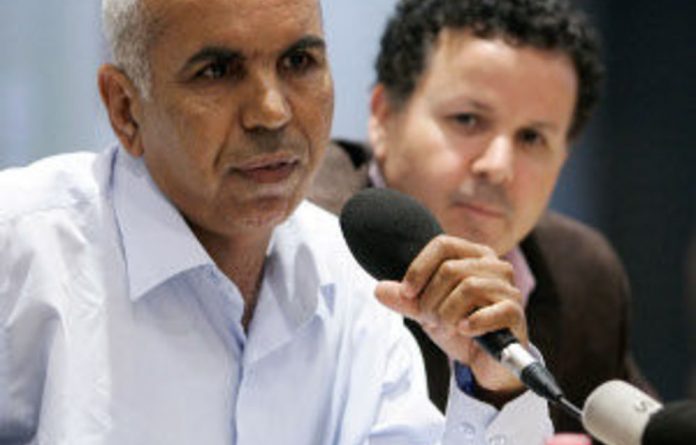 Italian foreign ministry officials presented five generals, two colonels and a major at a news conference in Rome on Monday.

General Melud Massoud Halasa said Gaddafi’s forces were only 20% as efficient as they were before the rebellion, and at most 10 generals were still loyal to him.

Back in Libya, Zuma met Gaddafi in the Bab al-Aziziya compound, where the Libyan leader has been staying since fighting between his forces and rebels broke out in February, state media reported.

Zuma also visited the site of the house where Gaddafi’s son, Saif al-Arab, and three grandsons were killed by a Nato airstrike earlier this month, state news agency Jana reported.

This was Zuma’s second trip to Libya since fighting broke out between Gaddafi loyalists and rebels. It follows a call by the ANC for a negotiated solution to the violence.

“We also join the continent and all peace-loving people of the world in condemning the continuing aerial bombardments of Libya by Western forces,” the ANC said on Sunday evening.

While Western leaders and the rebels are calling for Gaddafi to step down, Zuma is officially travelling to help push through “political reforms” to allow for an end to the crisis.

Zuma reportedly arrived at Gaddafi’s Bab al-Aziziya compound, a regular target of Nato air strikes, at 2pm GMT, after being greeted at the airport by Gaddafi’s prime minister, Baghdadi al-Mahmudi, shortly after state media said Nato-led air strikes on the town of Zliten, west of the rebel-held city of Misrata, had killed 11 people.

Immediate ceasefire
The South African presidency said Zuma was seeking an immediate ceasefire, to boost humanitarian aid and bring about the reforms needed to eliminate the cause of the conflict which erupted amid anti-regime protests in mid-February.

But it rejected as “misleading” reports the talks would focus on an exit strategy for Gaddafi, calling the visit part of African Union efforts to end the conflict.

Libyan state television said Zuma would discuss implementing the AU “roadmap” for peace, as it reported Nato-led raids on the Nafusa mountains in the far west and the town of Bani Walid, near Misrata.

“There were 11 people martyred and a number of wounded,” it said.

Departing, defecting or deserting
At a meeting of Nato’s parliamentary assembly in Bulgaria, Nato Secretary General Anders Fogh Rasmussen insisted: “Gaddafi’s reign of terror is coming to an end.

“He is increasingly isolated at home and abroad. Even those closest to him are departing, defecting or deserting … It is time for Gaddafi to go as well,” Rasmussen said.

The Nato chief was upbeat about the results of Nato’s military intervention to enforce a UN-backed no-fly zone over the north African country.

“Our operation in Libya, Operation Unified Protector, is achieving its objectives and we are preventing Gaddafi from achieving his,” Rasmussen said.

“In just two months we have made significant progress. We have seriously degraded Gaddafi’s ability to kill his own people.”

But in a statement ahead of Zuma’s visit, the African National Congress (ANC) slammed the Nato raids.

“We also join the continent and all peace loving people of the world in condemning the continuing aerial bombardments of Libya by Western forces,” it said after a two-day meeting of its executive council.

The Libyan regime also got support from two French lawyers who planned to initiate legal proceedings against French President Nicolas Sarkozy for crimes against humanity over the Libya campaign.

Libyan justice ministry official Ibrahim Boukhzam told reporters in Tripoli on Monday that Jacques Verges and Roland Dumas had offered to represent families he said were victims of the Nato bombs.

The regime’s response to the rebellion, however, was condemned in Geneva by UN rights chief Navi Pillay.

Magnitude of measures
“The brutality and magnitude of measures taken by the governments in Libya and now Syria have been particularly shocking in their outright disregard for basic human rights,” Pillay told the UN Human Rights Council.

Mustafa Abdul Jalil, who heads the rebels’ provisional government, welcomed a Friday call by G8 world powers for Gaddafi to stand down, saying it was the position reflective of the “will of the international community as well as the demands and aspirations of the Libyan people.”

The Libyan regime responded by saying that only an African Union initiative to resolve the crisis matters to them.

The rebels reiterated they would accept no settlement that did not entail Gaddafi’s departure.

“We witness how Colonel Gaddafi presents initiatives to fool the world and create the illusion that he is in search of peace,” Abdul Jalil said.

“It is with this in mind that we would like to reconfirm that the basis of any consideration for the resolution of the Libyan crisis is the removal of the main reason for this crisis, Colonel Gaddafi.” — AFP, Sapa-dpa