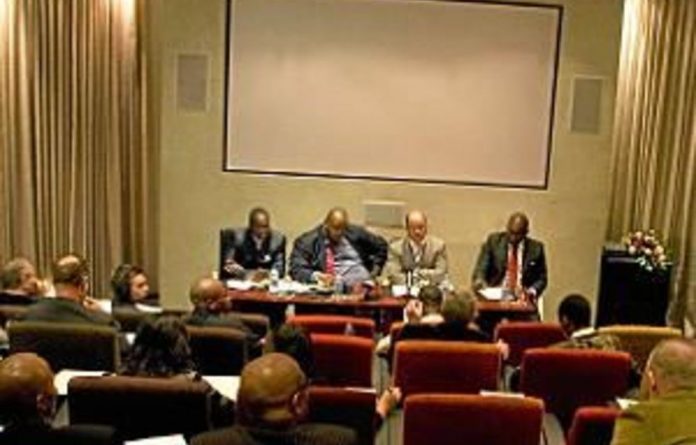 ‘We’ve lost money, we’ve lost our credibility, we’ve lost everything,” lamented Aurora Empowerment Systems’ financial director, Thulani Ngubane, this week, days after the joint liquidators stripped the company of its control of the liquidated Pamodzi Gold mines in Orkney and Grootvlei on the East Rand.

The removal of Aurora followed hot on the heels of the dismissal of lead liquidator Enver Motala and the head of KPMG’s liquidation division, Gavin Gainsford, by the department of justice and constitutional development.

Motala insists that his dismissal was “unfair” and “unlawful”, as he was not given a chance to provide the department with evidence in the inquiry into his and Gainsford’s role.

In an interview this week Ngubane said the future of the mines was “grim” now that the liquidators had taken charge. “The Chinese have left, so they have no one to buy the mines,” he said.

It is believed that Chinese company Shangdong Gold, which showed a genuine interest in the mine, is no longer bidding for it.

Ngubane linked Aurora’s removal to that of Motala a week ago. “Everyone could see that because Motala has been axed it paved the way for the removal of Aurora. That’s what the unions even said.” This week Cosatu called for an investigation into Aurora and the sacked liquidators. “I won’t waste my time with the unions,” said Ngubane. “There’s no substance in whatever they say.

“If your mind is working properly, you will see there is nothing to investigate. The mine is vulnerable, everyone knows that. The liquidators have people stealing gold under their noses. You can’t just blame Aurora. Everybody is in a situation where nobody knows what to do.” He blamed the media for many of the problems Aurora faced. “The media put so much pressure on this whole thing,” he said. “Everyone had to zoom in to see what Khulubuse [Zuma] and Zondwa Mandela were doing.”

Zuma, President Jacob Zuma’s nephew, and Mandela, grandson of former president Nelson Mandela, are Aurora directors. Mandela declined to be interviewed this week. “We had so many problems,” Ngubane said. “There was no funding available. I don’t regret one day, but even a dummy could see that the only thing missing was funding. We were failed by the assets themselves and by the workers, who didn’t have the patience to have the proper vision.”

Awaiting developments
More than 3 000 workers on the mines have not been paid for more than a year. According to National Union of Mineworkers (NUM) shaft chairperson, Ayanda Mlingane, who visited Grootvlei on Wednesday, hundreds of workers remain in its hostels, awaiting developments.

The unionist confirmed that the unions had been in negotiations with the liquidators, but would not comment further. Nothing at Grootvlei or Orkney had changed since Aurora’s removal, he said.

A spokesperson for trade union Solidarity, Gideon du Plessis, said the remaining liquidators were conducting an audit of the mining operations.

The liquidation team released a statement on Thursday saying it was “currently — performing an inspection and review of the mines to determine whether Aurora has restored full and complete possession of the mines, with all assets that were previously contained therein and to assess the extent of damages which the estate may have suffered during the period of Aurora’s interim possession of the mines—

“The joint provisional liquidators are, at present, in negotiation with various parties, with the view of concluding an agreement for the sale of the assets in such a manner as to optimise the benefit for all creditors.”

Du Plessis said the liquidators had “found so many contractors at the mines that are doing little things. There are people removing gold and there’s no paper trail. We don’t know how much gold is going to who.” The liquidators are expected to release a statement on their findings on Friday.

Meanwhile, a war of words has broken out between Motala and Du Plessis, with the former accusing the unionist of trying to seize control of the Grootvlei mine for his union’s financial benefit.

In a 14-page statement released this week Motala said it was “no surprise” that Du Plessis had embarked on “an aggressive disinformation media campaign since our unlawful and irregular dismissal, to discredit me and the entire liquidation process to date”.

“He has done so — following his unsuccessful attempts to secure management of the Pamodzi East Rand mine for the members of Solidarity, so that they can mine for their own profit or loss. Naturally, the secured creditors and joint provisional liquidators did not approve this. He has since become antagonistic towards me. The recent media coverage reporting on the latest developments in the Pamodzi liquidation has also been driven by Du Plessis, often on behalf of the remaining team of liquidators.”

Du Plessis hit back on Thursday, saying that his criticism of Motala was “in line with comments made by the NUM, Cosatu, the Congress of the People and Mineral Resources Minister Susan Shabangu during a parliamentary debate in 2010, journalists, political commentators and the general public, especially comments made in the social media”.

“It became apparent in the social media that a large number of the public’s negative responses to Mr Motala was based on information people obtained by doing a search on Mr Motala’s track record as a liquidator,” he said. The ongoing public controversy over the mines could scare off other potential investors.

Business Day reported this week that JSE-listed mining company Goliath Gold had shown an interest in the mines. However, Goliath head, Neal Froneman, would neither confirm nor deny this, saying only that “it is the strategy of Goliath to pursue consolidation”. Goliath Gold made a cautionary announcement this week, but little else is known about its potential links to Aurora.