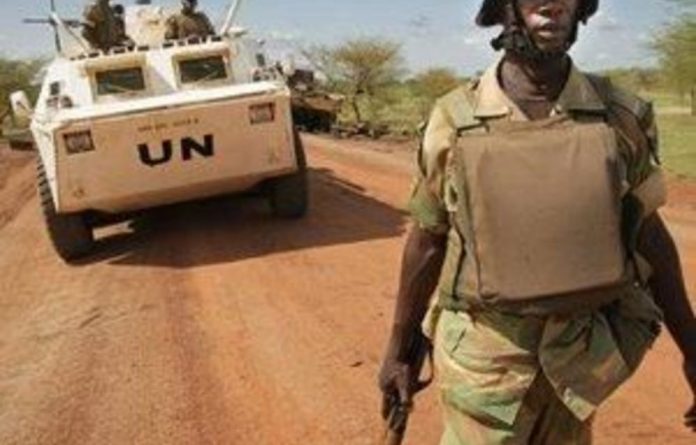 A confidential United Nations report warns that the invasion by Sudan’s military of the contested north-south region of Abyei could lead to “ethnic cleansing” if the tens of thousands of residents who fled are not able to return.

The UN human rights report — dated May 29 and marked “Not For Public Citation or Distribution” — said the north’s Khartoum government may have carried out a premeditated military plan to invade Abyei when Sudanese Armed Forces, or SAF, troops moved in May 21.

“The SAF attack and occupation of Abyei and the resultant displacement of over 30 000 Ngok Dinkas from Abyei could lead to ethnic cleansing, if conditions for the return of the displaced Ngok Dinka residents are not created,” according to the report, which was obtained by the Associated Press on Friday.

Expressing its “grave concern” about the escalating violence, the UN Security Council later on Friday condemned Khartoum for seizing control of Abyei, “and the resulting displacement of tens of thousands of residents”.

It also called on the Sudanese Armed Forces to “ensure an immediate halt to all looting, burning, and illegal resettlement” in Abyei and asked both the north and the south to withdraw their military forces from the area.

The Ngok Dinka is a black tribe that associates itself with Sudan’s south. The Ngok Dinka fled Abyei when northern troops and ethnic Misseriya — Arab cattle herders aligned with the north — moved in and looted homes. The UN report estimated that between 15%t and 20% of the homes in Abyei were burned in what it called “deliberate destruction” and a violation of international humanitarian law.

“By destroying their homes, looting their properties and inspiring fear and terror, over 30 000 Ngok Dinkas have been forcefully displaced from their ancestral homes, leaving the Abyei area now more or less homogeneously occupied by the Misseriya,” it said.

The report said that the likelihood that all the Ngok Dinka residents can return to Abyei “is limited”, given the massive destruction of civilian property and the occupation of Abyei by northern forces.

President Barack Obama’s Homeland Security and Counterterrorism adviser, John Brennan, held meetings in Sudan’s capital of Khartoum this week to discuss deteriorating security conditions around Abyei. Princeton Lyman, the US Special Envoy to Sudan, was in the southern capital of Juba on Friday and told AP it was not realistic to have the Ngok Dinka move back into Abyei while it is occupied.

“People who fled out of fear will not be comfortable coming back,” Lyman said. “The key is for the SAF to withdraw with appropriate security arrangements from the UN. Then we know people will be able to safely go back.”

North and south Sudan fought a more than two-decade civil war that ended with a 2005 peace agreement that also gave the south the right to vote for independence. That vote passed overwhelmingly, and Southern Sudan is poised to become the world’s newest nation in July.

But tensions over Abyei — a fertile land near major oil fields — has raised fears of conflict only weeks before the south secedes.

War crimes
The north’s invasion of Abyei was precipitated by a May 19 attack on northern and UN troops by southern soldiers. The UN report said two northern soldiers were killed in that attack, which it called a trigger for the invasion but one that appeared to be a “deliberate plan” by the north “as evidenced by the SAF troop build up in the area before the attack”, the report said.

The report also called the southern shelling of UN peacekeepers a violation of international humanitarian law.

In its Friday statement, the Security Council condemned the May 19 and 24 attacks on the UN mission and its personnel, calling them “criminal acts” that “threaten to undermine the commitment of the parties to avoid a return to war”.

The council also warned “that those responsible for violations of international law, including humanitarian and human rights law, as well as those who ordered those acts, will be held accountable”.

The UN is not the first organisation to warn that war crimes may have been committed by the Khartoum government’s army in the recent Abyei violence.

A US-based project supported by Hollywood star George Clooney published satellite images of the destruction in Abyei after the invasion and called on the UN Security Council to refer the invasion to the International Criminal Court.

The Satellite Sentinel Project said a group of former US civilian and military officials had affirmed the group’s visual evidence that the Sudanese government had “allegedly committed war crimes during its occupation of the disputed region of Abyei”.

David Scheffer, former US State Department Special Ambassador-at-Large for War Crimes, was quoted by the group as saying that the evidence derived from the satellite imagery of the destruction in Abyei “reveals actions that appear to violate the principles of military necessity, proportionality, and distinction — primary pillars of the laws of war”.

As tanks rolled into the town and Antonov planes provided air cover for the northern troops and their associated militia forces, tens of thousands of Abyei residents fled south, many on foot, while carrying small children and whatever possessions they could manage.

The UN Security Council, on a visit to Sudan when the invasion occurred, called for the immediate and unconditional withdrawal of the Sudanese Armed Forces. But nearly two weeks later northern troops have not left Abyei, and many diplomats, analysts, and even Southern Sudanese officials quietly say that no one has much leverage to force the north to withdraw.

In its Friday statement, the council said that because of the continued insecurity it believes both sides would “benefit from a continuing UN-mandated presence in Abyei after July 9”.

Sudan informed the United Nations in New York earlier this month that it wants the UN peacekeeping force to leave its territory when South Sudan becomes independent. – Sapa-AP

Battle for Abyei could ignite new war in Sudan