The fresh Prince of Newtown 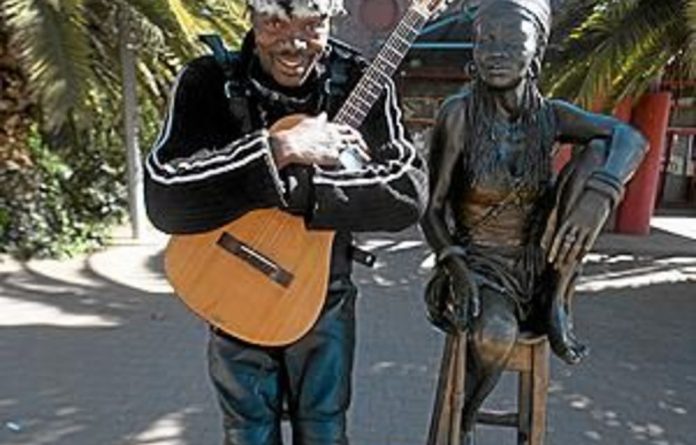 Go to Newtown in Johannesburg a few times and you will probably bump into Prince Twala, a tall, scrawny, eccentric figure wearing dreadlocks with a touch of peroxide who seems to know everyone.

When we sat down for an interview, appropriately at Sophiatown, a popular restaurant near Mary Fitzgerald Square, our talk was constantly interrupted by a stream of people, who stopped to say hi, to ask for directions or just to acknowledge the district’s most famous denizen.

“Prince Zo Zo” one fan called out. “Prince of Newtown,” another shouted.

Jeweller, artist and musician, Prince was born in 1971 to a musician father, Simon Jika Twala, of the Flaming Souls, a jazz outfit. He has taken a different path to his father — for years he has fashioned rings from cutlery. After years on the street, he has moved to the Unity Gallery on President Street and his jewellery (some of it silver-plated and worth more than a thousand rands) is on sale.

When Prince and his younger brother first showed interest in music, their mother wasn’t impressed. “Do you want them to have many wives?” their mother put the question to his father. But their mother, resigned to the idea of Prince going into music, told him to go to an institution where he could be taught formally. “I decided to go to music school, the Alexandra Arts Centre,” he said.

He owns 13 guitars and is part of Studio Waste Production, a music collective. On the day of the interview, he had just been to the studio.

He has lived in Newtown for 20-odd years and has been a witness to the area’s development. Bordered by Johannesburg’s CBD and Fordsburg, Newtown was originally known as Coolie Location. Using the bubonic plague that swept through the location at the turn of the 20th century as an excuse, the council razed the settlement and moved the Indian, African and coloured residents who lived there to racially segregated areas.

After decades of being left to its own spatial dynamics, Newtown was designated as a cultural precinct several years ago.

Vibrant past
Sci-Bono, a science centre for school learners, was erected; the Workers’ Library was refurbished; restaurants Sophiatown and Capello’s occupied the district’s prime real estate on Central Place, also home to radio station Kaya FM; a fragile Kippies, a Jozi landmark, was stabilised but remains unoccupied; Mary Fitzgerald Square is being revamped; and a mall is going to be built next to the Market Theatre complex.

In some ways Prince is the slightly buried shard that sticks out from a vibrant past — his sharp, quirky dress, melodious tsotsitaal and informal demeanour are a throwback to another era. He could be the only remaining human historical constant whose eyes have seen Newtown undergo “gentrification”.

He tells me of a horse stable next to the Bassline and of a “warehouse for artists” where Sophiatown is. He knows who nicked the bronze microphone that was part of the statue of Brenda Fassie. He worked at the Bassline when it was known as Megamusic Warehouse and personally knows the artist who made the rather ungainly statue in front of the Workers’ Library.

He looks back fondly to when the Horror Café, next to the SAB World of Beer, was a vibrant venue, hosting reggae and poetry shows. It was unoccupied for a long time but is now an occasional venue run as Shikisha by the brothers Mzwandile and Ziggy Thabethe, the owners of Sophiatown.

If you find that you feel like saying hi to Prince and giving him a hug, you are in good company.

In 1997 the Cuban-American artist Coco Fusco, for the duration of her stay for the Johannesburg Biennale, sought out Prince for company and never went anywhere without the streetwise artist.

“Yeah,” he sparkled as he recalled the biennale, a major milestone in Johannesburg’s cultural development. “I was involved in organising the troupe of artists for the carnival,” he said.

He counts many artists as his friends and acquaintances, people such as the late Fassie, director and actor James Ngcobo (Prince made some of the costumes and jewellery for Ngcobo’s production Thirst) and kwaito star Pitch Black Afro. But it was when we talked about Newtown that he suddenly became animated, enraged even. “Any town has its heritage and when they kill Newtown they are killing the city of Johannesburg. We liked it the way it was,” he said.

“‘We need to change the environment’, the JDA [Johannesburg Development Agency] says. But why are they taking away the good things, vendors and artists who used to work here?
“But the JDA says we are squatters. We are not squatters,” he said. “Why can’t we keep our monuments? But the people at JDA won’t listen to us.”

When our talk turned to monuments, he said in his fast-paced musical drawl that the JDA should install mementoes to “remind us what it used to be like back then”.

That was a cue to speak about the old Kippies club, where the hunched bronze figure of the legend Kippie Moeketsi sits in spectral silence. The club was refurbished a few years ago but remains firmly shut. “It’s like a haunted building,” he said.

Human traffic in Newtown follows its own internal logic and refuses to be supervised by the city’s planners. Jeppe Street, for instance, is busy with people visiting Xarra Bookshop, Sophiatown, the Bassline and Kaldi’s Coffee Shop.

Across the street squats the sprawling Museum Africa, which receives a steady trickle of visitors, mostly tourists. Also on the square sits Niki’s Oasis, a restaurant that might seem closed but is in fact open. But the French Institute of South Africa (Ifas) and Afronova, the gallery owned by Henri Vergon, have moved to Braamfontein.

There are several other buildings and spaces, the function of which one can’t work out and which seem to have been determined by people poring over a map of the city.

Take, for instance, the vendor stalls on President Street, next to the SAB World of Beer. It is a brilliant idea to provide stalls for hawkers but the problem is that they rely on people wandering about and that part of Newtown isn’t much used by pedestrians — and there is only one ATM in the whole precinct, next to the Market Theatre.

We are still a cash society (a Kashmir of sorts) and without access to mobile speedpoint machines the vendors are struggling and being frozen out. Perhaps when everyone else is gone, Prince will be the only fixture in Newtown. Perhaps then he will be king, but will he have any courtiers?