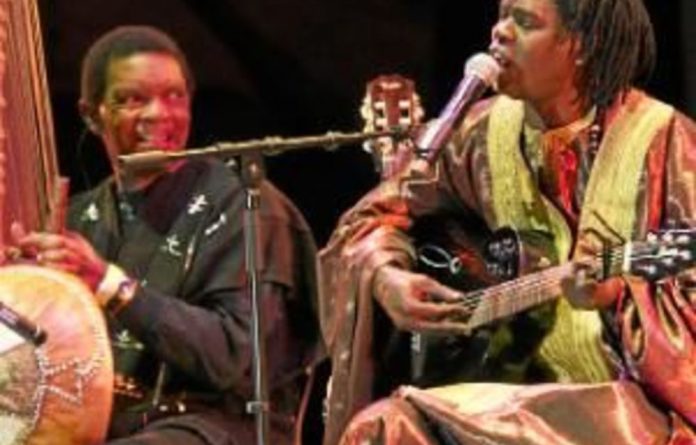 In his Anglicised French he could have been shouting “A freak, a freak, a freak!” because the day was characterised by both a celebration of African unity and a playful confusion about what this means.

The concert was hosted by the City of Johannesburg, SABC2 and the French Embassy, among others. Newtown Park had an urban intimacy, cradled as it is by the highway, billboards and the Workers’ Museum.

Throughout the afternoon a thin stream of people braving the winter cold gradually filled the park. The Mail & Guardian spoke to Senegalese musician Baaba Maal, one of the main acts, before the concert.

“For me African cities like Johannesburg, Abijan, Nairobi [and] Dakar are like places where all the tradition, and the people who grow up with traditional culture in their lives, came together without any plan,” said Maal.

“They create a new style of living because they are influenced by the cities, by the oldest people – and it’s kind of a new birth. But the tradition is always inside it; it never goes, it tries to survive and become something quite new.”

The concert, capturing this spirit, ebbed and flowed through short sets of 20 minutes each. Styles ranged across the Sowetan punk of Ree-Burth, the mbaqanga of the Mahotella Queens, the electro-blues of Toya, the kwaito of Professor and Malian folk of Habib Koite, among a half-dozen others. This diversity of regions and generations gave the day an extraordinary eclecticism, although it also created a fragmentary feel.

A particularly moving moment came when the Mahotella Queens, who play regularly in Europe but rarely in South Africa, announced: “This is a very exciting night for us, because at last we are at home. We’ve been waiting to play at home for a long time.” The Queens, whose ages are edging towards the late 60s, performed with a visceral energy that shamed many of the younger artists.

Maal appeared on stage in a golden robe, his flair and eccentricity underpinned by a voice of startling power. It surfaced as gravelly husk, lost in the noise of the crowd, but its ghostly cry slowly inhabited the park.

As the winter breeze flamed the cinders of the fires, a reverent hush passed over the audience. Maal’s father was a fisherman and Islamic muezzin, his mother a songstress, and his songs have the qualities of water and prayer.

“My father always told me, even at the time he agreed for me to be a musician, that everything you achieve and every material thing you get should be lying down on a spirituality, a belief of the beauty of life, the beauty of being together, the beauty of passing through the problems of life together,” he said. Joined by Pops Mohamed and Nigerian saxophonist Olufemi, Maal’s set offered one of the few collaborative efforts of the concert — a space for which the artists were calling increasingly.

A United Nations Development Programme youth emissary, Maal also emphasised the value of education and celebrated the strength of women in African politics.

In stark contrast to Maal’s spiritual diplomacy, the concert finished with kwaito star Professor and his crew, dressed in military-style outfits and dancing to fast incendiary beats. They raised the crowd to rapture with their hit Lento. The performance was elevating, although with a turbulent undercurrent. The distance between Maal and Professor, moving the audience in such radically different ways, demonstrated the possibilities of African music.

While the reverie continued, a Somali-owned shop was burned to the ground in Ramaphosa on the outskirts of Johannesburg. It was a dark warning of xenophobic violence emerging again in South Africa and a counterpoint to the celebration.

I asked Tumi Molekane whether Africa Day still had any meaning. His reply had an unsettling prescience: “Especially in a country with a history of insularity like ours, it’s important for [Africa Day] to be a social programme to say we are part of the continent and not only do we share our barbershops, our homes, our hospitals with other brothers from the continent, it’s also in the art, it’s also in the inspiration and in some of the philosophies.”

It seemed that the concert — with its contradictory voices, outbursts of energy and aggression and moments of quiet beauty — said something poignant about the African unity the day was celebrating.

This Africa Day, the continent is at a crossroads