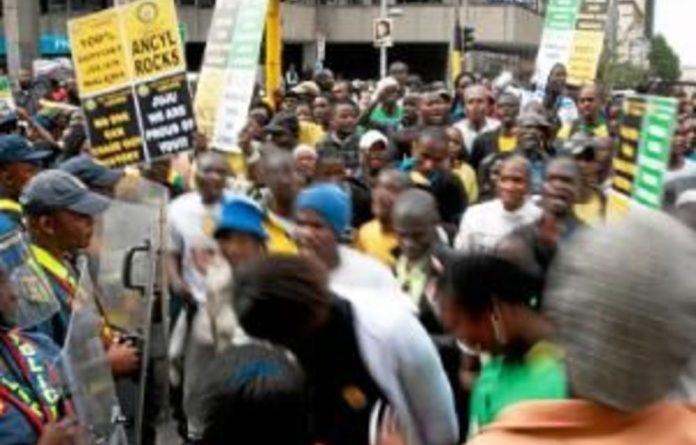 Mpumalanga Premier and ANC chairperson David Mabuza and Gauteng ANC secretary David Makhura are among the top ANC leaders accused of meddling in the affairs of the party’s youth wing ahead of its elective conference next week.

Last week ANC Youth League president Julius Malema, without mentioning names, complained that senior ANC leaders were working hard to influence the outcome of the youth league’s conference to be held at Gallagher Estate in Midrand.

ANC secretary general Gwede Mantashe denied that senior ANC leaders were involved in a plot to oust Malema. However, two leading ANCYL members insisted this week that Mabuza and Makhura are among those who have been plotting behind the scenes with certain league leaders to topple Malema. Mabuza and Makhura are said to have been pressing for Gauteng league chairperson Lebogang Maile to replace Malema.

The Mail & Guardian has been reliably told that Mabuza, who was once a close ally of Malema, has instructed youth league leaders in Mpumalanga to dump Malema because he opposes giving Jacob Zuma a second term as ANC president.

Ahead of its elective conference on June 16, we’ll be running multimedia features looking at the ANC Youth League’s main players. First up: Mandy Rossouw dissects the prospects of the youth league’s controversial incumbent president, Julius Malema.

It is understood that Mabuza and the Maile faction have agreed that Mpumalanga youth leader Ronald Lamola should be installed as the league’s deputy president in exchange for the province’s support of Maile as president. “The fact of the matter is that Mabuza feels indebted to Zuma, who decided to keep him on as premier after a series of scandals that have plagued Mpumalanga since Mabuza took over,” said the youth league leader, who asked to remain anonymous. “The only way to pay Zuma back is to campaign for his second term as president.”

Mmemezi allegedly asked to address the youth league’s provincial general council last weekend, but the request was rejected by the league’s Gauteng secretary, Ayanda Kasa-Ntsobi, who is said to support Malema.

Malema has also been nominated by his home province of Limpopo, by North West, Northern Cape and the Free State. Mpumalanga, Eastern Cape and KwaZulu-Natal are expected to finalise their nominations at the weekend.

Maile’s supporters are pinning their hopes on Mpumalanga and the Eastern Cape. It is claimed that at a party at The Rock nightclub in Soweto following the ANC’s Siyanqoba local government elections rally, several ANC provincial chairperson, including Mashatile and Mabuza, discussed supporting Maile’s campaign.

A senior government official said that at the meeting Mashatile had expressed uneasiness about backing Maile when he clearly did not have sufficient support to win the youth league presidency. “At that meeting, Paul said that Lebogang was going to embarrass himself. He asked the chairpersons to show him the numbers that Lebogang had got.”

Mashatile is said to be in a difficult position because Maile is his protégé and withdrawing support from Maile’s campaign is likely to fracture a long-standing relationship. “Paul really wanted to support Maile, that’s his boy. But he wanted to see the numbers and they don’t have them.”

Another ANCYL leader in Gauteng, who is close to Maile said Sports and Recreation Minister Fikile Mbalula had lobbied Mashatile to withdraw his support for Maile. According to ANC sources Mashatile has ambitions to be elected ANC chairperson at the party’s 2012 conference and is hoping for support from ANC leaders close to Mbalula and Malema.

Ahead of its elective conference on June 16, we look at one of the ANC Youth League’s main players: Gauteng sports MEC Lebogang Maile, who is considered one of the main contenders for the ANCYL’s presidency.

The ANCYL is expected to pass a resolution at its national conference backing Mbalula as the next ANC secretary general, a position currently held by Gwede Mantashe. The league is also unlikely to support Zuma for a second term as party president. However, expectations that Maile will automatically back Zuma’s second term are also not cast in stone, said M&G sources. “If Lebogang wins he’ll be indebted to Zuma, but in fact he doesn’t want Zuma and agrees that Kgalema Motlanthe is the future.”

A government source close to Malema echoed the league president’s claim that some senior ANC leaders who favour Maile as the next league leader had started plotting to disrupt the congress and install an interim leadership.

The source said that the ANC had added national executive committee members Nathi Mthethwa and Ruth Bhengu to the team that will monitor elections at the youth league congress and this had made Malema’s grouping suspicious.

Both Mthethwa and Bhengu are seen as sympathetic to Zuma and Maile. “The challenge is that if we say we don’t want them, it might cause unhappiness in some quarters and disrupt the congress. The strategy that we’ve come up with is that these two have got to be monitored at all times.”

Some ANCYL leaders have also raised fears that delegates are likely to give Maile, who, as chairperson of the host province is supposed to open the conference, a hostile reception.

Discussions are taking place to press Kasa-Ntsobi, who has now joined the Malema faction, to open the event.

The M&G has also heard allegations that there are plans afoot to disband the Gauteng provincial executive committee of the youth league if Maile loses at the conference.

Makhura denied ever attending caucus meetings convened by Maile’s faction. “That’s fishing. As ANC secretary, many ANC and youth league members come to see me. If you tell me who they are [Lebogang supporters who convened the caucus meeting], maybe I can tell you if they came to see me or not. I don’t attend caucus meetings, but that doesn’t mean I can’t meet Lebogang or Julius,” said Makhura. He refused to discuss his favoured candidate for the ANCYL presidency.

Mmemezi said he was not aware of any ANC leader in Gauteng who had attended the league’s provincial general council last week. He also dismissed claims that he was one of those who attended caucus meetings arranged by Maile’s faction. .

Said Mahlangu: “I left the youth league a long time ago, and I have no interest as to who is elected. For the record, I’ve never attended a single meeting of the ANCYL in the past few weeks.”

Mabuza and Mashatile were unavailable for comment. Mpumalanga ANC spokesperson Paul Mbenyane said he did not believe Mabuza would issue any instructions relating to leadership positions in the ANCYL.”DD [Mabuza] is a responsible leader and respect the autonomy of the youth league. We might have our own preference as leaders but we can’t interfere,” said Mbenyane.