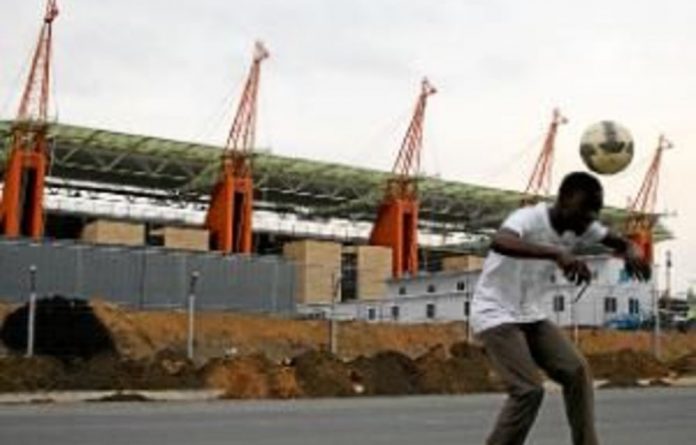 A year after hosting the 2010 Fifa World Cup South African taxpayers are still shelling out money for stadiums for upkeep costs or the “buying” of high-profile matches to fill the soaring sporting edifices.

The scramble by many of the country’s purpose-built World Cup stadiums for professional soccer and rugby teams has also led to a “market” in which glamour clubs such as Kaizer Chiefs command six-figure appearance fees — usually paid by the government.

Polokwane’s 2010 director, Ndavhe Ramakuela, told the Mail & Guardian that, in the absence of anchor tenants, the city had taken a “relaxed” position on negotiating sporting events at its R1.3-billion Peter Mokaba Stadium.

Ramakuela said the stadium was not profitable at this stage, but this was not a major concern. “We are willing to break even and, in some cases, not to break even, because the media exposure and marketing value for our stadium is much higher than the outlay. There are also benefits for the city, with hotels fully booked on big match days. And Polokwane is even developing a nightlife, something we never had before.”

The stadium, which has a maintenance budget of R23-million this year — with the city providing R17-million of the amount — needs two events a month drawing crowds of more than 15 000, to be financially sustainable, according to its presentation to Parliament’s sports portfolio committee.

It has so far hosted African Champions League soccer matches between SuperSport United and Egyptian giants Al Ahly as well as five matches involving Soweto’s Kaizer Chiefs, among other events.

But these appearances do not come cheaply. The M&G has established that Chiefs can charge as much as R500 000 for an appearance, plus accommodation and transport costs.

If games are “bought” — a growing phenomenon in South Africa that comes with “market prices” for certain clubs, say insiders — the general trend appears to be that provincial and local governments pay the appearance fees. Otherwise stadiums tend to negotiate aspects such as rental, takings at the gate and hospitality intake, which can make them less attractive options for clubs. According to Ramakuela, the provincial sports department also assists with “ensuring that the games take place and providing buses for supporters to attend matches”.

The Mpumalanga government has signed a sponsorship deal with Mpumalanga Black Aces to play their matches at the Mbombela Stadium.

Stadium manager Roelf Kotze said “buying matches isn’t the best model. We prefer to build ­relationships with teams like [Premier Soccer League side] Wits [University], but when that does happen [such as when Bafana Bafana played Thailand prior to the World Cup] city management help out.”

The Mbombela municipality, according to its medium-term budget, announced earlier this year, has allocated R11.6-million for “2010 legacy and flagship projects and initiatives”.

Presentations to the portfolio committee have also shown that the South African Football Association aims to make up to R2-million from a Bafana Bafana fixture. This is either through appearance fees or stadiums charging a “fixed rental”, with the gate fees split and the “majority, about 80%, going to Safa”, according to Mbombela Stadium’s project ­manager, Neil Fourie.

Kotze said the stadium, which was built for R1.2-billion and has an annual upkeep cost of R14-million, had hosted 22 rugby and soccer matches so far.

Stephan Pretorius, managing director of the R1.7-billion Nelson Mandela Bay Stadium, which has a maintenance cost of R21-million a year, said: “We have courted PSL teams, but it costs you — If the city has the money and can afford it, it happens, but overall we prefer to have a permanent PSL [team] from the area playing here.”

The Nelson Mandela Bay Stadium is the only new stadium with an anchor tenant — the Eastern Province Kings rugby Currie Cup team.

Pretorius said this had added an “exciting and stable foundation” from which the stadium was working to host events ranging from jazz concerts to Springbok Test matches. “We will be self-sustainable in two to three years,” said Pretorius.

South Africa’s smaller stadiums appear to be making a bigger success of filling themselves. Kotze said the “hunger for high-profile sports events in Mbombela means people come to matches”.

However, there are still major concerns over South Africa’s two most expensive stadiums: Cape Town’s R4.4-billion Green Point and Durban’s R3.4-billion Moses Mabhida. Both have been built far from soccer-playing communities, lack anchor tenants and have rugby ­stadiums nearby that generally draw capacity crowds.

According to Eugene van Vuuren, a technical adviser to the World Cup who was speaking in May at the Stadium and Venue Design and Development Conference in Doha, Qatar, the multipurpose use of South Africa’s World Cup stadiums is the sole path towards sustainability.

“We are sharing the stadiums and it is going well with all the existing stadiums. But the new ones in Cape Town, in Durban, until they get it right, where the rugby guys are joining the party, they will always have a tough time,” he told the conference.

Neither city appears close to wooing its Super 15 rugby team to the new stadiums. In Durban the Sharks have complained that Moses Mabhida does not have enough ­hospitality suites to match those of Kings Park rugby stadium across the road. They would thus lose money if they moved.

According to the portfolio committee’s hearing on the future of the World Cup stadiums, held last year, discussions between the City of Cape Town and WP Rugby appear to have broken down irrevocably.

Meanwhile, the construction process of both Green Point and Moses Mabhida stadiums has been the subject of a price-fixing investigation being conducted by the Competition Commission.