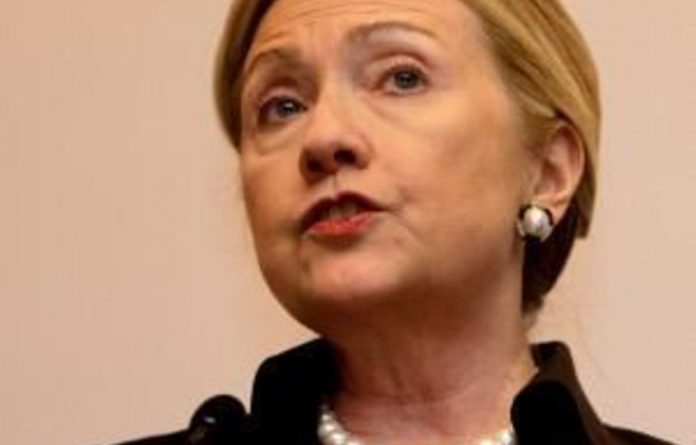 US Secretary of State Hillary Clinton on Monday urged African leaders to abandon Libya’s Muammar Gaddafi, saying it was time to live up to their pledges to promote democracy across the continent.

Clinton, the first United States secretary of state ever to address the 53-member African Union (AU), said unreformed African leaders were themselves at risk from the same tide of democracy sweeping the Middle East, proclaiming “the status quo is broken and the old ways of governing are no longer acceptable”.

“It is true that Gaddafi has played a major role in providing financial support for many African nations and institutions, including the AU,” Clinton said in her speech at the AU’s headquarters in Addis Ababa.

“But it has become clear that we are long past the time when he can remain in power.”

Clinton urged African states — many with longtime diplomatic and financial ties to the oil-rich Libyan strongman — to join the international coalition demanding his exit as the condition for a ceasefire.

She also urged them to close pro-Gaddafi Libyan embassies, expel his diplomats and to build ties with the Benghazi-based rebel National Transitional Council which the United States and its European and Arab allies are promoting as a future interim government for the country.

“Your words and your actions could make the difference in building this situation to finally close and allowing the people of Libya to get to work writing a constitution and rebuilding their country,” Clinton said.

Clinton’s AU speech came at the end of a three-nation Africa tour during which she sought to highlight the Obama administration’s drive to boost trade ties with Africa and encourage better political and economic governance.

Sudan talks
She praised many African countries for implementing reforms and moving away from a tradition of strongman rule. But on a continent where autocrats still rule from Equatorial Guinea to Zimbabwe, Clinton said more needed to be done.

“We know that too many people in Africa live under long-standing rulers — men who care too much about the longevity of their reign and too little about the legacy that should be built for their country’s future,” she said.

Clinton won applause for advocating women’s rights, and for speaking gamely on even as the lights flickered briefly out in the AU’s main meeting hall, leaving delegates in the dark.

US officials say the African Union has played a more constructive role in regional affairs including the political deadlock in Côte d’Ivoire and mustering peacekeepers for other regional crises.

On Libya, US officials have praised several African nations including Senegal and Mauritania for publicly declaring that Gaddafi must go.

But the AU’s position has been murkier and the organisation — long itself the beneficiary of Gaddafi’s largesse — has declined to join calls for Gaddafi’s ouster, instead accusing Western nations of undermining its own efforts to find a solution to the conflict.

Diplomats say the lack of a clear African voice on the Libyan conflict has complicated the Libyan crisis, where Nato has unleashed air strikes to support Libyan rebels demanding Gaddafi’s exit.

Clinton is scheduled to hold meetings in Addis Ababa on Monday on Sudan, where diplomats said President Omar Hassan al-Bashir agreed on Sunday to pull troops out of the disputed border region of Abyei before the south secedes — a move which could help reduce tensions.

The two sides have yet to agree on sensitive issues such as where to draw the common border and how to share oil revenues, leaving the potential for further conflict as the south prepares for formal independence on July 9.

Clinton, speaking before her arrival in Addis Ababa during a stop in Tanzania, said the US supported a proposal to put Ethiopian peacekeepers in the disputed Abyei region and called on Khartoum to withdraw its troops from the area.

At the AU, she repeated her call for both sides to redouble their efforts to resolve the situation “peacefully through negotiations, not violence”. — Reuters