Doctors vent anger at lack of security at hospitals 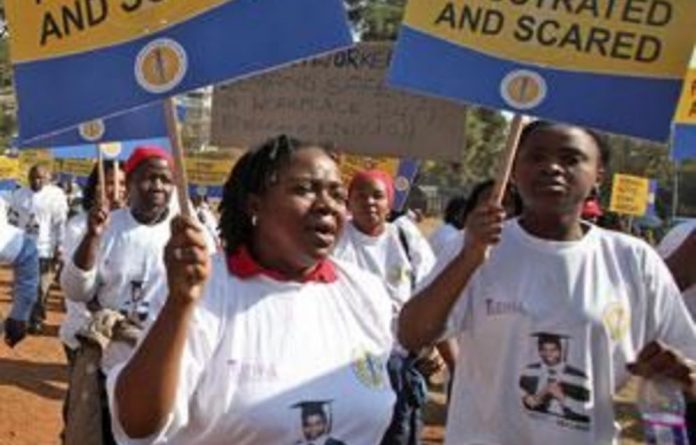 About 200 doctors converged on the Union Buildings in Pretoria on Wednesday in protest against poor security at hospitals.

The action, by the South African Medical Association (Sama) and the Junior Doctors’ Association, followed the fatal stabbing of Dr Senzosenkosi Mkhize while on duty at Middelburg Hospital on June 7.

A memorandum demanding greater security at hospitals was handed to Eugene Mthethwa, an official from the Presidency.

The doctors carried placards reading: “Served Notice, Going Abroad”, and “We risk our lives to save others”.

Sama spokesperson Dr Norman Mabasa said: “We are angry. I don’t think we can be consoled. We cannot have doctors being mugged, hijacked and murdered.”

‘Apathy and complete unwillingness’
He said the call for greater security was not only for doctors, but also for patients.

“We have had thugs coming into hospital to finish off their colleagues.”

According to the memorandum, Sama had repeatedly approached the health ministry on safety issues, but the response had been one of “apathy and complete unwillingness” to address their concerns.

The doctors demanded that police be deployed at all hospitals, and that private security services be terminated. They further wanted electronic scanners and metal detectors at all hospital entry points, as well as concrete palisade fences around all health care facilities.

In the memorandum doctors warned that failure to address security concerns would result in an increased exodus of medical professionals from the public service. — Sapa