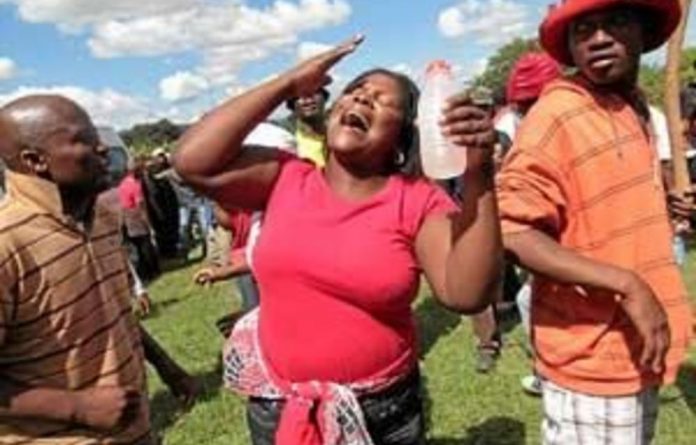 Swaziland’s labour unions are planning a series of further strikes to voice their feelings about proposed wage cuts and to lobby the government for regime change.

Sibongile Mazibuko, the president of the Swaziland National Association of Teachers, said the next protest action would take place over three days next week and their message was clear.

“We want this government to vacate office and we want regime change,” she said. “It’s no good just replacing the current Cabinet because the system itself is flawed and there are no checks and balances, which is why so much money is being lost to corruption.”

Swaziland is Africa’s last absolute monarchy in which political parties are banned and King Mswati III can personally appoint politicians.

But while the recent demonstrations have awakened the international community to Swaziland’s situation it may, in the end, be the country’s deepening economic crisis that finally brings about reform and multiparty democracy.

Following a steep drop in revenue from the Southern African Customs Union, landlocked Swaziland has found itself seriously short of cash and even the king, who is renowned for his luxurious lifestyle and 13 wives, has agreed to cancel plans for a lavish silver jubilee ceremony that was expected to cost in excess of R11-billion.

But that may not be enough to save the country from its spiralling debt and the reality is that until Swaziland embraces multiparty democracy, or at least agrees to unban political parties ahead of the scheduled 2013 election, it will struggle to find willing donors to ease its liquidity problems.

An African Development Bank loan worth R1-billion, which was expected to come through by July, may now arrive only in December, because of the government’s poor performance against International Monetary Fund (IMF) reform targets. The IMF first warned of a financial crisis in Swaziland last November and it has been working with the government to help implement its fiscal adjustment road map in a bid to lessen the impact of funding shortfalls.

Swaziland’s deficit swelled to 14.3% of gross domestic product at the end of April, well above the forecast 13%. Critics blame Mswati’s high personal budget (which was increased by R40-million this year) as well as poor management of the economy and rampant corruption among ministers.

A senior politician with close links to Mswati’s inner circle told the Mail & Guardian: “The economy is under major threat. Soon there will be no more cash for wages. The government is literally bankrupt. Things have been mismanaged so badly everything is depleted and there is nothing left. The government is unable to pay local creditors like construction companies or people supplying equipment to schools, prisons and hospitals.”

Veteran Swazi journalist Bheki Makhubu, who edits the Nation, a monthly magazine and one of the country’s few independent publications, said a decision this month by Mswati to intervene personally to stop a parliamentary and legal inquiry into alleged corrupt land deals by Prime Minister Barnabas Dlamini was another sign that “things were unravelling”.

“What this whole affair with the prime minister puts beyond dispute is that our tinkhundla political system is not working,” he said. “Other people can see that, which is why no-one will lend us money.”

Makhubu welcomed the efforts by civil society and labour movements to raise awareness about Swaziland’s situation, but said he believed that, in the end, it would be the regime which would defeat itself.

According to the South African-based Swaziland Solidarity Network King Mswati III was due to meet President Jacob Zuma in Pretoria on Monday to ask South Africa for a short-term loan. However, Zuma’s spokesperson, Zizi Kodwa, said no such meeting had been scheduled.

Teachers’ leader Mazibuko said it was possible the government had deliberately started a rumour about the king’s visit to get a loan in a bid to reassure Swazis that the economic situation was under control.