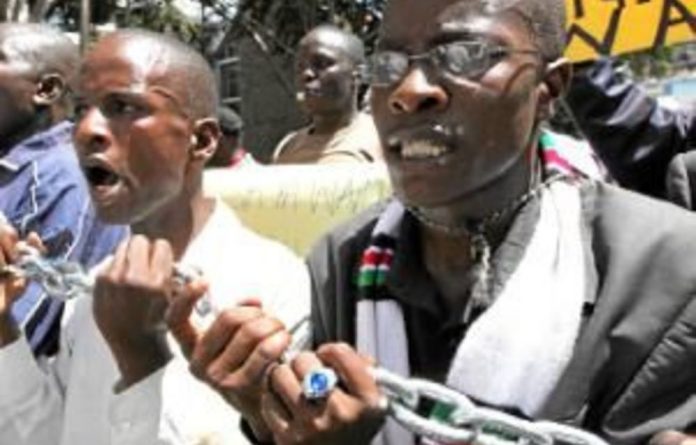 No matter how far you rise, the law is always above you, 18th-century English lawyer Thomas Fuller once said. Except, that is, in Kenya.

Following several months of investigations, the government announced that corrupt officials in the Kenyan education and health ministries stole up to $47-­million between 2005 and 2009.

Names have been given to the police, said the country’s finance minister, Uhuru Kenyatta, and they will be investigated immediately. But few Kenyans are betting on it. No government minister has ever been prosecuted for corruption in Kenya despite strong evidence against them and infamous cases — such as the Goldenberg scandal, which cost the country more than 10% of GDP in the early 1990s — are still being investigated.

“Kenya is good at talking about corruption cases,” said Teresa Omondi, deputy executive director of Transparency International Kenya, “but not at prosecuting anyone in them”. The revelations about the department of education first came to light in January 2010, yet the government issued no solid statement about the losses until this week. By accident, the statement coincided with a visit to the country by World Bank officials to inspect projects it funded.

A hundred officials at the department of education were involved, but the minister, Sam Ongeri, has refused to resign, even though he has been in his post since 2007. Meanwhile, the United Kingdom’s department for international development, which provided much of the funding for the education department, now refuses to channel money directly through Kenyan government systems. It may even try to recover the lost money.

“The UK government will push the government of Kenya hard for return of the UK’s share of lost funds,” it said in a statement on Wednesday. “No UK funds will go through government of Kenya financial systems until there is convincing evidence of substantial improvements in integrity and financial management systems. We have yet to see evidence of any such changes within the ministry of education.”

It seems a long way from 2003, when newly elected President Mwai Kibaki promised to make the fight against corruption a priority for his administration.

But eight years into power the ­situation seems to have gone from bad to worse under his watch.

Kenya has slipped down the rankings of Transparency International’s 2010 corruption perceptions index, falling to 154 out of 178 countries. Last year the Kenyan government said it could be losing $4-billion, nearly one-third of the national budget, to corruption.

After the adoption of a new constitution last year, which strengthened the government’s hand in fighting graft, many hoped that the situation would improve.

But according to some analysts the process of implementing the new constitution, which made the ­government and president’s office more accountable than ever, could be making things worse.

“We have a problem in Kenya in that we are trying to reform and democratise, but we are forgetting that there is a conservative status quo that is not happy with the liberalisation of power,” said Mwalimu Mati, chief executive of the corruption watchdog Mars Group Kenya.

“In 2008 we saw the worst of it when a dispute over an election could not be settled peacefully in court and people were willing to fight to retain power.”

In the violence that followed 1 500 people died. No one has been held responsible for the deaths, raising charges that a new culture of impunity is permeating the ranks of government.

“Impunity means complete freedom from all crimes becoming the system and it is that system which protects them,” said Mati. According to Transparency International more people are reporting corruption and the head of the Kenyan Anti-Corruption Commission made a strong case this week for the minister of education and a senior civil servant in the department to resign.

“But we need to move to another stage, where people are prosecuted,” said Omondi. “The fact that no stringent action is ever taken means there is a risk of us hearing about all this again next year.”

‘This thing almost killed me’