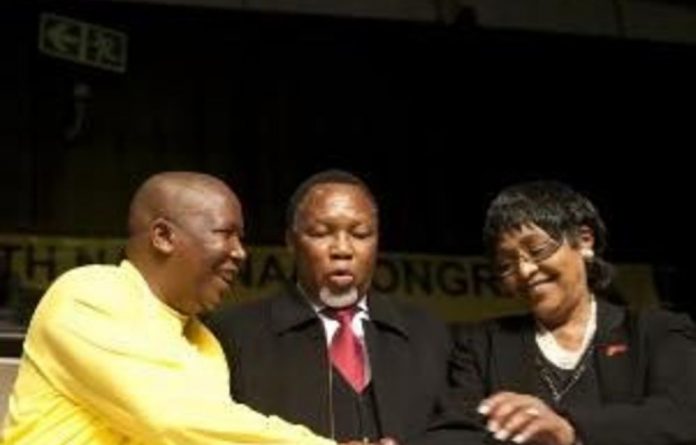 Agricultural organisations across the racial spectrum spoke out on Monday against African National Congress Youth League (ANCYL) leader Julius Malema’s land-grab talk, while the government, the ruling party and business were slow to respond.

Towards a youth league revolution

ANC Youth League president Julius Malema’s message in his closing address at the league’s conference was clear — the time for economic transformation is here, and the league plans to take the necessary steps to make their mandate a reality.

“We are trying to find a way forward, a common, united voice from white and black farmers. We want to go to government with one voice and talk one language,” Afasa president Mike Mlengana told the South African Press Association (Sapa).

“That language should be about the commercial viability of agricultural production in South Africa, so that we are both domestically efficient and so that we can compete globally.

“We are for sustaining the economy, not destroying it,” said Mlengana.

He did not want to comment specifically on Malema’s call for an end to the willing buyer, willing seller policy, but would rather stick with the land policy discussions it was already having with the government and other agricultural bodies.

“We can’t comment every time a politician says, ‘I will do that.’ It can annoy and confuse the various stakeholders.”

“It is true that land reform has not worked … not for the beneficiaries, not for the farmers and not for government. But no one has the guts to stand up and say it is because of the poor way it has been implemented by the land affairs department.

“It is not the willing seller part that has failed, it is the willing buyer part, because it was the job of totally incapable and inexperienced youngsters to close deals to buy land.”

De Jager said that about 30% of the country’s land was currently state-owned.

“And that is the most unproductive and neglected land in our country. Why do they now want to go and mess with a sector in the economy that is creating jobs?

“What kind of democracy would expect 37 000 individual farmers to pick up the bill for land reform?”

De Jager said Agri SA was meeting with the Landless People’s Movement on Monday afternoon to discuss how the two organisations could work together on land reform.

The movement said it would issue a statement later on Monday.

“I think it is scandalous that a person would make such comments, that so many people support him and that the government allows it.

“Once a person starts making such insane comments, he sends out a message to the rest of the world that South Africa is going down the same path of Zimbabwe and that land ownership does not exist. It is this kind of talk that kills job creation on farms and mines,” added Marais.

Aggrey Mahanjana, chairperson of the National Emergent Red Meat Producers’ Organisation, said he believed it would be “totally unfair” to take land without compensation.

“We won’t support that. We still believe there are many ways of getting land to the black farmers without really injuring the current owners of land, whether black or white.

“We don’t believe a farmer must hand over his land. That will be totally unfair,” Mahanjana told Sapa.

He said he requested a meeting on Monday morning with the government to ask it about Malema’s comments at the closing ceremony of the ANCYL conference on Sunday, where he was re-elected leader.

Malema warned ruling party leaders they must either follow league policies — which included land grabs — or face removal from office. He has in the past accused white people of being criminals for stealing land.

The war for economic freedom

The agriculture department told Sapa it would be only be available for comment late on Monday afternoon.

Wave of messages
Business Unity South Africa said it would issue a statement later, while the office of Herbert Mkhize, of the National Economic Development and Labour Council (Nedlac), said it would not comment.

ANC spokesperson Jackson Mthembu said the ANC “was not in the habit” of commenting on speeches, but would later on Monday issue a statement “commenting broadly on the conference”.

Opposition leader Helen Zille wrote on social networking site Twitter that she had received a wave of messages.

Her reply: “I have rec’vd a tweet tsunami re Julius Malema. My response is: don’t worry. He will be a catalyst for the political re-alignment SA needs.”

Deputy Science and Technology Minister Derek Hanekom tweeted on Saturday: “Whatever YL says, expropriation of land without compensation is not ANC policy, and along with many others, I’ll never support it. Never.”

Deputy President Kgalema Motlanthe on Sunday called for the debate around land reform to remain “within the Constitutional framework”. — Sapa