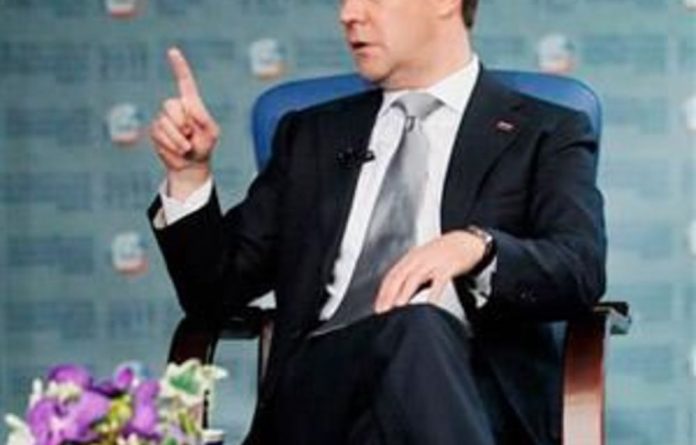 President Dmitry Medvedev on Monday added to the uncertainty surrounding Russia’s 2012 presidential polls, saying he wanted a second term but would not stand against powerful predecessor Vladimir Putin.

With just nine months left before the March elections, neither Medvedev (45) nor Putin (58) have announced their candidacy amid warnings from businesses that the uncertainty was now hurting the investment climate.

In an interview with the Financial Times whose full transcript was released by the Kremlin, Medvedev kept up the intrigue but also appeared to dismiss definitively speculation that he and Putin could both stand.

“I will tell you one thing: I believe that any leader who holds the post of president simply must want to run,” he said.

“Another issue is whether he will take this decision or not, this decision stands somewhat apart from his wishes,” Medvedev said.

The interview appeared riddled with mixed messages, with the Kremlin chief saying Russia needed political competition yet expressing concern that running against Putin could hurt the country’s development.

“The thing is that Vladimir Putin — both my colleague and old friend — and I still largely represent the same political force,” Medvedev said, adding that competing with his fellow Saint Petersburger would be “hard to imagine”.

“In this sense, competition between us could in fact harm those tasks and goals we have been pursuing for the past years. Therefore probably this would not be the best scenario for our country and this concrete situation.”

Putin’s place-holder
But he also said: “In the absence of political competition the foundations of a market economy are beginning to disappear.”

Medvedev last month held a major solo news conference and on Friday gave a keynote address to the Saint Petersburg Economic Forum, where some of his supporters hoped for a clear statement of his intentions.

But on both occasions he only gave the tantalising promise that the announcement would come “soon”.

President between 2000 and 2008, Putin had to stand down after serving two consecutive terms in office.

He installed his long-time associate and former chief of staff Medvedev in the Kremlin, becoming the all-powerful prime minister.

Long described as Putin’s place-holder, Medvedev earlier this year made several bold attempts to show he was his own man, notably slapping down Putin for his fierce criticism of the Western campaign in Libya.

Putin appeared displeased by such new-found independence and last week the two made a highly-mediatised show of renewed unity by taking a joint bike ride in the Moscow region.

Medvedev in the interview said that the intrigue should be kept alive for “a bit longer”, even though he acknowledged that in a country like Russia electoral certainty was critically important for investors.

Many observers believe the final decision on who will run in the March 2012 polls rests with Putin, whose political coalition will meet for a major convention in early September.

But Medvedev’s caution over his future sometimes sits awkwardly with his stark admissions that Russia is in need of radical change and, in particular, a historic process of decentralisation.

“A lot of leaders are used to governing in manual mode from the best of motives: practically on every issue they turn to the Kremlin, the president, Vladimir Putin, ministers,” he said.

“For many reasons people in our country have for centuries put their hopes in a good tsar, in the state, in Stalin, in leaders but not themselves.

“But we understand that any competitive economy is first and foremost means hope in yourself, that you yourself is able to do something. This is a challenge that every man responds to.” – AFP