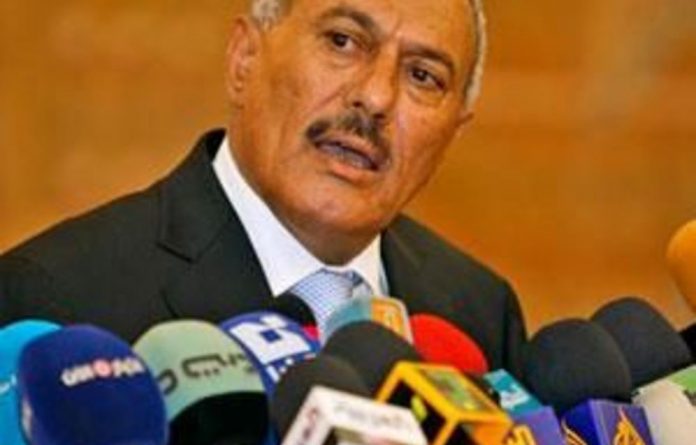 More than 60 al-Qaeda prisoners escaped from a south Yemen jail on Wednesday after they clashed with guards, killing one and wounding two others, security and medical officials said.

The prisoners fled the central jail in al-Mukalla, capital of the Hadramawt province, into the nearby mountains after they overpowered the guards and seized some of their arms, a security official said.

The official, speaking on condition of anonymity, had initially said that the prisoners fled after heavily-armed al-Qaeda fighters raided the prison to free them.

The jail is believed to house more than 100 al-Qaeda militants, 58 of whom have been tried in court and have received jail sentences, the official said.

“The regime is living its last days and wants to create chaos in Hadramawt province … there was no attack by al-Qaeda on the jail to free prisoners,” Bakazzuz said.

Another security official said that of the 62 prisoners who escaped, two were rearrested.

A medic at Iben Seena hospital in the city said a security force member was killed and two others wounded, while an al-Qaeda militant arrived at the hospital in critical condition.

Yemen’s army has been fighting heavy gun battles with al-Qaeda militants in several parts of the Arab nation, which has also been witnessing a massive uprising against the 32-year-old rule of President Ali Abdullah Saleh.

Battles are also raging between Yemen’s army and suspected al-Qaeda militants for control of the southern city of Zinjibar.

At least 100 soldiers have been killed since the violence in Zinjibar erupted more than three weeks ago, and 260 have been wounded, according to a military official.

Fighting between government forces and suspected al-Qaeda fighters in southern Yemen has displaced 45 000 people, the UN Office for the Coordination of Humanitarian Affairs (OCHA) said on Tuesday.

She said humanitarian agencies estimate that roughly 10 000 people have been displaced in Lahj province, 15 000 in Aden province and more than 15 000 around Abyan. — AFP