Time for mass action once more 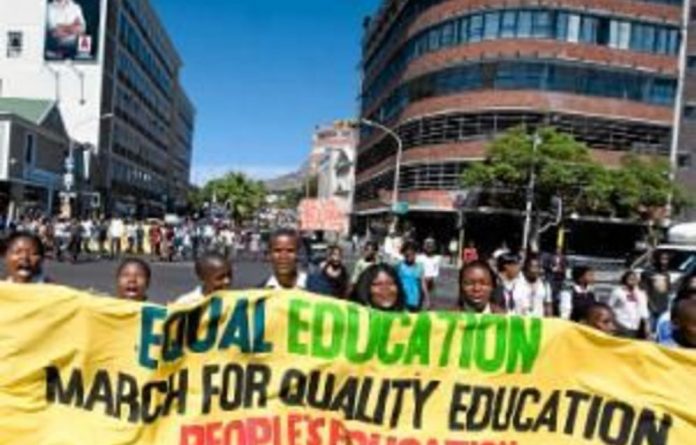 The struggle for equal and quality education was a prominent part of the uprising that broke the back of apartheid in the 1980s. But since democracy there has been little sustained community organising and mass mobilisation around education.

The People’s Summit for Quality Education to be held from June 25 to 27 in Khayelitsha and at the University of Cape Town (UCT) is a sign that this has begun to change. About 360 students, parents, teachers, activists and academics from across the country will attend the summit, which serves notice that a new phase in the battle to realise everyone’s right to a quality education has begun.

The recent report by Trevor Manuel’s National Planning Commission identified education and unemployment as the two most pressing problems the country faces. The commission’s recognition is itself arguably a significant development — a few years ago most South Africans would understandably have listed crime and HIV above education. The perception of education as a foremost national challenge reflects a growing understanding that many problems, including crime, HIV infection and youth unemployment, cannot be solved without a drastic improvement in education in poor and working-class communities.

What began in Cape Town as a campaign in 2008 to fix 500 broken windows in one Khayelitsha high school has become Equal Education, a national movement now active in five provinces that mustered 20 000 in a Human Rights Day march on Parliament this year to protest against the continued existence of mud schools and the absence of school libraries. Its members, mainly high-school students, have organised campaigns to get their peers to school on time. They have met every week for the past three years, developing in the process the self-confidence that comes from knowledge, and the fearlessness that comes with a measured but righteous indignation.

This weekend’s People’s Summit for Quality Education is being hosted by Equal Education as a way to broaden this movement and to sharpen it through the sharing of ideas and interrogation of the key challenges facing schools and communities.

Many of the older delegates, in anticipation of the summit, have suggested comparisons with anti-apartheid formations such as the National Education Crisis Committee and the Education Charter Campaign. This weekend’s summit aims to generate a similar activism — with the advantage we now have that was unavailable to previous generations, namely the constitutionally enshrined rights to basic education and equality.

Deputy Chief Justice Dikgang Moseneke recognised this when he said in April 2007: “Nobody has come to me and said, ‘My son is studying under a tree, there’s no chalk, there’s no blackboard, the teachers don’t come to school every day’. Nobody’s come here to say that.”

Far from saying that such problems do not exist, Moseneke was bemoaning the lack of action to tackle them. The real message of our summit is that politicians, educational experts and lawyers will not, on their own, succeed in addressing the challenges faced by millions of students and their teachers.

The fact that only a quarter of those who began school in 1999 passed matric in 2010 cannot be resolved by court orders, burdened bureaucracies and academic papers. All of these are crucial but ultimately insufficient without an engaged, informed and mobilised citizenry.

The summit will be chaired by Mary Metcalfe, the former director general of higher education and training and before that head of Wits University’s school of education. Those serving alongside her on the summit’s steering committee include:

The summit will open in Khayelitsha on June 25 with a keynote address by Yoliswa Dwane, head of policy at Equal Education, followed by Western Cape education minister Donald Grant and Minister of Basic Education Angie Motshekga, whose address is keenly anticipated because learners and parents alike have recently been pressing the minister to adopt new norms and standards for school infrastructure.

The programme will grapple with a host of topics, including early childhood development, post-school educational opportunities, language of instruction and the burden of poverty. But the central thrust of the three days will be to build a shared understanding of education as a fundamental human right, something to be struggled for and organised around, a community task as much as an individual responsibility, and a key test of citizenship, not only in pressuring the state to deliver but also in winning over the whole of society to a vision of a just educational future.

Advocate Geoff Budlender, whose courtroom skills helped to end the pass laws, will speak on the possibility of combining the law and activism to attain full education rights. Allan Liebenberg, who has served a lifetime as a politically engaged professional educator, will address the Holy Grail question of how to run a successful school in a poor community.

Equal Education members will describe the successes and challenges they have experienced in their campaigns and will share insights on strategies and tactics that can be replicated and built upon. Andiswa Kolanisi and Nokubonga Yawa, mothers from Macassar and Khayelitsha respectively, will explain their work in organising parents to hold schools accountable. Nthuthuzo Ndzomo will describe educational inequality as it is experienced by Equal Education members, and Dmitri Holtzman will review the organisation’s campaigns both on the street and in the courtroom.

Other organisations will also share their experiences. To name just a few, Upstart will describe its work in establishing a learner-run newspaper in Grahamstown, Sharing to Learn will recount how it established a library in rural Limpopo and City Year will present its post-matric community service project.

The animating idea of the summit is the one articulated by Nelson Mandela just 11 days after his release from prison: “Education is an area that needs the attention of all our people, students, parents, teachers, workers and all others.” In the coming years we will need to heed this call, whether as business people, unemployed parents, workers, learners, school governing body members or community activists.

Education in South Africa is not a zero-sum game. It is folly to believe that the twin crises of quality and inequality are tolerable so long as one’s own child is in a good school. Such thinking will doom democracy and economic development. It’s either win-win or lose-lose.

The People’s Summit for Quality Education is not intended to be a once-off event. We hope it will signal the beginning of process that will build a consensus about the priorities for action over the coming decade. Our national development and the lives of young people will depend on our efforts.