Romance and intrigue in Monaco … and The Eagles? 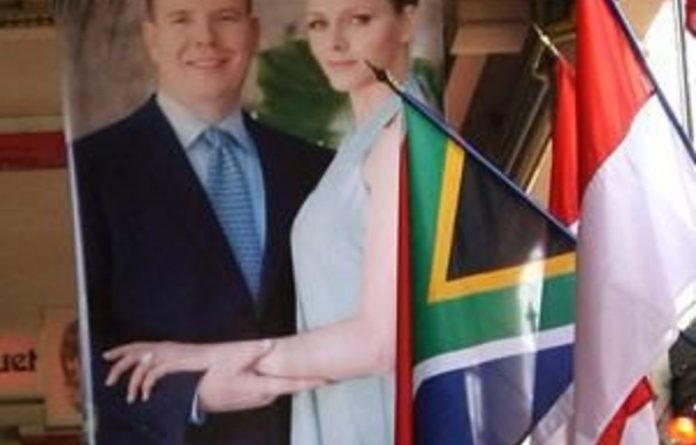 The Mediterranean principality of Monaco on Thursday began three days of royal wedding festivities marked by glamour and romance but also, thanks to last minute rumours, suspense and intrigue.

Californian rockers The Eagles were tuning up to mark the start of the party with a late night concert on the eve of Prince Albert II’s Friday civil wedding to South African swimming champ Charlene Wittstock.

After a 40-minute ceremony, Charlene will become Princess of Monaco at the moment Philippe Narmino, Monaco’s senior legal official and president of the state council, pronounces the couple man and wife.

On Saturday, the royal union will be solemnised by a very public Catholic religious ceremony, which the palace hopes will put paid once and for all to rumours that the bride has cold feet.

It will be the biggest day in Monaco since Albert’s father Rainier III married Hollywood actress Grace Kelly in 1956, but preparations have been clouded by claims that Charlene attempted to call it off.

Press reports suggested she had learned of some secret from Albert’s private life and decided to head home to South Africa, only to be intercepted by royal aides as she approached Nice airport and persuaded to stay.

The royal house and family friends dismissed the claim.

“These rumours have no other goal than to severely damage the reputation of the monarch and thereby that of Miss Wittstock and severely undermine this happy event,” said the palace, which is banking on a wedding tourist boom.

Wittstock’s father Mike also weighed in, insisting his daughter had been heading to Paris to do some pre-wedding shopping, and not fleeing home.

Albert, 53, has children with two other women but has yet to produce an heir, a matter of some concern to Monaco constitutionalists, who fear instability should the throne revert to his sister Caroline.

For nine centuries Monaco has been run by the Grimaldi family, the crown passing through the male line. In 2002, fearing Albert would die without an heir, Monaco changed its Constitution to allow a princess to inherit.

In the absence of any heir, Monaco would become a French protectorate.

Until Tuesday, all appeared to be going to plan. Charlene’s blonde locks, high cheekbones and impressively broad shoulders have graced the covers of magazines and celebrity guests are converging on the Mediterranean enclave.

The wedding was never going to compete for column inches with Britain’s marriage of Prince William and Kate Middleton, but the Monaco brand was looking forward to receiving a rejuvenating shot in the arm.

Palace advisor and television royal wedding commentator Stephane Bern also tried to dismiss the rumours, but not without adding to the speculation by citing rumours of another love child.

“A woman could easily pretend that she’s pregnant by a prince,” he told Le Parisien. “You can’t do a DNA test to check three days before a wedding!”

The Monaco royal clan has an unlucky matrimonial history.

Albert’s mother, US film star Grace Kelly — turned Princess Grace on her marriage to Rainier III — died in a car crash in 1982. Her daughter Caroline lost her second husband Stephano Casiraghi in a 1990 motorboat accident.

The other royal sister, Princess Stephanie, has also been unlucky in love, in the words of Wednesday’s edition of Le Parisien “marrying almost as often as she falls in love” and finding herself betrayed by her bodyguard lover. — Sapa-AFP

As mobile operators shift away from slower networks, Europe has been torn over its approach to the Chinese giant, which is a pioneer in 5G technology.
Read more
World

The news of Prince Albert and Princess Charlene's pregnancy comes after a turbulent period for the royal couple.
Read more
National

French presidential frontrunner Francois Hollande headed into the last round of his battle with Nicolas Sarkozy, with both candidates under threat.
Read more
Sport

Russian billionaire Dmitry Rybolovlev completed his takeover of Monaco on Friday and promised to invest at least $130 million in the struggling club.
Read more
National

Monaco's newly-wed Princess Charlene has vowed to carry out her royal duties in her own style but admits adapting to the role is taking time.
Read more
World