Better than the big five 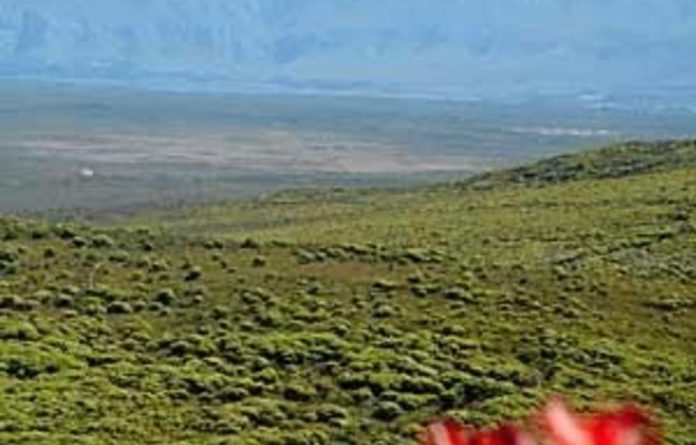 For five days and nights in February 2006, the fire blazed an 80km trail from the outskirts of Cape Town towards Africa’s southernmost point.

Then, unexpectedly, the wind changed direction — meaning workers and fire staff at the Grootbos Private Nature Reserve stood no chance against the flames.

Conference guests had to be hurriedly evacuated before the lodge complex was completely engulfed. Three apartments were destroyed and the five-star restaurant’s collection of Western Cape wines was reduced to a mountain of twisted glass.

So why is Sean Privett, Grootbos’s chief botanist, smiling as he recalls that dramatic night? “Hey, they were just buildings; they could be rebuilt. But that fire was also a whole new opportunity for rare plant species to germinate and flourish. We found something like 70 new species here in the months after the blaze.”

Like a proud parent, he opens his arms to the dense shrubland around him: “With the exception of our ancient milkwood forest, which is fire-resistant, you can say that all the plants here were born on the same day — February 6 2006.”

Privett is not the only person around here who is fanatical about flowers. This beautiful stretch of the Western Cape, known as the Overberg, is a prime spot for watching whales and great white sharks but for the many landowners in the area their priority is to protect the proteas, orchids, ericas and carnivorous sundew plants — to name but four of the region’s floral families that make up the fynbos.

Height of luxury
Grootbos’s conservation efforts began 20 years ago when Heiner Lutzeyer and his son, Michael, bought the original 123-hectare farm and Heiner started documenting its indigenous flora. Of the six new species that have since been discovered here, two — Lachenalia lutzeyeri and Capnophyllum lutzeyeri — have been named after him … not bad for an amateur botanist.

These days, the reserve encompasses about 1?750 hectares and guests are treated to the height of five-star luxury, including what may be the world’s finest view from a bathtub. But it is clear that conservation, including a strong commitment to educating and employing workers from the poorest local communities, remains the primary concern in what the Grootbos website calls this “botanic wonderland”.

There’s just one thing … I daren’t mention this to Privett but, after our drive from Cape Town through dustbowl-dry arable fields, I’m feeling a little confused. We have been greeted by a stunning mountainous coastline, certainly, but not the explosion of floral colour I’d been expecting.

Rather, it’s a plainish green moorland typical of parts of Scotland. Can we really be in the heart of the smallest but most precious of the world’s six designated floral kingdoms, with — according to my guidebook — species far outnumbering those found in the entire Amazon rainforest?

Fortunately, Grootbos lays on a trademark flower safari to introduce guests to the most striking flora in the reserve — and today we’re lucky enough to have Privett and his battered old Jeep guiding us.

First question, then: what’s the floral equivalent of seeing a lion?

Painted valleys
Graciously, Privett offers no hint that this inquiry might be unworthy of one of South Africa’s foremost botanical experts. Instead, at the highest point of the Grootbos reserve, he yanks on the handbrake and bounds off into the middle of the knee-high shrubland. I have to admit, though, that what appears uniformly green from a distance is anything but when you are in the thick of it. As we try to follow Privett’s identifying yells, bright flashes of colour and scent assault us from all directions. Among them delicate pinks and yellows of little erica plants, heather-like flowers that at the right times of year bathe whole valleys in a pink, yellow or white wash.

No two neighbouring plants, it seems, are ever allowed to hail from the same species. It’s as if the fynbos has been designed by a mad botanist who’s been overdoing it on the organic fertiliser.

“Over here!” Privett shouts, pointing at a large and slightly sun-withered white flower guarded by tall, bright pink spikes. “King protea, the biggest of all the Protea family and the national flower of South Africa — here’s that lion you were after.”

By the end of the safari, I’ve lost count of how many weird and wonderful species we have encountered — from spectacular crimson candelabra flowers that detach and roll along with the wind to the orange-flowered and not-at-all-potent wild dagga plants. In danger of joining the ranks of the florally obsessed myself, I ponder out loud why there should be quite so many different species of plant here.

“Er, we’re not actually sure,” Privett says, disarmingly. “There are so many factors — the lack of any ice ages, all the different types of nutrient-poor soil, the weather systems rolling up from Antarctica and the fact this region has never been farmed intensively. It’s just a really unusual cocktail.”

Speaking of alcohol — and it’s hard not to in the Western Cape, one of the world’s great wine regions — those nutrient-poor soils are also increasingly attractive to winemakers, who reckon tricky soils produce more interesting wines because the grapes have to work harder. But rather than proving an irritant to local conservationists, the neighbouring Lomond wine estate belongs to the region’s pioneering “biodiversity and wine initiative”, which pledges to protect rare and endangered plant species by only using sustainable farming methods.

Conservation efforts
Similarly, the nearby Flower Valley Farm, which grows indigenous fynbos plants for the cut-flower trade, is run by a public conservation trust, which ensures that neither the local fynbos nor workers are exploited for profit. Almost everyone, it seems, understands the fragility of the ecosystem here — and with good reason. One recent report counted the Cape Floristic Region as among the 10 places in the world most threatened by climate change — a predicted temperature rise of 1.8°C over the next 40 years would spark a dramatic increase in the number of wildfires like the one that did so much damage in 2006. The eco-equation says the fynbos needs fire to flourish but not too often or it will be wiped out entirely.

Maarten Groos is another veteran of that 2006 fire. The manager and co-owner of Farm 215, an even more secluded retreat with a stunning view down to the Lomond lake and vineyards, watched as the flames scorched his newly built lodges but he too talks only of the benefits it brought to this fragile landscape.

Perched in the middle of the fynbos, the facilities at Farm 215 are as uncompromising as they are luxurious — a refusal to add chemicals means the drinking water is a peaty yellow and the bath water a teaky brown.

After a delicious dinner on our first night, Groos gets out an album of photographs he took in the months after the fire, detailing the emergence of one particular flower species. The Moraea lurida iris only ever appears here immediately after fire has cleared the landscape of all the other, more bullish, plant species. Groos delights in showing off images of these beautiful deep-purple flowers — and describing the scent of rotting meat they give off to attract flies for pollination.

Yet the photographs show that, before long, these irises have disappeared again, not to be seen until the next major fire. Even to the uninitiated, staying in the midst of such a precious ecosystem, sharing the knowledge and hospitality of such committed conservationists, is clearly a rare privilege. —