Mind over batter for Dr Steelhammer 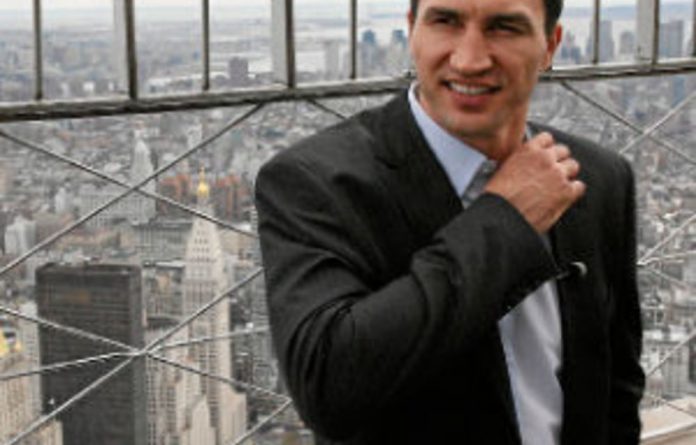 Boxing is a lonely business, so it seems right that reading Robinson Crusoe made Wladimir Klitschko want to see the world beyond the Soviet empire of his birth. To love the fight trade, though, David Haye’s opponent in Hamburg on Saturday night had first to experience the sport’s capacity to ruin and humiliate its protagonists.

“You work your ass off to get to the top. It takes a lot of time. The way up is very long. The way down is one step,” the younger of the Klitschko brothers says, casting his mind back to two quick losses in 2003-04. “All the years of work, and the respect collapses in one second. It’s like that in life, not just in boxing.”

This is a familiar prizefighter’s lament but seldom is it delivered in the context of so much success. Since “Dr Steelhammer” (his brother Vitali is “Dr Ironfist”) lost to Corrie Sanders and Lamon Brewster in a chaotic 13-month spell, he has won 13 heavyweight contests and strapped around his midriff the IBF, WBO and IBO belts. With Vitali holding the WBC title, Haye stands between the Klitschko clan and a complete annexation of the most prestigious weight division.

Behind the Rockyesque exterior of East meets West, though, Klitschko (35) is something of a renaissance man in a gym-bound world. The Dr in Steelhammer is no affectation. He explains: “I have a PhD in philosophy and sports science. At 14 I went through this really tough Soviet training system. A lot of my room-mates got psychologically broken or physically injured. Either you came through or you were out. I made my PhD work in the field of young athletes aged 14-19 because at this age any human is changing. The body is maturing and the psychology at this age is not stable. You can either make it or you can break it. That’s why my work is based on that.”

This is not the usual I’ll-knock-him-out rhetoric that precedes world heavyweight title fights. Haye (30) faces the biggest test of his 26-fight pro career, physically and psychologically. If Klitschko’s fists don’t bore through Britain’s WBA champion, his eyes probably will. When Haye calls him a “control freak” he is referring to Klitschko’s habit of psychoanalysing his adversaries.

“David Haye was talking all the time about me, playing mental games. I’m not playing games. He got really upset in Germany [at a media launch]. I was just telling him what to do for the press and he didn’t like it. ‘Dude, I’m just helping you,’ I said.

“But I have to tell you about mentality. You can train your psychology. If you train biceps they look strong. If you don’t they look sloppy. You lose or you win the fight — and anything in life — in your mind. I can look at how the person walks, how he speaks, his expressions. It’s a wisdom. Eyes are the mirror of the soul. So you can read a lot. Does the person have problems, is he worried? You put all these pieces together and you can make judgments on how the person is going to react.

“I train with young fighters because they have spirit in the ring, they’re wild, they have no fear. I can see myself in them. I spar and think: ‘I know exactly what you are going to do. I know the reactions.’ I think ‘when I break you, you are going to do this.’ We’ve all been there before.”

Not all. For Haye this constitutes a higher calibre of problem. He confronts Klitschko at a point when early doubts about the mental fortitude of the older man have been banished. Among his 13 victims since the Brewster fight are Samuel Peter (twice), Ruslan Chagaev, Hasim Rahman and Brewster himself, whose win in April 2004 was avenged. These ignominies turned Klitschko from a gifted but reluctant fighter into the dominant heavyweight of the past six years.

In an extensive interview he reflected: “Boxing is a chess game. In my 20s people asked: ‘Do you have a plan?’ Plan? I got in the ring and fought. Later on after I lost two fights in one year I was destroyed, completely destroyed. Inside I always believed in myself and I knew I didn’t belong in that state. My brother even told me after the Brewster fight: ‘That’s it, Vladi, for you. You had a good time, that’s it.’

“I knew that wasn’t right. It was just the beginning. It was something I had to experience and if I could take it off my record now I wouldn’t, I would keep it this way, because I’d never have become the person I became after those losses.

“It made me fall in love with boxing for the first time. I started with a new list. I changed the coach, I changed the team, I changed the training. You have two chefs: they both have the same recipe, one does it with love, the other just from the recipe. They taste different, one tastes better. If you wake up in the morning excited — this is another day in my life! – it can shift certain things. I was putting my gloves on in the ring and saying: ‘I love this game. I never felt this before.'”

An amiable wardrobe of a man, Klitschko reveals a sensitive side that Haye is unlikely to catch sight of. The story of how he joined his brother in the ring is touching and affirms that some boxers have to cultivate their warrior urges over time in defiance of the voices telling them not to climb through those ropes.

“My brother started kick-boxing and went to Orlando, Florida, to fight for the Soviet Union against the United States. He came back with all these colourful pictures and impressions of the US. I got excited. I wanted to travel, to see the world. My original idea was to go to medical school. I wanted to be an ear, nose and throat doctor. They said: ‘You will start as a nurse for two years, then you will learn the real job.’ I said: ‘Me as a nurse? No.’

“So I took my documents from the school. My next choice was to travel. But I got into the boxing gym, through my brother, and all the coaches said you’re going to be a big star, you’re going to be great. I thought what nonsense they’re talking. I wasn’t really into it. I didn’t like it. Kick-boxing one day, my brother said let’s put the gloves on. OK, I said. Man, he hit me right on the nose. I was like ‘Dude, I don’t want to do that. This is not my thing.’

“In those days I was very nervous before I went to the ring. In the ring, when the bell rang, something came out of me that wasn’t me, actually. You just protect yourself. Most of my [amateur] fights I won by TKO, by stoppage. There were guys who trained much more than me, and I was taking more breaks, but the results were there for me.”

His break came when Vitali was unable to take part in a tournament in Germany but told the organisers: “Don’t worry, I have a younger brother.” Wladimir stepped in: “I had 15 fights and it was my first big payday in boxing. I made a deal with a sponsor who said: you’re going to get 2 000 Deutschmarks. If you win you get 500 on top. If you win by knockout or TKO you get another 500. I’m 18 years old. I said: ‘I’ll knock them all out.’ They said: ‘You can’t. You won’t.’

“What do you think happened? I knocked them all out. In the bar after the final fight my sponsor said: ‘Dude, I didn’t expect that, but here’s the money.’ My parents were getting the equivalent of 300 Deutschmarks for their salary. I thought: OK, I’m the king of the world.”

Klitschko’s father was a military attaché who was moved around eastern Europe and obediently uprooted his family with each posting. Born in Kazakhstan, Wladimir was raised in what is now the Czech Republic and Ukraine: “I changed schools seven or eight times. It was always a new society, a new environment. You had to adjust yourself all the time. It was pretty stressful for a kid. But I had my brother. We were best buddies. In a new society you would look for friends but you always had your buddy-boy. He was born in Kyrgyzstan, then we moved to Kazakhstan, then to Czech, then to Ukraine. This experience made us who we are, in our relationship.

“I think Vitali was born as a fighter. I became a fighter. I never dreamed about it. After two years in sports school I thought I would go back to medical school but I kept to all the competitions and travelling and the big paydays came. It was a logical thing to continue. After the [1996] Olympics I thought there would be nothing more but I’ve stuck in the sport for 21 years now and I’m still young.”

But to achieve favouritism with the bookmakers in Hamburg, Klitschko had first to be written off, even by his own sparring partners. He says: “It comes from Muhammad Ali: eat your words, eat your words. I remember standing in the ring before my three defeats [he also lost a bout in 1998], and I could see the fear of the fighter because of me. I could see him collapsing mentally. Same in the fight. I could see it, I could feel it.

“Then, after those two losses [2003-04], I would go into training camp, and every sparring partner would be saying — openly — ‘I’m gonna fuck him up, I’m gonna kick Klitschko’s ass.’ I was like, WHAT? Our world is so up and down. There is no respect. They drove back home with broken noses and busted-up lips.”

Walking to the ring to fight Sanders, he says he was “thinking about vacations” after being cajoled into two fights in three months. “He shouldn’t have had a chance. It was my mistake; I was thinking about something else, not the fight.”

From disappointment came discipline, and a kind of love for the violence at his disposal: “I got hammered by the public. I had this anger in me to pay it back. And I’m not done yet.” —

Klitschko beats Haye to keep all belts in the family