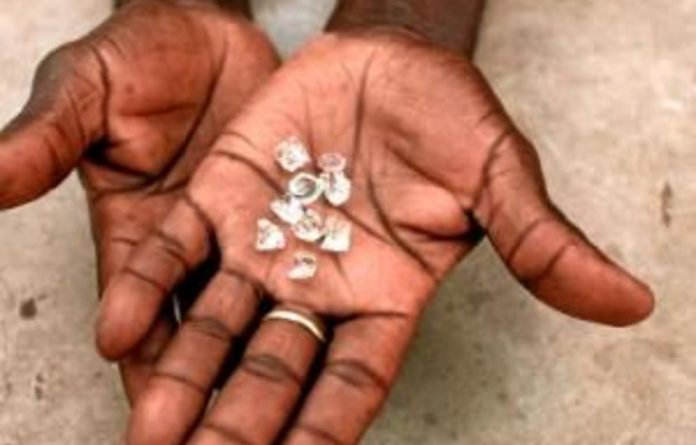 Susan Shabangu, the minister of mineral resources, took a “suicidal” position when she officially declared that Zimbabwean conflict diamonds were tradeable, according to activists.

She expressed her position on diamonds from the controversial Marange region in Zimbabwe at the intercessional meeting of Kimberley Process countries in Kinshasa last Wednesday during an address to civil-society organisations and delegates from the member states.

“The real-world implications of what Shabangu has done is to put South African diamonds on a par with Marange diamonds,” said Alan Martin, the research director of Partnership Africa-Canada, an Ottawa-based non-governmental organisation.

“South African diamonds going to Europe and America are going to be met with suspicion. That is going to be the kiss of death.”

Farai Maguwu, the director of the Centre for Research and Development in Harare, said: “If Marange diamonds are not cleared by the Kimberley Process plenary, and South Africa is importing them, the global industry won’t be able to distinguish between diamonds mined in South Africa and Marange diamonds. It’s self-defeating and ill-advised. It’s painting the South African diamond industry in the same light as Zimbabwe.”

Kathryn Sturman, the Africa resources programme head at the South African Institute of International Affairs, said: “This is really going to taint the South African industry. The diamond market is very sensitive and consumers care. The blood-diamond campaign is one of the strongest waged in recent years.”

She said that, with this move, South Africa was “giving up leadership of the Kimberley Process, having been a leading member in the past”.

South Africa is one of the few countries to recognise the statement made last year by Kimberley Process chairperson Mathieu Yamba, of the Democratic Republic of Congo, that the mining of the Marange diamonds was compliant with the process and therefore they were good for sale.

The European Union, the United States and Canada have ignored his statement as Kimberly Process decisions, according to its rules, have to be made by consensus. During her address, Shabangu apparently made several incorrect statements in her defence of the sale of Marange diamonds.

She said: “There has never been a process where any country has been subjected to review. [Zimbabwe] is the first time, so we need to find agreement.”

According to Martin, that was not true. “Several countries have faced similar scrutiny. The Republic of Congo was suspended in 2004 for irregularities and massive smuggling. Other countries that have had to submit to work plans to improve their minimum requirements include Ghana and Brazil.”

Shabangu also said: “While we acknowledge irregularities, we also believe Zimbabwe is compliant with the minimum requirements.”

Martin said that was at odds with the findings of the August 2010 Review Mission Report to Zimbabwe. The report found that “Zimbabwe has made significant progress — Overall, however, there is still some way to go to achieve full compliance with the minimum standards of the Kimberley Process Certification Scheme in the Marange diamond fields.”

Shabangu’s speech came immediately after the Zimbabwean minister of mines, Obert Mpofu, made a controversial speech that reportedly angered many countries’ delegations, including some from Africa. He said that Zimbabwe refused to have its diamond mines subjected to monitoring by the Kimberly Process.

“We have been monitored and certified compliant. Why should we continue with the monitor? What is there to monitor on a compliant mine?” he asked.

Many organisations walked out of the sessions following Mpofu’s speech and Shabangu’s subsequent defence. “In Zimbabwe there are violations of human rights committed by the state itself and the military,” said Marie Mueller, the co-ordinator of Fatal Transactions Network, a German umbrella non-profit organisation.

“In Marange, there’s pure use of physical violence against miners by the military,” Sturman said. “In 2008, the military killed over 200 people while taking control of the mines.

“Buying diamonds from Zimbabwe is funding the conflict. The military wages direct violence against local communities, and the wider concern is that this violence is keeping Zanu-PF in charge.”

This month the Mail & Guardian reported that Linda Makatini, who chairs the State Diamond Trader (SDT), allegedly bought a R1-million package of Marange diamonds. She is a former legal adviser to President Jacob Zuma and directs a company with his son, Duduzane.

On Tuesday, Futhi Zikalala, the SDT’s acting chief executive, told Parliament that Makatini’s purchase was “above board”.