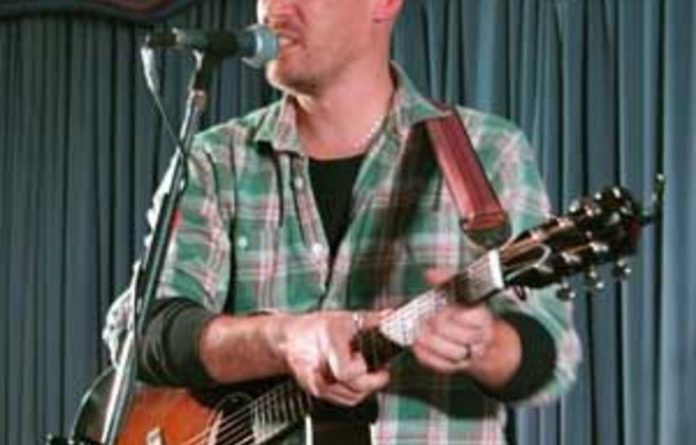 From sold out stadiums to obscure hotel conference rooms, from praise and worship pop to politically-charged antagonistic rock — things have changed for John Ellis, the former front man of Tree63.

Two years ago Ellis disbanded the Durban derived but internationally embraced contemporary Christian rock group, citing the need to branch out from the narrow genre of faith-focused rock. Moving on musically, also meant moving home from the US and starting fresh as a solo artist in South Africa.

Not trying to convert people
In the music business, however, fresh starts need to be fought for. No one knows this better than Ellis, who has come to perform on the Fringe of the National Arts Festival. If Ellis is to be wholly embraced as an independent artist, the transition will take time. “It’s different for me as a solo artist, trying to convince people that the guy from Tree isn’t trying to convert them,” said Ellis in a pre-gig interview.

At his Festival debut, Ellis navigated the shifty waters of audience’s expectation with his affable and cheeky charms:

“Those of you who expect John Ellis from Tree63, guess what? It’s just me,” he said. But shedding labels was clearly not Ellis’ primary agenda. As a veteran artist, he seemed comfortable in his own skin — not haunted by his past or anxious about his future. He played a mixture of new songs, Tree63 mega hits like, A Million Lights and a few songs of his favourite artists like Bruce Cockburn, Sting and the Police.

While at the Festival, Ellis is punting his new album, the aptly titled, Come out Fighting. “I am not a tree, I am a rolling stone,” asserts the first song of the album. But whether or not his audiences will believe this is yet to be revealed. The Festival booklet reads: “John Ellis (Ex-Tree63)” and one wonders if Ellis will forever be nagged by these clarifying parenthesis.

Distancing himself from his past doesn’t mean denying it. “It’s kind of like announcing you’ve come out of the closet”, joked Ellis about making the genre shift. It’s clear that this isn’t a musical midlife crisis, but rather the natural evolution of a deeply honest artist.

In terms of his faith and music Ellis is okay with blurry definitions. “I’m a skeptical believer instead of a nauseatingly, ‘I’ve got all the answers’ Christian.”

While sitting in the very intimate venue, watching the brazenly bald, flannel and Converse wearing Ellis, it was okay not to know exactly where he fit.

Minus the screaming crowds and the flamboyantly Christian lyrics, Ellis is the same guitar master and vocal soother he always was — only now liberated to explore the stretch of human experience through his music. “Playing in small, intimate venues is far more musically gratifying than big venues,” admitted Ellis, “How it will pan out, only time will tell.”