The evolution of democracy 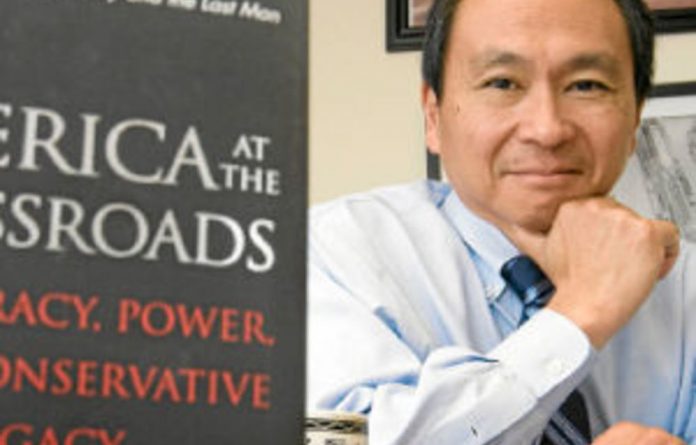 Francis Fukuyama is on day 24 of a world tour to plug his fat new book, The Origins of Political Order: From Prehuman Times to the French Revolution (Profile). He has just had breakfast with the Financial Times and is doing the rounds of TV studios.

Pausing only to get a cup of tea, we plunge straight into what for me is a rather intimidating seminar on global politics. It is a bit like being 20 again and, horribly underprepared, going to a tutor to discuss the church under Henry II.

Happily, Fukuyama fields my scattergun questions with polite aplomb. The only time he looks disconcerted is when the photographer asks him to start taking off his clothes to get a more relaxed look. Fukuyama does not really do relaxed.

Almost 20 years after it appeared, he is still best known as the author of The End of History. It was the book — perhaps even just the title — that turned a foreign-policy wonk and middle-ranking figure in the United States department of state into a global super-pundit. The 1992 publication, which expanded on a famous essay published three years earlier, was much quoted without being much read.

It was also much mocked after 9/11, when his critics pointed out that, far from being over, history seemed to be more urgent and unpredictable than ever. But they had misunderstood his thesis: he had not argued that conflict would cease but that, with the collapse of the Soviet empire, the ideological struggle was over. Liberal democracy was the only game in town.

The new book, the first of two ­volumes, explores how liberal ­democracies are established, how — in a phrase he uses prominently — countries “get to Denmark”. Fukuyama is trying to work out how states developed and why some became liberal democracies and others, notably China, opted for an authoritarian model.

Fukuyama argues that getting to Denmark relies on three things in harmony: a functioning state, the rule of law and accountable government. China’s problem was an overly mighty state — it got civilisation too soon. By a series of happy accidents, England got all three by the 17th century, exported them to the US through freedom-conscious settlers and provided a model for the rest of the world.

“The fact,” he writes, “that there are countries capable of achieving this balance constitutes the miracle of modern politics, since it is not obvious that they can be combined.”

Fukuyama seems to think that the long-term trend is towards liberal democracy and political freedom, but in the short term we may all be dead because democracies struggle in slumps.

“It is much easier to run a democracy and a capitalist economy that produces inequalities if you have long-term growth because, even if it’s not evenly shared, at least ­everybody is benefiting down the road. Without growth you return to a Malthusian world where it’s more zero sum. One person gets rich at the expense of another person, and then it becomes much harder to maintain democracy.”

So is he an optimist — the conventional reading after The End of History — or a pessimist?

“I’m basically an optimist because I do think there’s this historical modernisation process, and by and large it’s been very beneficial to people. But there are blips. History doesn’t proceed in a linear way.”

Fukuyama’s official job these days is as a senior fellow in international studies at Stanford University in California. He also sits on a dozen advisory boards around the world and is involved in putting into practice the overriding lesson of his new book, which is that building workable democracies is tough and relies on the grassroots being cultivated.

“The Denmark problem is a big one. People have unrealistic expectations for the kinds of improvements that can be made, and how quickly. They need to set more modest goals.” This new realism also feeds into the political journey he has undergone. In the 1980s he was a supporter of Reaganism and worked for the state department under both Ronald Reagan and George Bush Sr. He supported George W Bush in 2000 and favoured intervention after 9/11. But he has since renounced both Bush and the attempt to impose democracy on Iraq and Afghanistan.

He voted for Obama in 2008. Since moving from Washington to the West Coast, he does not intend to register as a Republican supporter but as an independent, perhaps even as a Democrat. For a conservative thinker with strong Republican links, a Rubicon has been crossed.

The turning point was the younger Bush’s mishandling of the Iraq war. “They didn’t launch the war to export democracy,” he says. “They launched it because of security concerns and attached this democracy justification as an afterthought.

“If you thought the problem through, you’d realise that this is a long-term, costly endeavour, and you would think long and hard before you took it on. Because if you just do it in a half-arsed way and give up after a few years, you’re liable to make things worse.”

Fukuyama made a powerful case against his former neoconservative allies in America at the Crossroads (2006). He still wants to “export American ideals” but “it ought to be done through soft-power instruments”. “We stumbled into Afghanistan and Iraq, which are basically tribal societies, and most Americans have no idea of how a tribal society operates.”

The mistakes of the Bush years were, he believes, a direct consequence of Reagan’s success in seeing off the Soviet Union in the 1980s, a high-stakes gamble that could have backfired – it succeeded only because of the liberalising role played by Mikhail Gorbachev.

“This minor political miracle happens — they take this very principled stand against a dictatorship, they’re not willing to compromise, and then the dictatorship collapses. That was their [the Republicans’] last experience of government. Then you had the Clinton years, and what they were hoping for was a repeat of that in Iraq. You take a principled stand against a dictator, you depose him, and then you have a similar eastern Europe-style upwelling of support.

“But they should have realised that the eastern European situation was an unusual one. The roots were there. They were basically Western countries that had been knocked off course by the Soviet Union, and it was natural that they should embrace Western values and democracy, whereas Iraq, because of the Israeli-Palestinian situation and the whole history of colonialism, was never going to embrace the West.”

Fukuyama’s father is a second-­generation Japanese-American whose own father fled the Russo-Japanese war in 1905 and started a shop on the West Coast before being interned during World War II. His mother met her husband when she came to study in the US.

As well as moving away from the Republicans (he says the party is “out to lunch at the moment”) he insists that he is not one of those Henry Kissinger-style academics who covets a big job in the government, of whatever hue. “I’ve figured out in the course of my life that the one thing I’m good at doing is writing books,” he says, “and it would be crazy to trade that in for something else. I can still contribute to the political debate.” If he had pat solutions for the world’s problems he might be tempted, he says, but there are no pat solutions.

Despite all the problems, he sees cause for hope. He points to South American presidents such as Brazil’s Lula da Silva, who gave up power when he could have created a ­political fix and carried on. He also welcomes the end of US hegemony, and believes the world’s new multipolarity could create greater stability.

He sees China as a “really interesting challenge — a very high-quality authoritarian government”. Can it challenge the liberal democratic model? “It’s theoretically possible,” he admits, “but it’s such a hard system to duplicate and I don’t think the Chinese believe that anyone can duplicate it, and therefore they’re not proselytising other countries to adopt it.”

For all the new mood of pessimism over the immediate prospects for countries caught up in the crash, he still holds to his belief that liberal democracy is the end point of political evolution and the system to which countries will continue to aspire.

China, the only viable alternative at present, “lacks a basic legitimacy in the same way that these Arab regimes do, because it doesn’t respect the rights of ordinary Chinese; it tramples on them all the time. There are lots of violent social protests that we never get to hear about, and the economic model is going to run out of steam because you cannot keep growing at 10% a year based on exporting all this stuff to people who can’t afford it anymore.”

There is no immediate threat to the Chinese system, he says, but in 20 or 30 years’ time it will come under severe pressure. Liberal democracy is likely to win again, proving that he was right about the “end of history” even in this most dramatic and history-making of epochs. That, at least, is the theory. —