Are the inmates in charge of asylum? 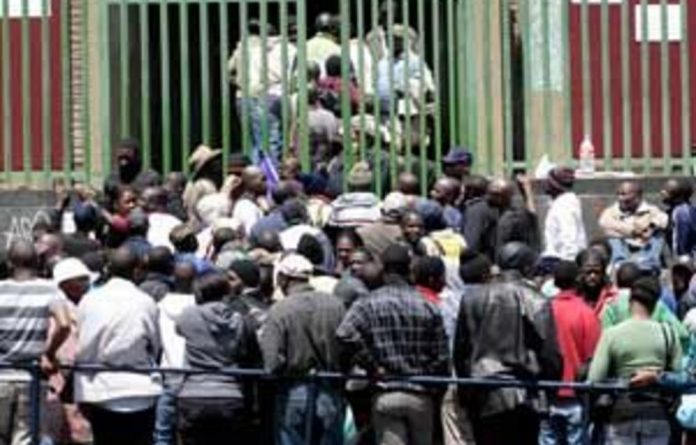 A long queue stretches outside the entrance to the Marabastad Refugee Reception Office, where asylum seekers and their families camp out for days, even on cold Pretoria nights, to apply for a Section 22 permit, their ticket to legal status and refugee protection in South Africa.

This is the scene that Pretoria-based human rights lawyer Gabriel Shumba sees almost every day. But worse is likely to come.

South Africa’s refugee-processing backlog is likely to take even more strain if the department of home affairs’s proposed Immigration Amendment Bill, currently before Parliament, is enacted. The amendment would shorten the time asylum seekers have to apply for refugee status, from 14 days to five.

Section 22 permits may only be granted at one of the country’s Refugee Reception Offices, which are already so overcrowded and understaffed that they struggle to address asylum seekers’ applications within the present 14-day limit.

“This change is onerous to someone who is fleeing political persecution; that time is too short,” Shumba said, describing the proposed limit as “insensitive” and “unreasonable”. Shumba is also the executive director of the Zimbabwean Exiles Forum.

South Africa has the highest number of registered asylum seekers of any country in the world. Nearly all asylum seekers in South Africa, about 95%, enter from Mozambique or Zimbabwe — through border posts, or illegally — according to home affairs.

South Africa’s policies on applying for refugee status are considerably more stringent than many other nations that receive large volumes of asylum seekers such as Canada, which allows asylum seekers 28 days to make similar claims.

Three week grace
Shumba said the government should allow asylum seekers a minimum of 21 days to apply for refugee status; on their arrival they are immediately burdened with the need to acclimatise to a new nation, find food and shelter, locate reception centres, and make their way through queues to complete their paperwork. Consequences for violating the provision, he said, would be immediate deportation or two years of imprisonment.

“An asylum seeker can reach a refugee reception office within five days from the time to reach a port of entry,” Minister Nkosazana Dlamini Zuma said in a briefing on the Immigration Amendment Bill in March of this year, adding that “from a port of entry, it should not take you longer than 24 hours”.

South Africa’s 1998 Refugee Act recognises three main types of refugees: those who are outside of their country of origin and are unable or unwilling to avail themselves of the protection of their country; those who fled their country because of external aggression or threats to public order; and dependents of those who fall into the above two categories.

South African and international law forbids the deportation of those who have expressed an intention to claim asylum, or those whose claim is pending. A fundamental aspect of refugee law is a person’s right not to be deported to a place where they might face threats of persecution or the risk of inhumane treatment, according to Human Rights Watch.

Deportation burden
Human rights activists such as Siphokazi Mthathi, South Africa director at Lawyers for Human Rights, spoke out forcibly against changes that might stall processing centres, insisting that backlogs at the centres lead to an increase in the number of the country’s unlawful deportations.

Backlogs could also increase if more centres in South Africa close. Home affairs closed Crown Mines, the only refugee reception centre in Johannesburg after the area’s business community filed an application to the South Gauteng High Court, complaining that the centre attracted migrants who littered and were a “nuisance and irritation”.

Business communities have filed similar applications about several other city reception centres, including the centre in Cape Town, which may also close.

As a result of Crown Mine’s closure, tens of thousands of refugees have made the 140km round trip from Johannesburg to Pretoria. The additional distance imposes an added financial and personal cost on asylum seekers, who often must leave family and their jobs to make the trek, which could take days with lines in queues.

In an interview in late June, Deputy Home Affairs Minister Fatima Chohan said the proposed amendment would make it more challenging for those who try to abuse the asylum-seeking process. She said the government was also considering establishing new committees to determine the status of applications, and opening centres near the country’s borders; however, action had not yet been taken.

Chohan admitted that oversights had been made by home affairs in the selection of sites for reception centres, but insisted that the department had not violated any rights of refugees in the process and remained “very committed” to ending internal corruption.

Employees at home affairs reception centres are notorious for taking bribes and harassing people standing in the queues, Shumba said. Centres had also experienced difficulty with employee retention because of poor working conditions such as cold temperatures and water leaks.

Although the impact the proposed five-day limit might have on deportations is unknown, the country is expecting a high number of deportations this winter: the department of home affairs plans to deport any undocumented Zimbabwean still in South Africa when the current amnesty period comes to a close at the end of July.