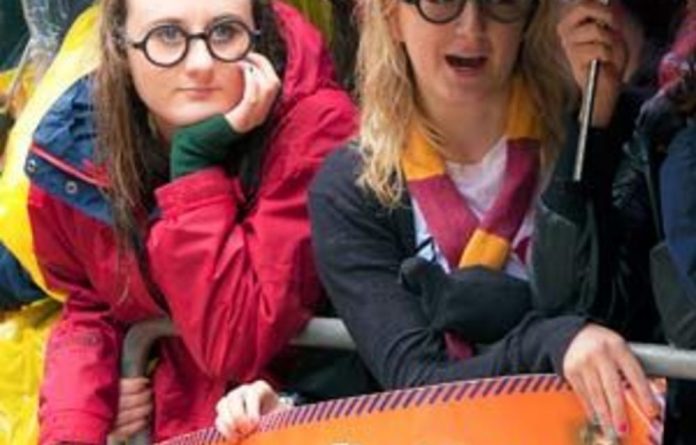 Thousands of fans braved rain and battled security restrictions in London’s Trafalgar Square on Thursday to say farewell to the boy wizard Harry Potter at the world premiere of the final movie in the record-breaking series.

Harry Potter and the Deathly Hallows — Part 2 is the eighth instalment — and the first in 3D — of a franchise that has generated more public excitement and media hype than any other in living memory.

The silver screen adventures of Harry, Ron and Hermione have been a magic pot of gold for Hollywood studio Warner Bros, with the seven films released so far grossing $6.4-billion in ticket sales and billions more from DVDs and merchandise.

For a generation of Potter fans, the movies have extended the wizarding world created by British author JK Rowling in her seven-book saga which began in 1997 and concluded in 2007.

More than 400-million copies have been sold around the globe, making Rowling the first author billionaire and providing a huge support base upon which the films were built.

Six-foot-high fences blocked off entrance to the square for the hundreds who arrived too late to get their hands on the red wristbands, which allowed access to where stars walked the red carpet among thousands of screaming Pottermaniacs.

“I’m just going to stand here all night on this little ledge,” said 16-year-old Lauren Kent, who arrived too late to acquire one of the prized wristbands and was perched at the base of a column across from the square.

Thousands of die-hard fans lucky enough to make it into the packed square — some in full regalia from the fictional Hogwarts School of Witchcraft and Wizardry — screamed out the names of characters and those of stars such as Daniel Radcliffe as they walked the red carpet to a raised platform.

“We’ve grown up in the Harry Potter generation — I read the first book when I was five so now it’s weird that it’s coming to an end … like the end of childhood,” said Rhys, an 18-year-old who braved the rain in London’s Trafalgar Square.

The young actors strolling among the fans and hundreds of journalists and cameras said they too were struggling to get to grips with a post-Potter world, despite being A-list stars with huge fortunes.

“I’ll just miss being Hermione and getting to live her life and in that world and getting to bring to life a set of books that I myself loved so much,” a short-haired Emma Watson told Reuters television after strolling the red carpet in a champagne-coloured gown with a sheer top.

The actors who were cast in their roles aged between nine and 11, have all spoken about breaking with the Potter franchise.

The 22-year-old Rupert Grint, who plays Potter’s main sidekick Ron Weasley, said he felt he was stepping out into the real world from a kind of bubble that has enveloped a huge portion of his life.

“It’s hard for me to remember life before this and for it to come down to this two-hour and 10 minute film … I don’t know — it’s very strange for me,” he told Reuters television.

Death and destruction
Consistent with the gradual trend towards darker content as the franchise progressed, Deathly Hallows — Part 2 climaxes with an intense battle between good and evil fought at Hogwarts.

Buildings are flattened, wizards and witches die and Harry steels himself for the final showdown with his evil nemesis Lord Voldemort, played by a snake-like Ralph Fiennes who called his character a “high definition villain”.

Radcliffe (21) who has played Harry Potter throughout the last decade, was enthusiastic about the conclusion.

“I think of it as being light years ahead of any of the other films in the series,” he told a London news conference on Wednesday via videolink from New York where he is appearing in a Broadway production.

“In terms of quality this is the best film we’ve ever made, so I’m thrilled that we’re going out on this positive note.”

Whether critics agree remains to be seen, with most reviews coming out after the premiere.

The Daily Telegraph, however, featured an article by Philip Womack which described Deathly Hallows — Part 2 as “monumental cinema, awash with gorgeous tones, and carrying an ultimate message that will resonate with every viewer, young or old: there is darkness in all of us, but we can overcome it”.

The movie opens in some territories on July 13, and in the key British and US markets on July 15.

Rowling has said she has no intention of writing another Potter novel, and David Yates, director of the last four Potter movies, told the news conference that he believed the film cycle had closed for good.

Rowling’s wizarding world will not disappear altogether, however.

She recently unveiled Pottermore, a website allowing fans to interact with the characters and storylines, and will finally retail the stories as ebooks exclusively on the site.

Perhaps British actor Alan Rickman — who has played sneering Professor Severus Snape since the very first film — summed up the Potter phenomenon best on the night.

“This thing has a beginning, a middle and an end. That’s why it’s a good story and this is the end.” — Reuters