SA soldiers to stand guard at the birth of South Sudan 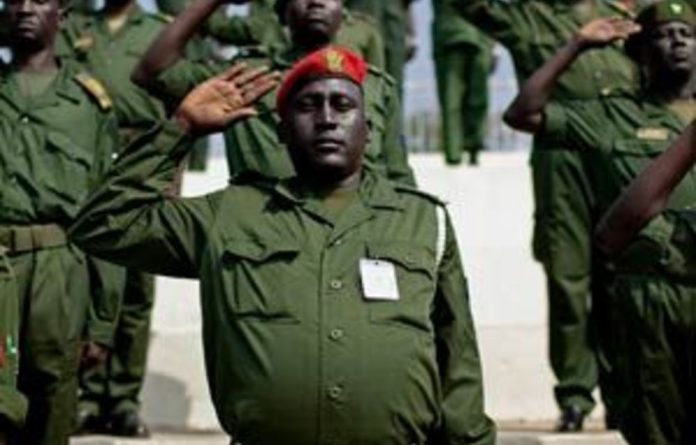 South African soldiers have arrived in Juba, South Sudan, to provide extra security to the region as the world’s newest country formally emerges onto the African stage.

According to South Africa’s consul general Gabriel Setlhoke, the soldiers will be assisting with security measures during the independence celebrations, which kick off on Sunday July 10 and conclude two days later.

The fledgling country’s formal declaration of independence is due to take place on July 11.

The South African delegation, said to already be the biggest in Juba, will include President Jacob Zuma, Minister of International Relations and Cooperation Maite Nkoana-Mashabane, several other Cabinet ministers and the presidential special envoy to Sudan, Charles Nqakula. The South African National Defence Force (SANDF) would also be assisting with the accreditation of dignitaries. Eighty delegations — including 30 heads of state — will be present at the declaration ceremony.

Asked whether this would strain relations with the National Congress Party in Khartoum, Setlhoke said that South Africa’s high level delegation had been in Khartoum since July 8, and that “everybody is on the same page, and understand that it is for the safety of the South Africans, principally, that the security forces are here.”

According to Setlhoke, the South African government had also been asked to secure South Sudan’s airspace for the celebration period.

“We told the government of South Sudan that if we were to help, it must be something that the South Africans can take care of alone, not together with other countries which would be difficult to coordinate. They approached the United States and other countries for help with securing their airspace but they said ‘no’. We said we would do it because it is critical for the staging of independence.”

To date, the South Sudan government-in-waiting has only had control of its own airspace to an elevation of 4 500m. The air traffic controllers currently stationed at Juba International Airport were trained in South Africa, but according to Setlhoke, “South Africa will have to bring in the equipment and manpower to secure the airspace above that to the height these planes carrying presidents will fly 10 500m to 10 800m.”

He said it would be expensive but that, “once you offer your services, you don’t make it a big cost issue for the person you’re doing the favour for”.

Different from the DRC?
South Sudan’s minister for roads, Anthony Lino Makana confirmed that a radar capable of tracking the airspace up to a distance of 12 000m had arrived in the country on Wednesday. He said it would be a permanent fixture but would not confirm whether it was a gift of the South African government.

The Department of International Relations and Cooperation (Dirco) would not give an exact figure for South Africa’s contribution to the celebrations. The South African government is known to be sensitive about the fact that it could not demonstrate any furtherance of national interest in spending a fortune on mediation and post conflict reconstruction and development efforts in Burundi and the Democratic Republic of Congo (DRC).

Setlhoke insists, however, that South Sudan will be different.

“The situation here is well thought out. The Comprehensive Peace Agreement signed between the north and the south is internationally recognised, whereas such a document never existed between warring parties in the DRC. The DRC also lacked regional support whereas here it occurs in abundance.

“You can see this dedication to seeing a positive outcome in the Ethiopians agreeing to send troops into Abyei. The South African government also has a good relationship with Kenya, the regional power, and this has resulted in a good synergy in regard to South Sudan. The policies of [the government of South Sudan] are also very clear and we have said we are going to walk with them on this clearly defined path,” he said.

At the top of Dirco’s foreign policy priority list is the African Agenda, which extends to supporting African countries mired in conflict or in the difficulties of emerging from conflict.

The Zuma-led government has also associated itself with the objective of positioning South Africa’s domestic challenges, such as unemployment, at the core of its foreign policy. How this will be done has not always been well articulated but it undoubtedly includes receiving a dividend in the form of business opportunities for money and assistance ploughed into other African countries.

So far this dividend is not apparent in South Sudan.

“The only three major South African companies here so far are SABMiller, landmine clearance company Mechem, and MTN — though MTN is based in Khartoum, where it is licensed. With independence all licenses now have to be renegotiated,” Setlhoke said.

SABMiller brews the popular local beer White Bull and is expanding its operation to meet demand. The possibility exists that MTN is being smiled on by the South Sudan government. Sources at Vivacell and Gemtel, the two cellphone operators currently most active in South Sudan, say they have been told to reapply to the new government for their licenses, at a cost of $200-million.

“It’s ridiculous. We have been headquartered here for years and yet we are now put on the same footing as companies like MTN, who have remained in Khartoum,’ said the source.

Beneficiaries of Sudan’s potential
South African foreign policy does not make assistance contingent on being given infrastructure development and minerals extraction contracts.

This is the last part of Dirco’s acronym in action — cooperation. The training programs form part of a trilateral agreement between the South Africa government, South Sudan, and the Norwegian government.

According to local business leader and public intellectual Mou Ambrose, few people understand the depth of the relationship between the Sudan People’s Liberation Movement (SPLM) and South Africa.

‘In the Sudan People’s Liberation Army (SPLA) there is a Mandela One battalion and a Mandela Two battalion. The connection with the SPLA goes back to Mandela’s visit to Ethiopia in 1962, where he received military training alongside SPLA leaders.’

The modern connection, according to South Sudan spokesperson Peter Bior, goes back to a visit SPLA leader John Garang paid to Mandela after his release in the Nineties, which resulted in the ANC offering the SPLM their former headquarters in Harare as a liaison base for the southern African region.

“Another thing that is poorly understood,” said Ambrose, “is that the Sudan used to be discussed as an Arab issue, and while the African Union is sensitive to Arab issues, it has in the case of South Sudan been most dedicated to realising Sudan’s African narrative”.

“As you can see, through their collective efforts they have succeeded, and you will now see the African potential of Sudan begin to explode. The beneficiaries will be the countries, many of them with similar histories, that shared in that quest for liberation,” said Ambrose.