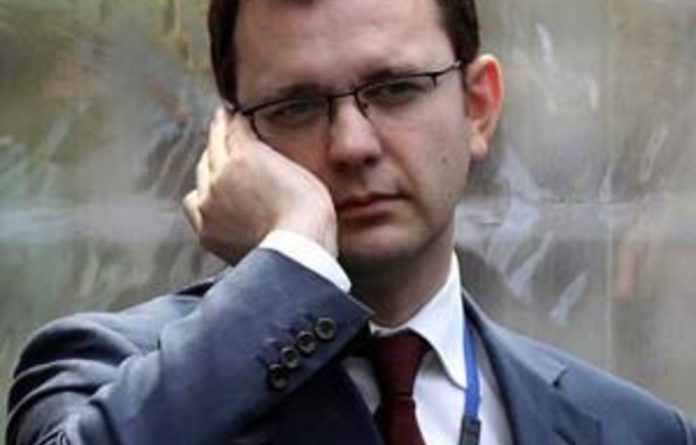 British police arrested Prime Minister David Cameron’s former media chief on Friday over phone hacking at the News of the World as the scandal at the doomed tabloid threatened to engulf Downing Street.

Police also re-arrested former News of the World royal editor Clive Goodman, who was jailed in 2007 for phone hacking at the tabloid, over corruption allegations, Scotland Yard said.

Goodman, 53, was apprehended at his house in Surrey, south of London.

Goodman was first arrested in August 2006 along with private investigator Glenn Mulcaire over allegations they hacked into the mobile phones of members of the royal household, including those of princes William and Harry.

Five months later the reporter was jailed for four months and Mulcaire for six months after they admitted intercepting voicemails.

The arrest of Andy Coulson came shortly after Cameron told a press conference that he took “full responsibility” for hiring the former editor of the Sunday newspaper who quit as Cameron’s communications director in January, citing pressure over the phone hacking allegations.

Cameron also announced a full public inquiry led by a judge into the scandal at the News of the World, which media baron Rupert Murdoch killed off on Thursday in a stunning move apparently aimed at limiting the damage to his empire.

London’s Metropolitan Police said in a statement that officers investigating the scandal at the paper had arrested a 43-year-old man by appointment “in connection with allegations of corruption and phone hacking”.

The corruption allegations refer to alleged improper payments to police officers by the paper.

Coulson was being held in custody at a south London police station, the statement said.

Police sources confirmed that the statement referred to Coulson, who has repeatedly denied having any knowledge of the hacking.

The 168-year-old News of the World will print its last edition on Sunday, brought down by allegations that it hacked the voicemails not only of royals and celebrities but also a teenage murder victim and the families of dead soldiers.

Cameron faced one of the toughest grillings of his 15 months in power at a press conference in Downing Street on Friday, with most of the questions from reporters focusing on his decision to hire Coulson.

The street-smart Coulson quit as editor of News of the World in 2007 after the jailing of its royal reporter and a private investigator over hacking and was hired by Cameron’s Conservative Party months later.

“He resigned from the News of the World because of the things that happened on his watch. I decided to give him a second chance — and no one has ever raised serious concerns about how he did his job for me,” Cameron said.

“But the second chance didn’t work out and he had to resign all over again. The decision to hire him was mine and mine alone, and I take full responsibility for it.”

Cameron also said that after reports that Rebekah Brooks, the embattled head of Murdoch’s British newspaper wing, had offered her resignation over the claims, “in this situation, I would have taken it”.

Cameron said he would set up a public inquiry and also a second inquiry into the way in which the press in Britain is regulated in the future.

“It’s right and proper to establish a full, public inquiry to get to the bottom of what happened. A judge needs to be in charge so there’s no question that it is totally independent and things are done properly,” Cameron said.

“These are the questions that need answering: Why did the first police investigation fail so abysmally? What exactly was going on at the News of the World? And what was going on at other newspapers?”

Murdoch’s shock closure of the News of the World was widely seen as a way to quell the scandal and save the bid by his News Corp for control of the satellite broadcaster BSkyB, on which the British government is due to decide.

Shares in BSkyB plunged 3.94% to 780.5 pence in late morning deals Friday, topping the fallers board on the FTSE 100 index.

Murdoch’s Australian arm on Friday distanced itself from the News Of The World scandal, warning “unethical and immoral” conduct would not be tolerated.

Murdoch’s son James announced on Thursday that Britain’s biggest selling Sunday newspaper which shifts around 2.7 million copies a week will print its last edition this weekend.

Two hundred staff will lose their jobs. The BBC quoted sources as saying Murdoch would replace it with a Sunday edition of The Sun, his daily tabloid, which is Britain’s biggest selling newspaper.

Britain’s press on Friday mourned the passing of their scandal-hit comrade despite its misdeeds.

“Yesterday a little bit of England died, and it is a moment to mourn,” the Times said in its editorial. “At their best they produced great stories, and sometimes exposed great wrongs.”

The Daily Mail ran with the headline “The Paper that Died of Shame”, and bemoaned the “downfall of a fine British institution” while The Daily Telegraph opted for “Goodbye, cruel World” on its front page. — AFP