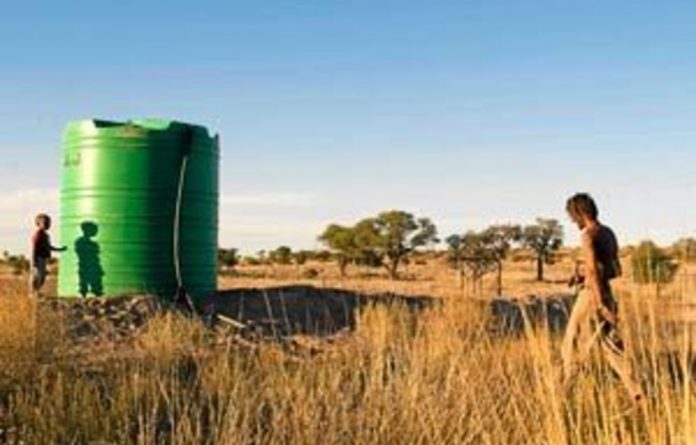 A poisonous brew of politics and tenderpreneurship in one of the Northern Cape’s most far-flung, arid and impoverished municipalities could compromise the provision of boreholes and piped water to 20 000 people.

Two companies both hold letters of award for the estimated R300-million project from the Joe Morolong local municipality, a rural area adjacent to the Botswana border.

As an eight-month legal and political battle over who won the massive tender rumbles on, a source close to the municipality fears that key funders, including two government departments and a local mining company, are considering spending their money elsewhere.

Meanwhile, the cash-strapped municipality has run up legal bills of more than R800 000 fending off lawsuits and is faced with a R2.5-million damages claim, further compromising its ability to deliver basic services.

The seeds of the dispute were sown on November 1 last year, when acting municipal manager Tatolo Gopetse awarded the construction contract to a joint venture between HT Pelatona and Ditiro Tsa Ka.

Municipal manager Pabalelo Sampson was halfway through four months of maternity leave at the time. On hearing of the tender award to Pelatona-Ditiro Tsa Ka, Sampson returned to work on November 8 and immediately issued a letter of award to Khethwayo Construction.

Both companies believe they won the tender and cite as proof their respective letters of award in court papers currently before the North West High Court in Mafikeng.

Rearguard action
The papers reveal that Sampson fought a rearguard action for months, defying the municipal council’s decisions at every turn, until the local government elections in May this year swept the mayor, Tefo Seikaneng, and his council away.

On November 9 the council overruled Sampson and resolved to stand by Pelatona-Ditiro Tsa Ka as the winning bidder.

Sampson then attempted to dismiss the senior managers she viewed as directly responsible for awarding the tender to Pelatona-Ditiro Tsa Ka, but again the council overruled her.

On December 6 Pelatona-Ditiro Tsa Ka invoiced the municipality, claiming R869 397.52 for work done on establishing sites for the project.

Three months later, on February 9, Pelatona-Ditiro Tsa Ka had not received its payment and threatened legal action. The municipality settled the bill within 10 days.

On March 3, however, Sampson laid criminal charges against the mayor, Tefo Seikaneng, and members of his council, on the grounds that the payment to Pelatona-Ditiro Tsa Ka had been fraudulent and corrupt.

On April 11, after the third in a series of letters from Sampson declaring she had terminated its contract with the municipality, Pelatona-Ditiro Tsa Ka’s lawyers informed the municipality of its intention to sue for R97.6-million for breach of contract.

The council acted against Sampson, suspending her on April 29, and resolving to negotiate a settlement with Pelatona-Ditiro Tsa Ka.

By then, however, ANC candidate lists circulated before the local government elections revealed the writing was on the wall politically for the Seikaneng-led council.

The incoming council, led by new mayor Esther Molete, assumed office on May 21.

However, the Seikaneng-led council had agreed to pay R2.5-million in damages to Pelatona-Ditiro Tsaka, plus legal costs of R166 000 to prevent being slapped with the
R97.6-million claim.

The settlement, concluded by court order on May 26, also confirmed Pelatona-Ditiro Tsa Ka as the contractor.

But the incoming council acted swiftly, voting to renege on the court settlement and lifting Sampson’s suspension.

On June 3 Khethwayo Construction signalled its intention to interdict the settlement between Pelatona and the municipality, arguing that it was an interested party and should have been included in any settlement.

Khethwayo Construction’s urgent interdict was heard in the North West High Court in Mafikeng last week, but was postponed to August.

He said, she said
As the tender dispute continues, sources sympathetic to Gopetse say that Sampson flouted the conditions of her maternity leave and unilaterally appointed Khethwayo Construction against the recommendation of the municipality’s tender adjudication committee.

The committee also noted that Khethwayo Construction had failed to complete two contracts it had received from the municipality previously and that, according to national treasury guidelines, it should therefore be disqualified.

However, sources sympathetic to Sampson claim that the basis on which the bid-adjudication committee disqualified Khethwayo Construction was flawed and that the haste with which Gopetse appointed Pelatona-Ditiro Tsa Ka was questionable.

Sampson, Gopetse and the municipality all failed to respond to requests for comment this week.

But Khethwayo Construction’s owner, Clement Khethwayo, told the M&G that he had submitted the lowest bid to the committee and should therefore have been awarded the tender.

He did not deny that his company had failed to deliver on two previous contracts, but said that it was “mischievous” to disqualify it for mistakes made more than five years previously.

Khethwayo referred the M&G to the bid-adjudication committee’s recommendation that “more information be acquired for the funding of the project before approval”. He said that this recommendation had been flouted with Gopetse’s award of the tender a few days later.

But former mayor Seikaneng told the M&G money was indeed available — R93-million of it — and that Pelatona-Ditiro Tsa Ka could therefore go ahead.

Conflicted consultant?
Questions have also been raised about the role of the project’s management consultant in the dispute.

The consultant typically advises the municipality about the scope of the project and once the tender is awarded the consultant monitors the performance of the contractor.

Seikaneng told the M&G this week that Cross Border owner Wandile Bozwana was a close friend and business partner of Khethwayo. “This is where our concerns of corruption and abuse came in,” the former mayor said.

Bozwana first came to the M&G‘s attention as the controversial winner of a medical waste-disposal tender in the province that is the subject of a yet-to-be-released forensic investigation by the auditor general.

Bozwana was also the ANC treasurer for the John Taolo Gatsewe district, which incorporates the Joe Mololo municipality, until April 2010. Barely a month later his company was appointed by the municipality to be joint management consultant to the piped-water project.

Bozwana urged the M&G to “evaluate the facts before it” and to ignore his past. “I am not an engineer; I am a businessman. My engineers recommended Khethwayo [Construction] to the bid committee, but, ultimately, it was up to them to make a decision”

Both he and Khethwayo admitted they were friends who grew up in the same township and had an on-off business relationship for years, but both denied that Khethwayo was a business front for Bozwana when it bid for the construction tender.

Khethwayo questioned Seikaneng’s motives in reaching a settlement with Pelatona-Ditiro Tsa Ka on the eve of the election: “You don’t just rush to do that unless you have an interest in the tender,” he said.

Seikaneng responded: “I am in business with the community — the business of bringing it service delivery. If we must settle for R2.5-million to save R97-million then we must settle.”

Although an ANC provincial task team has failed to find a solution to the dispute, a separate report by the provincial department of co-operative governance, human settlement and traditional affairs is ready, but has not yet been made public.

Meanwhile, the Hawks confirmed this week that their investigation into fraud and corruption regarding this tender was “at an advanced stage”.