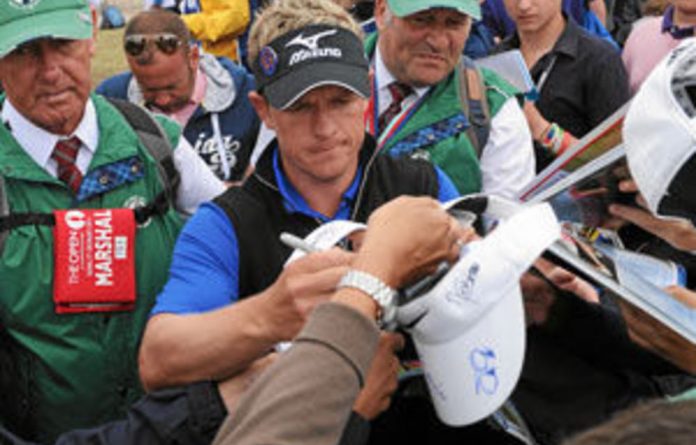 Luke Donald arrived at Royal St George’s as the first Englishman to compete in an Open championship as the world No. 1 since Nick Faldo in 1993. That is some achievement for a slightly built lad from High Wycombe but it will count for very little in the coming days, as the wider sporting public turns its gaze towards the Royal and Ancient club.

Donald might be top of the rankings and buoyant after victory at the Scottish Open at Castle Stuart on Sunday, but he will be decidedly bottom of the page unless or until he does something dramatic between now and Sunday, a bit-part player in what is destined to be the Rory McIlroy show. It is an unfortunate fate for a fine golfer but it seems this has been his lot thus far in his golfing career; a nearly man, even when he has earned the statistical right to be called the man.

“Winning Majors is a big deal for me and for the media and for the fans. With a 22-year-old winning a Major and winning it so successfully, it deserves the attention,” he said, insisting he is happy to take a back seat to the recently crowned US Open champion (and world No. 4).

“I’m not a flashy player. I get it done and sometimes I do it the hard way, but in the last three or four months no one has really performed better than me. But sometimes, when you win a Major like Rory did, in that fashion, it eclipses everything else.

“It doesn’t change what I’m doing. Obviously I still feel like I have a lot to achieve and I understand why some people would question whether I deserve to be the world No. 1 without having won a Major.”

So far, so sanguine. But when asked to endorse the view that professional golf has already made the transition from the “Tiger era” into the “Rory era”, his answer is nuanced enough to suggest he is not about to hand the Northern Irishman the Claret Jug quite yet.

“I think the first time that I played with him [McIlroy] at the Dunhill three or four years ago, when he needed to finish top four or five to make his card on the European Tour and he did that, I was very impressed then and kind of said that I felt like this kid was going to go a long way,” said Donald. “But let’s not forget, Rory has only won three tournaments as a professional. Obviously, one of them being a hugely impressive win, I think made him look like a much better player [than everyone else].”

What is left unsaid is that Donald, along with others, including Lee Westwood, do not believe McIlroy is a much better player than he is. They are right, although he will need to prove it by winning one of golf’s four biggest events.

This is easier said than done, of course, as Donald once again discovered at Congressional Country Club last month. Recently elevated to the top of the world rankings, he arrived in Washington, DC as one of the tournament favourites and, for 40 minutes, looked like the man to beat. He was grouped with Lee Westwood and Martin Kaymer (world No. 2 and No. 3 respectively), birdied his first two holes and then faded fast. He eventually finished 45th.

This week’s Major championship will be Donald’s second as No. 1. It is also his second Open at Royal St George’s. He played in 2003, the year Ben Curtis won, and missed the cut, as he did in every Open he played in until 2005. Still, he left Kent with the memory of an extraordinary opening round, which saw him paired alongside the then world No. 1, Tiger Woods.

“I was up-and-coming but had not really proved myself too much. I won a tournament at the end of 2002 in the States so they put me in with a pretty high-profile group,” he recalled. “One thing I remember is the strap broke on my bag at the 10th hole and my brother had to carry it like a suitcase. It wasn’t the greatest pairing to be a part of during that, but it was kind of a fun moment.”

Woods will be absent this week and, while McIlroy will garner most of the attention, from fans and media alike, Donald will tee off brimming with confidence. He has now won three times this year: at the world matchplay in Arizona, at Wentworth and, on Sunday, in Scotland. He has long been a great matchplay competitor but, finally, he has learned the art of winning strokeplay events.

“I am a much different player than I was back in 2003,” he said. “I’ve had eight years more experience dealing with tournaments, dealing with pressure, and knowing that even if I don’t have my best golf I’ve become a lot more patient. I think I would get very anxious and press too hard if I didn’t quite have my game and get frustrated easily. Now if I hit a few poor shots and make a couple of bogeys I don’t really get flustered. I know some birdies are coming; that I have to stay patient.”

‘He will make unbelievable amounts of cash’
Rory McIlroy, winner of June’s US Open and favourite for the Open Championship, is on course to become the United Kingdom’s wealthiest ever sportsman, according to the man charged with guiding the golfer’s career.

Andrew Chandler, who has been the Northern Irishman’s agent since McIlroy turned pro in 2007, described as extraordinary the reaction to his client’s eight-shot victory — both from the wider public and from the corporate world, as potential sponsors seek to tie their name to McIlroy’s image.

“Why do you keep going on about money? It’s not about the money, it’s about the career. If Rory’s career goes well then the money will be there. I can’t tell what will happen in the next 20 years — it depends on how many cars he buys or how many houses he has — but he will make unbelievable amounts of cash.”

There have been reports that McIlroy’s fortune could one day surpass that of Tiger Woods, who was reported in 2009 to have become the world’s first billionaire athlete. Chandler was at pains to quash comparisons with the American — “Rory is not the ‘new Tiger Woods’, he is Rory McIlroy” — and said he doubted the former world No. 1 had accumulated a billion-dollar fortune. But he conceded McIlroy’s earning power had increased exponentially within the space of a month.

“What I will say is that when he comes to sign new deals Rory won’t be a million miles away from what Tiger gets, based on the amount of reaction we have had after the US Open and what people want and what they are offering,” he said. “With Rory, there are no rules any more. I have no idea what he is worth because there is no set value on what he does. You follow some guidelines based on other guys but he has gone … sky high.”

If McIlroy performs as many expect — he is the bookies’ favourite to lift the Claret Jug on Sunday — Chandler will face the happy dilemma of finding a new description for the 22-year-old’s earning potential. After all, what is higher than the sky? —