Promises, but still not time to celebrate 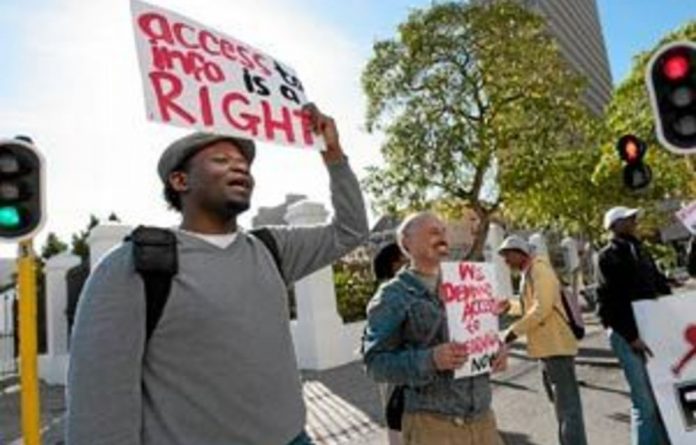 The concessions the ANC made last month on the Protection of Information Bill — the "Secrecy Bill" — hold sweet promise for the deepening of democracy, but the party is digging in its heels on the most important of all issues: the public-interest defence.

A huge battle looms between government and civil society over the lack of a public-interest defence and the overly broad definition of "national security".

The ministry of state security has been adamant since the ad hoc committee announced the concessions on June 24 that there would be no public-interest defence because it finds this concept "too wide". It argues, also, but mistakenly, that there is no international precedent.

The new deadline for the Bill is September 23 and the ad hoc committee meets again on July 25.

Meanwhile, the Right2Know (R2K) campaign will ratchet up the pressure in a series of mass actions in Cape Town and Johannesburg: next week on Tuesday in Khayelitsha the Reverend Xola Skosana, Neliswa Nkwali (Treatment Action Campaign), Lukhanyo Mangona (Equal Education), Wanda Bici (Social Justice Coalition) and Nkwame Cedile (R2K) will address a mass meeting titled: "We Demand Delivery Not Secrets". Next month in Johannesburg there are plans for a mass rally and a march to the Constitutional Court.

The recalcitrance of the state security ministry can be seen in recent responses from the department's adviser, Dennis Dlomo, and spokesperson Brian Dube. Dube said in an email that the ministry would not consider a public-interest defence: "No. The ministry has conceded that there is a need to strengthen whistle-blower protections in the Bill. This has been done. On the issue of a public-interest defence, we found the concept to be too wide. No one has defined what is meant by this public interest. Which public? Whose interest?"

Dlomo, in a Radio 702 round-table discussion this week, was adamant that the most important issue to "demystify" was that "classification did not mean no access". But he could not answer properly when questioned about it being a criminal offence to be in possession of a classified document.

What Dlomo and other promoters of the Bill could not understand was why people could not just "follow processes" and get access to information via the Promotion of Access to Information Act (Paia). They also have no answer to the question about why the process to access information through Paia takes so much time and is so cumbersome.

The lack of a public-interest defence means that government institutions will be able to operate without public scrutiny. It will stop the media exposing corruption and abuse of power.

So far the concessions made after enormous public pressure — opposition from more than 20 000 individuals and 400 nongovernmental organisations, the Congress of Trade Unions (Cosatu) and the Federation of Unions of South Africa (Fedusa), 50 000 signatures collected worldwide by pressure group Avaaz, marches and protests outside Parliament — have been significant.

Second, the committee announced that it would remove the minimum sentences for those who leak classified information.

Third, there has been acceptance of independent oversight and a retired judge will be appointed to review classification.

But the biggest caution to all should be that there is nothing in writing yet. There is no newly drafted Bill, but it's likely that the amendments will be tabled on July 25 at the next meeting of the ad hoc committee.

Sithembile Mbete of the Institute for Democracy in Africa (Idasa) and R2K cautioned that, even though concessions were made, there is indeed no new draft of the Bill at the moment. She pointed out that the concessions were made in principle and there were no instructions given to the state law adviser to implement the changes in the Bill.

According to the ad hoc committee, the concessions will be discussed in detail when it meets again. Then the state law adviser will be given instructions to amend the Bill accordingly. The same procedure will be used to amend other clauses in the Bill.

Meanwhile, two of the most important issues are not addressed in the concessions: the lack of a public-interest defence and the narrowing of the definition of national security.

Clearly there is cause for some celebration and partial victory must be claimed, but some critical battles have not been won. The dialogue, robust debate and exchanges, as well as protests, marches and petitions must continue, to narrow the definition of 'national interest” and for a public-interest defence.

Glenda Daniels is advocacy co-ordinator at the M&G Centre for Investigative Journalism (amaBhungane) and is on the Right2Know national working group.

‘Boris the Baby Bot’: The little book about big data