Shot in the arm for ailing US economy 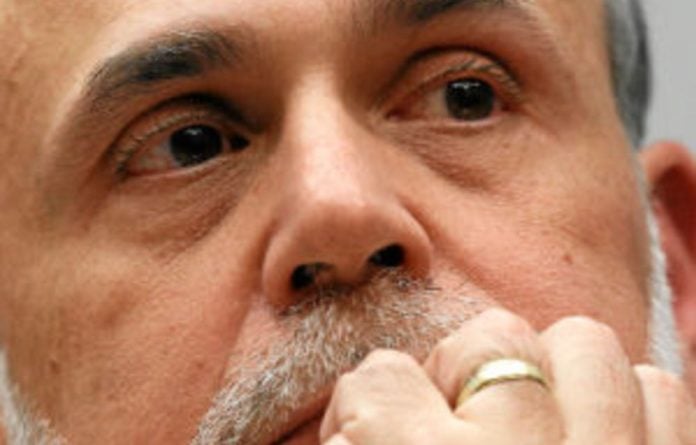 Ben Bernanke, the United States Federal Reserve chairman, is poised to inject further funds into the US economy and commit it to several years of low interest rates to combat flagging growth and prevent further rises in unemployment.

Bernanke said a third round of quantitative easing, called QE3, could be necessary if the economy fails to regain momentum in the second half of the year.

Stock markets jumped as investors cheered the prospect of increased support from the Fed, with the Dow Jones industrial average increasing 150 points, or 1.2%, in morning trading. The FTSE 100 closed up 37 points, at 5 906.

Bernanke said the Fed could launch another round of treasury bond-buying before the end of the year. The Fed could also cut the interest it pays to banks on reserves held by the central bank, as a way to encourage them to lend more.

The Fed could also be more explicit about how long it planned to keep rates at a record low, which would give investors confidence in its efforts to continue supporting the economy.

Bernanke’s warning came as Republican and Democrat politicians continued to wrangle over a package of measures to cut the government deficit and stimulate the economy.

Republicans have favoured plans to curb spending and cut taxes, while Democrats have emphasised the need to maintain spending to boost the economy.

Republicans, many of them Tea Party representatives, have attacked the Fed’s programme of quantitative easing as a chief cause of high inflation following a sharp rise in commodity prices.

Delivering his twice-yearly report to Congress, Bernanke said the central bank was prepared to provide additional stimulus if the US economic slump persisted.

He said temporary factors, such as high food and petrol prices, had slowed the economy. These factors should ease in the second half of the year and growth should pick up.
But if that forecast proved wrong, he said, the Fed was prepared to do more.

“The possibility remains that the recent economic weakness may prove more persistent than expected and that deflationary risks might re-emerge, implying a need for additional policy support,” Bernanke told the House financial services committee, on the first of two days of testimony.

However, in answer to critics of his policies, Bernanke conceded that inflationary pressures on energy and food might end up being more persistent than the Fed anticipated. He said the central bank would be prepared to start raising interest rates faster than currently contemplated if prices did not moderate.

The Fed has kept its key interest rate at almost zero since December 2008. Most City of London economists believe it will not start raising it until mid-2012 and some believe rates will not be raised until 2013.

Further tapering of monetary stimulus, announced by the US Federal Reserve, has seen the dollar climb while other currencies feel the pressure.
Read more
World

Ben Bernanke could still cause an economic crash

Part of the US Federal Reserve chair's legacy is a country in recovery, but it's not yet back to banking business as usual as Bernanke steps down.
Read more
Business

Reserve Bank governor Gill Marcus believes that while adjustments to tapering will be trying, it is ultimately good news.
Read more
Business