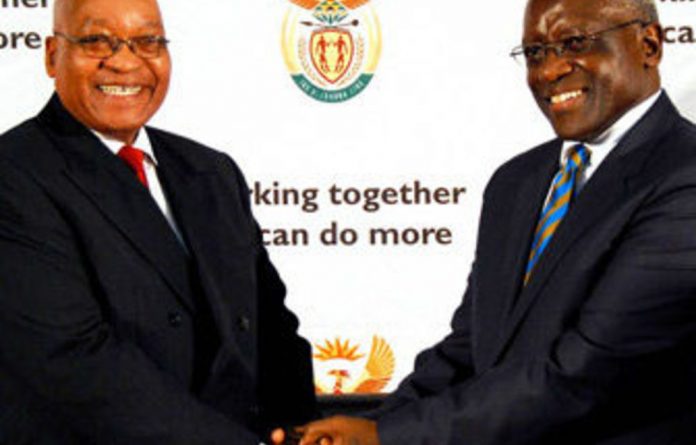 The Constitutional Court will have to decide whether the president’s extension of their boss Chief Justice Sandile Ngcobo’s tenure is valid or not, following argument at the court in Johannesburg on Monday.

Ngcobo himself chose not to be present and did not brief counsel either, choosing rather to accept what the court decided.

Seven lawyers tackled what one of the justices, Johan van der Westhuizen, said could have ramifications for decades.

Earlier this year, President Jacob Zuma was advised by the minister of justice that Ngcobo’s seven-year term of office as a judge would end at midnight on August 14 this year, and he would have to leave his position.

His options were to extend Ngcobo’s term, or appoint another chief justice.

Zuma wrote to Ngcobo and asked him to stay on for another five years, and on June 2 Ngcobo agreed.

Zuma informed political parties and the Judicial Services Commission, which interviews judges for vacancies and then refers their candidate choices to Zuma for the final say.

However, although the applicants pointed out that they were not questioning Ngcobo’s integrity or skills, they believe that in terms of the Constitution, it should have been done through an act of Parliament and that the way Zuma did it was unconstitutional.

“The debate before the court does not relate to the competence or otherwise of the chief justice or his skills and abilities,” said advocate Vincent Maleka, submitting argument for the Council for the Advancement of the South African Constitution (Casac).

Casac, Freedom Under Law, Justice Alliance of South Africa and the Centre for Applied Legal Studies contend that Section 8(a) of the Judges Remuneration and Conditions of Employment Act 47 of 2001 is inconsistent with Section 176(1) of the Constitution because the Constitution provides for the extension by an act of Parliament.

They believe the delegation of power by Parliament to the president is too wide, with no guidelines on possible abuse of power, that 176(1), that the Constitution places an obligation to consult with the JSC and political parties before making an extension, and that there is no Section 176(1) precludes the extension of the term of office of a particular Constitutional Court judge.

Kemp J Kemp, representing the president, submitted that the president has the discretion to make the extension and perceptions that he would favour or disfavour an individual were “totally unrealistic”.

Kemp also rejected a suggestion earlier by Judge Johan van der Westhuizen that judges looking for an extension, or not, would work differently depending on whether they wanted to stay on or not.

Advocate Marumo Moerane, for the minister of justice said: “I think it is important for everybody to know whether this section is unconstitutional and whether to take remedial action.”

He pointed out that a pending amendment to the “judges Act” would expunge 8(a) in its current form.

The amendment, if passed, stipulates that a judge can stay in his or her position for 12 years, or until they are 75 years old, whichever comes first.
Public hearings on the Bill are supposed to take place at the end of July.

The National Association of Democratic Lawyers believe that if the provision used was unconstitutional, the court should suspend the invalidity and offer Parliament a chance to fix the defect.

The lawyers hoped that judgment would be handed down before August 15. — Sapa