Too early to write off Rupert Murdoch as CEO? 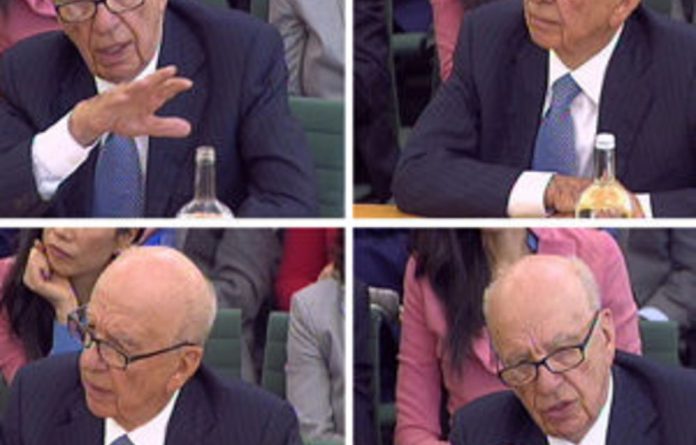 It looked like it was time for a changing of the guard at News Corp.

Rupert Murdoch appeared tired, close to the end of a remarkable corporate career. His son James came across as fresh, smart and eloquent, ready to deal with arguably the worst crisis at the global media empire.

But Murdoch senior (80) made clear he wasn’t ready to go yet.

“No,” Murdoch firmly told a British parliamentary hearing on Tuesday, when asked if he would resign over the phone-hacking scandal that has rocked News Corp.

“I feel that people I trusted, I’m not saying who, I don’t know on what level, have let me down and I think they behaved disgracefully, betrayed the company and me, and it’s for them to pay.”

He went on: “I’m the best person to clean this up.”

The problem Rupert Murdoch faces is that his presumed heir is not in a position to take over. James Murdoch (38) initially failed to deal adequately with the phone-hacking scandal at the company’s News of the World tabloid, and he could be further implicated as police investigations pick up.

“I would have thought that after last night, that has accelerated the pace of change, rather than slowed it down,” said Bruce Guthrie, former editor of Murdoch’s Herald-Sun newspaper in Melbourne, Australia, between 2007-2008.

“I think the market will probably be looking in the short term for a non-Murdoch to take the reins, and then perhaps a Murdoch will take control again in the future,” he told Australian radio. Guthrie won an unfair dismissal case against the company in 2008 and wrote a book called Man bites Murdoch.

News Corp’s board does not seem ready to strip Murdoch senior of the chief executive title — leaving him just the chairmanship — even though chief operating officer Chase Carey is widely seen as a capable CEO replacement.

Independent directors Viet Dinh and Tom Perkins have now publicly stated that the News Corp board is united in support of the senior management team.

“In no uncertain terms, the board and management team are singularly aligned,” Dinh said in a statement on behalf of independent directors of News Corp after the hearing.

Even investors who criticised Murdoch’s performance at the hearing felt it was too soon to write him off.

Murdoch called it the most humble day of his life and often looked ill at ease, rarely showing the passion and aggression on which he built his business over six decades.

He answered many questions in monosyllables and left long pauses before giving short replies. When Murdoch stumbled over answers, his son frequently tried to step in, only to be told he must let his father answer the question.

At one point, Murdoch senior admitted to being out of touch with the ins and outs of News International, the UK newspaper arm at the center of the scandal.

But he said Rupert didn’t look like he was about to quit.

“Rupert is News Corp, so I do not see him stepping down any time soon,” said Wirtz.

‘James did a sensational job’
Until the phone hacking scandal exploded on July 4, James Murdoch had been expected to eventually take over from his father. But the younger Murdoch has been tainted by details that emerged on his handling of the aftermath, such as the paying off of some victims.

In the past fortnight, News Corp has lost $8-billion in market value, closed its oldest British tabloid, and lost out on its biggest ever proposed deal, BSkyB.

News Corp’s stock ended up 5.5% on Tuesday, with Wall Street analysts pointing to a relief rally that the hearing did not uncover anything too damaging.

“I think the hurricanes have passed with this performance, they both did a great job. I personally believe management stability is a key thing for media properties.”

A long-time shareholder in Australia said the Murdochs’ appearance had cleared up uncertainty over how far up the chain responsibility rested in the hacking scandal, but he remained concerned about the potential fallout.

“I certainly wouldn’t look at this issue and say that that has any bearing on whether [Rupert] Murdoch should be there or not,” said Angus Gluskie, portfolio manager at White Funds Management.

“It’s a remarkably difficult situation, and I wouldn’t be too harsh in judging how they’ve handled it.”

A top 10 News Corp shareholder said he felt the senior Murdoch’s performance was poor and called it “a big black eye”, adding that appointing Carey as CEO would be “a good cosmetic move”.

But he noted that would be a big snub to James Murdoch, and a message his father was not prepared to send. The shareholder spoke on condition of anonymity.

If the heir apparent baton passed to another Murdoch, former editor Guthrie said daughter Elisabeth would be the most likely. News Corp recently bought her TV production company and she is expected to join News Corp’s board.

“I would have thought Elisabeth is a better chance. Elisabeth is not as tainted as some of the other kids. She has proven herself as a businesswoman in her own right,” he said.

“She is a longer-term proposition, if there is to be an interim period where Murdoch cedes control to someone else, an outsider, with the view of bringing one of the family back in again at a later stage.”

Murdoch appeared to recover his spirits in the second half of the proceedings, answering questions more forcefully. He also got something of a sympathy vote from some observers after a surprise attack by a man with a plate of white foam.

“It made me think he’s an old man, very frail, at the end of a long career,” said Jennifer McDermott, media lawyer and partner at Withers Worldwide. – Reuters