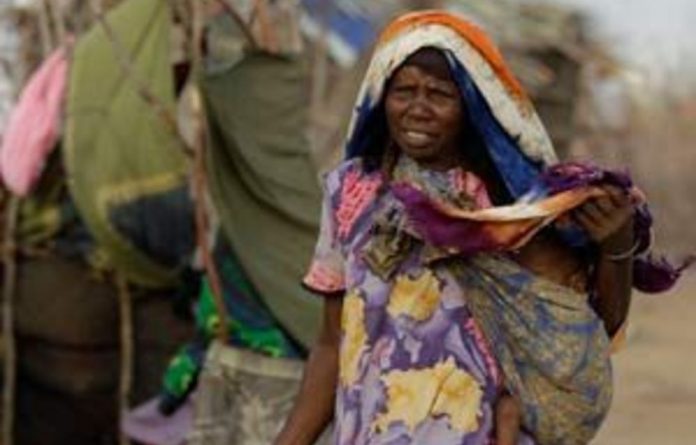 The United Nations World Food Programme was set on Tuesday to start airlifting food to Somalia, Ethiopia and Kenya after an emergency meeting in Rome on the drought-stricken Horn of Africa region.

An estimated 3.7-million people in Somalia — around a third of the population — are on the brink of starvation and millions more in Djibouti, Ethiopia, Kenya and Uganda have been struck by the worst drought in the region in 60 years.

WFP chief Josette Sheeran said her organisation would begin food airlifts to the Somali capital Mogadishu, as well as aid flights to Dolo in Ethiopia on the border with Somalia and to Wajir in northern Kenya, which has been badly hit by drought.

The plight of children in Somalia is “the worst I have ever seen,” she said, after visiting Mogadishu and the Dadaab refugee camp in Kenya over the weekend.

“What we saw is children who are arriving so weak that many of them are in stage four malnutrition and have little chance — less than 40% chance — of making it,” Sheeran said.

“It is imperative to stop the famine,” declared by the UN this month in two insurgent-held areas of southern Somalia, Diouf said.
Officials said at Monday’s meeting the UN has received about $1-billion since first launching an appeal for the region in November 2010 but needs a billion more by the end of the year to cope with the emergency.

The World Bank on Monday pledged more than $500-million, with the bulk of the money set to go towards long-term projects to aid livestock farmers while $12-million would be for immediate assistance to those worst hit by the crisis.

But charities voiced disappointment at the international response.

“It is shameful that only a few of the richest and powerful economies were willing to demonstrate today their commitment to saving the lives of many of the poorest and most vulnerable,” said Barbara Stocking, the head of Oxfam.

U2 band frontman and anti-poverty campaigner Bono’s charity ONE said: “The political will manifested in Rome should be followed by action.”

French Agriculture Minister Bruno Le Maire called for the creation of a rapid reaction unit within the FAO to respond to food crises, more research into drought-resilient crops and a crackdown on high food prices.

“If we don’t take the necessary measures, famine will be the scandal of this century,” Le Maire said. He also berated the international community for having “failed” to ensure food security in a world affected by climate change.

Le Maire said the issue would be discussed at “the donor conference in Nairobi in two days’ time.” A spokesperson for the FAO later specified this was not a pledging conference but a regular meeting to which donors had been invited.

UN officials say the drought has killed tens of thousands of people in recent months, forcing hundreds of thousands of desperate survivors from the worst-affected areas of Somalia to walk for weeks in search of food and water.

The key challenge for aid groups has been reaching parts of southern Somalia held by the al-Qaeda-inspired Islamist militia group Shebab, which has banned WFP and other international humanitarian agencies from operating on its territory.

The 82-year-old has warned victims to lower their expectations, saying that much of the work on tackling abuse would be done post-summit
Read more
Advertising