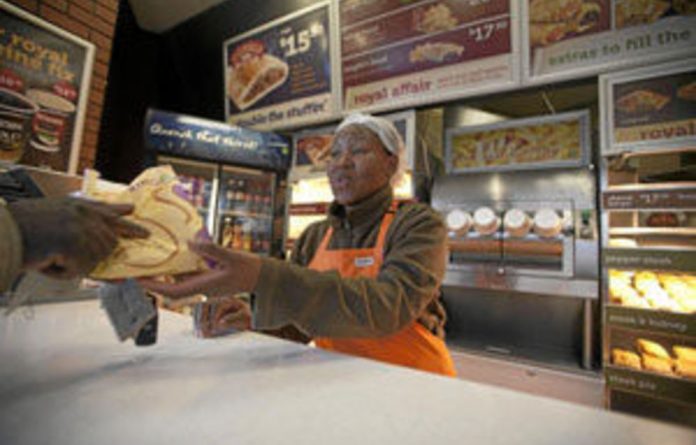 Big businesses, trying to access untapped markets and under pressure because of the global economic crisis, are moving into the townships and selling franchises to locals who sometimes do not have the experience to operate them.

Without adequate support, many are doomed to fail. Many of these franchisees say they feel they have been set up to fail by companies that refuse to provide the support necessary for retailers operating in the often unique conditions of the townships.

Entrepreneurs need to plough large amounts of money into these businesses and franchising also means conforming to uniformity, which can be costly. Some also have other problems, such as the location of their businesses.

Tashmia Ismail, Base of the Pyramid hub manager at the Gordon Institute of Business, said that, because of the recession and the saturation of products in established markets, corporations were looking for growth in new, dynamic areas. This had driven a move into township markets.

He said there was an urgent need for financial institutions to change their mindset about the business potential in these areas. The township market is robust if you get it right and if your business adds real value and meets a real need, he said.

But business people in lower-income areas often found it difficult to access capital and insurance.
“They [banks] battle with perceptions of what business is like in the townships. But the amount of growth they could anticipate would shock them,” said Ismail.

Vera Valasis, the executive director of the Franchise Association of South Africa (Fasa), said that, historically, franchisers tended to shirk their responsibility once they sold a franchise. The buyer, usually a business person, had to start up a branch and was left to deal with it on his own.

But that was not necessarily the case now. “Up-and-coming black business people require support from franchises. Some franchises realise that, some don’t — and that’s when the wheels come off.”

Valasis said that franchisers had to be careful when selling to people without any business experience because, without support, they were likely to fail. “They have a very real responsibility to make sure that people make money out of the franchise they have bought.”

“The problem is the non-members, young developing companies or those who don’t want to disclose information about their business models,” Valasis said.

Peter Moyanga, a franchise consultant to the African Development Bank and a McDonald’s franchisee, said franchises had down well in the townships, but a franchise involved an ongoing relationship between a franchiser and a franchisee. Anyone considering buying a franchise should be wary of investing in chains that do not foster a supportive relationship, he said.

Valasis said that she firmly believed that the Consumer Protection Act would put an end to these issues. “Now, if you don’t get support, you can take it further,” she said.

President Jacob Zuma’s plan to achieve five million new jobs by 2020 had overlooked the part that franchising could play in the success of this, Valasis said. The association urged the state to recognise the important role franchising had played in fostering entrepreneurship, transferring skills and creating jobs.

Fasa noted that 68% of private-sector employment was provided by small businesses with less than 50 employees. It said that this “vital area of business” should be included in the government’s forward planning and given more support.

Some of the first stores were opened in townships, where the numbers have grown enormously in recent years. Today there are many King Pie branches in most of the major townships.

“Developments in townships and rural informal settlements certainly seem to be the flavour of the moment. With the increase in new developments in these areas, there has also been a corresponding increase in the number of King Pie stores,” said King Pie chief executive Wynand Pretorius. “The emergence of a black middle class has further assisted in the growth of our store footprint in township areas.”

He said that King Pie had developed several solutions to meet the demands of townships, including full brick-and-mortar outlets, kiosks and even free-standing units that could be set up anywhere where there was water and electricity. “The success rates of township stores have been fairly similar to the success rates of stores in other areas,” Pretorius said. “Some of our best-performing King Pie stores are in townships.”

He said that there was a particular trading pattern in many township stores. Because residents largely worked in other areas, “we tend to see a higher than normal percentage of trade in these stores over month-ends and weekends and also at slightly different times of the day during the week”, Pretorius said.

Also many of the franchisees in townships were new entrants to the industry and did not have much experience. “It is imperative for the franchiser to provide sufficient, upfront training to these franchisees and to be closely involved with the initial day-to-day running of these stores.”

King Pie, Pretorius said, had extensive support structures in place to help franchisees. “Our training department provides ongoing in-store training to all franchisees and their staff free of charge.

“Struggling franchisees are evaluated on a case-by-case basis and the franchiser support is tailored to provide each franchisee with a plan,” he said.