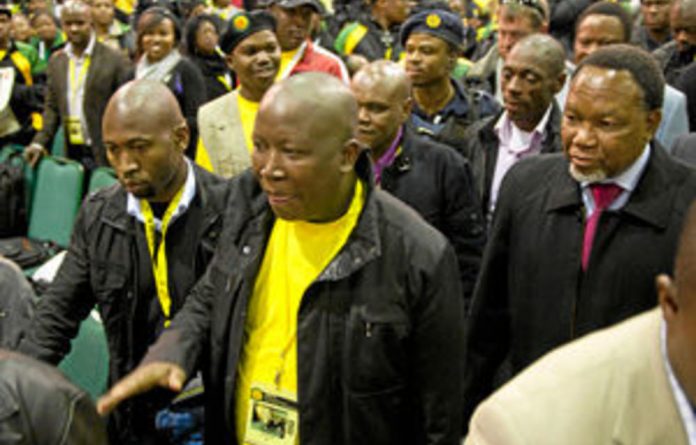 Most ANC provinces would like the party’s leadership succession debate to be opened immediately despite its national executive committee’s (NEC) decision to ban all discussion of the matter for now.

Four provinces have come out in support of a call by the ANC Youth League and the ANC in Gauteng for open debate to be allowed. The North West, Limpopo, Mpumalanga and the Free State all said they would prefer their members to talk openly about anyone they might like to challenge Jacob Zuma’s leadership at the party’s elective conference in Mangaung in the Free State next year. This is likely to make it difficult for the ANC to keep a lid on the leadership race.

At its national congress last month, the youth league resolved that the ANC should allow open debates on who could be elected. The Gauteng provincial general council followed suit.

The ANC fears that leadership discussions will divide the party in the middle of Zuma’s term of office and so banned them, as it did in the run-up to the Polokwane conference in 2009 during former ANC president Thabo Mbeki’s final term.

The North West and the Free State will ask the NEC to put the matter back on the table at next month’s meeting.

The North West provincial secretary, Kabelo Mataboge, said that, although the province supported the NEC’s decision “for now”, its leadership was not happy with this. Mataboge said the committee was wrong to stop ANC members from discussing the leadership they wanted.

“The NEC cannot decide when structures should start this debate. It’s up to the structures themselves,” he said. “This is tantamount to the suppression of the people’s views. You cannot tell people what to discuss, [and] when.”

He likened the decision to that of the Mbeki-led NEC, which also tried unsuccessfully to manage the leadership debate as soon as it became clear that Mbeki was planning to stand for a third term in office. “Mbeki tried to do that and it didn’t work. It created a lot of problems in the ANC that divided the party pre-Polokwane,” said Mataboge.

Leadership assessment
Free State provincial secretary Sibongile Besani said his province took a decision to push for an open debate because “the assessment of leadership should take place every now and then”.

“We will approach the NEC in the next meeting to accept our proposal,” Besani said. “In our view leadership is assessed day in, day out. It means we can improve on weaknesses and strengthen the leadership.”

“You cannot ban people from expressing their views. Already people are talking. The reason Gauteng says we should open the debate is because people are already debating informally. People everywhere are talking about it [so] the question of whether to open the succession is neither here nor there,” said Mathale.

Mpumalanga supported the opening of the debate because it was “inevitable”, according to its secretary, Lucky Ndinisa.

“As to when this should happen is immaterial. At some point we will have to debate it. People need to say what kind of an organisation they want,” said Ndinisa.

He said denying people space to discuss the leadership succession was like blindfolding them until the time of the conference.

“It is important for us to have a programme now and say who are the suitable individuals who should take it forward.”

But the ANC in KwaZulu-Natal and the Eastern, Western and the Northern Cape reacted cautiously to the call this week and said they would abide by the NEC’s decision to wait until next year.

Relevance
Eastern Cape provincial secretary Oscar Mabuyane said they would have a solid position after the provincial executive committee meeting next week.

“There is currently an NEC decision that the matter is not yet relevant. When the NEC has taken a decision, there’s no need for a panic in the lower structures, unless they don’t have confidence in the NEC,” he said.

Mabuyane said that, once the debate was open, the Eastern Cape would like the senior leadership of the ANC to give it space for a full and frank discussion.

“We will not be limiting ourselves to warm bodies. The debate should look at the Polokwane resolutions, the ANC’s programme of action and what has been achieved. We want to discuss the leadership collective, not this leader and that one.”

Songezo Mjongile, the Western Cape provincial secretary, said: “We are really focusing on strengthening our opposition strategy and that is our key focus.”

KwaZulu-Natal was also waiting to discuss the matter at an “appropriate time”, said its secretary, Sihle Zikalala, and would abide by the NEC decision.

Northern Cape secretary Zamani Saul said his province adhered to the long-held view that issues of succession “don’t really get discussed far away from conference”.

“We don’t do that. You can’t get the entire organisation mired in issues of leadership. We are not obsessed with leadership.

“We have just come out of local elections so we should be worrying about improving lives and ­implementing the manifesto.

“Issues of succession are unnecessary, premature and might lead to tensions that cause divisions.”

ANC secretary general Gwede Mantashe recently said that opening the succession debate could “lead to chaos”. It would be suitable for the debate to be opened in January next year after the party’s centenary ­celebrations, he said.

But some provincial leaders believe that Zuma himself paved the way for the succession debate to be opened when he spoke to the media about the matter last week.

The ANC’s succession race was “not a battle” for the party’s soul, he said at the launch of the party’s centenary celebrations at Constitution Hill. “It [the ANC] will not be a living organisation, it will be artificial if we had no diverse views on matters as well as on preferences in terms of who leads,” he said.

“It’s only in the ANC where the leaders can talk about the leadership while there is an incumbent. You don’t do that in other organisations. But in the ANC you can, because we are all democrats.”

A provincial leader who did not want to be identified because he was not mandated to speak for the party said: “The president wittingly or unwittingly was opening the discussion. And when he was interviewed on succession, he didn’t say we have not opened the discussion, he said it was a democratic step.

“You cannot celebrate the centenary without talking about the leadership.

“The centenary imposes an opportunity on the ANC to adopt a different posture from the one it’s been holding all along.”

The majority of the more than 100 people killed in the province have been ANC members, but now witnesses, and even cops, appear to be on hit lists
Read more
Politics

KZN ANCYL leader gunned down outside his home

Dumisani Moyo was taken to a local clinic where he died. A murder investigation docket has been opened and police are investigating the incident
Read more
Politics

ANCYL vows to go after anyone in plot against Ramaphosa

Maine warned that the league would defend Ramaphosa from anyone, including leaders within the organisation
Read more
Advertising