Power and patronage in Pondoland 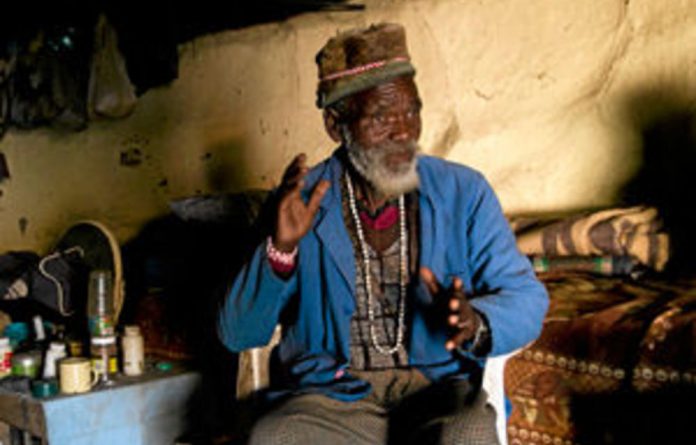 The only thing that moves with any speed on top of Kananda Hill near Bizana in rural Pondoland is the wind.

For the rest, it is the slumbering pace of going nowhere in no particular hurry. On the hilltop, 52-year-old Sipho Shusha spends his days driving cows away from a nearby gravesite by shooting stones at them with his home-made catapult.

The gravesite is of significance and requires the caretaker’s catty. The bodies of 10 traditional leaders who were executed in Pretoria for their part in the Pondo Rebellion between 1960 and 1962 were exhumed and buried here in 2007.

“The people sleeping here are great people for us. We still talk about their uprising against the government [because they opposed the Bantu Authorities Act] and they used to meet over there,” says Shusha, pointing to an adjacent hill.

The dead were part of the mountain committee which, in his book The Peasants’ Revolt, Govan Mbeki noted “rallied the majority of the tribesmen in their Bizana district into open struggle against the authorities and their henchmen” with meetings “attended by thousands of peasants, who came on foot and on horseback to chosen spots on the mountains and ridges”.

With, as Shusha points out, “the king [Botha Sigcau, the father of ‘deposed’ paramount chief Mpondombini Sigcau] on the side of the government and getting these people killed” the mountain committee appears to be one of the first recorded coalescence of popular democracy and traditionalism for the Pondo.

As Mbeki noted: “The Pondos have been well known in South African history for their allegiance to authority.”

Cultural heritage: The graves of traditional leaders who took part in the Pondo Rebellion.

It is that allegiance to authority — or rather the authority to whom allegiance is owed — that will soon be tested in South Africa’s courts. Erstwhile paramount chief Mpondombini Sigcau has taken President Jacob Zuma, with various other government departments including local government and traditional affairs, to court over the findings of the Commission on Traditional Leadership Claims and Disputes. The matter is due in court in coming weeks.

The rightful leader
In July last year the commission (popularly known as the Nhlapo Commission after its first chairperson, Thandabantu Nhlapo, who was appointed by former president Thabo Mbeki in 2003) found that Zanuzuko Sicgau, rather than Mpondombini, was the rightful leader of the Pondo. The finding was confirmed by Zuma, leading to Zanuzuko’s inauguration as king in April this year at a ceremony held at the Mzindlovu Great Place.

The succession debate dates back to the 1930s following the death of the paramount chief, Mandlonke Sigcau. With no successor from the Great House (the first wife’s house), Mpondombini Sigcau’s father, Botha, was installed as chief by a commission set up by then governor general Patrick Duncan.

The Nhlapo Commission found that Duncan’s intervention meant Botha “was a creature of the statute and that in appointing him, the customary law and customs of the AmaPondo had not been followed”.

They found in favour of Zanuzuko Sigcau, who is the grandson of Nelson Sigcau, who was from one of the lower houses of the Pondo royal house. However, some factions within the Pondo royal house apparently favoured Nelson over Botha, who, even today, Pondo elders associate with collusion with the repressive state. Nelson Sigcau married his dead brother, Mandlonke’s great wife, Magingqi, through the custom of ukungena (to enter and take over). From the relationship came a son, Zwelidumile, the father of the newly recognised Zanuzuko Sigcau.

Whether the ukungena was performed according to proper custom is being questioned in Mpondombini Sigcau’s court application. He is also asserting that the commission failed to comply with various sections of the Provision of Administrative Justice Act, especially regarding procedure and consultation with the Pondo royal house and questions the president’s constitutional right to remove or replace kings.

Mpondombini Sigcau suggests Zuma’s confirmation of a new leader of the amaPondo amounted to his being “deposed” and asserts that the president acted unconstitutionally as Section 211 of the Constitution “only empowers the Royal Family or a structure formed according to custom to decide on how a new king or queen can be removed”.

There has been criticism of the Nhlapo Commission’s methodology. Academics like Pearl Sithole, who, in 2008, published the Fifteen Year Review on Traditional Leadership in 2008, told the Mail & Guardian that her impression was that the commission “lacked rigour in its research” and that apart from holding hearings more focus should have been placed on accessing archives and academic material and consulting a broader range of experts.

From ignorance to support
Opinion in Pondoland itself ranges from ignorance of the matter to support for the new paramount chief to conspiracy theories about the deposition of the old paramount chief. Nobomi Madikizela, a 31-year-old female junior chief in the Ndlovu area, said of Zanuzuko, the new paramount chief: “The royal house should decide, but the royal house seems divided. The president anointed him as the king, the department of traditional affairs notified us that he is the king, so we recognise him as the king.”

Chief Zamakhile Langasiki was even more adamant that Zanuzuko was the rightful leader of the Pondo people: “If a brother takes the wife of his brother, then that child is the child of his brother according to Pondo custom,” he said of the disputed ukungena ritual.

Yet custom, tradition and interpretation are never rigid. The inextricable link to memory, sometimes as dilapidated as Shusha’s graveyard, poses other problems too.

Nomfundiso Madikizela (71) lives about 20km from the R61 between Bizana and Port Edward. When there is no rain it takes more than an hour to get from her home to the main road, the rocky paths used for cars are so bad: “Sometimes we get a bit of information, but not much. Everything happens far away over there,” she says, flapping her hands in the direction of the road.

“I know there have been problems about the king, but I don’t know too much.” Pressed on the ukungena issue, she was unsure of what actual amaPondo custom dictates.

Samson Gampe (89), however, appears to have the memory of an elephant. He becomes animated when his mind goes back to the Pondo uprising, shaking an imaginary mkhonto (spear) and vividly describing the calls to arms during that period.

Gampe, who lives on the Xolobeni Wild Coast, is also the veteran of a more recent struggle: the Xolobeni community’s resistance to dune mining in the area. The department of mineral resources recently revoked a mining licence granted to Australian company Transworld Energy and Minerals and its black economic empowerment partner, Xolobeni Empowerment Company, following long resistance to mining in the area. The mining companies still have about a month to appeal or reapply for the licence, but Gampe said “even if I die, I will return from the dead to fight the mining”.

For Gampe, and others in his community, government’s replacement of paramount chief Mpondombini with Zanuzuko smacks of political manipulation: “The king was very much against the mining. That is why he was replaced. They want somebody who is in favour of the mining so that the government people will get rich while our children suffer here because of it,” he said.

The Sigidi community, which opposes the mining at Xolobeni, suggests that its own leader, Lunga Baleni, has had his chieftainship threatened by other claimants because he is against the mining.

Baleni confirmed that there were two claims to his position but is convinced that he is the rightful leader in the area. Chieftaincy disputes are happening all over Pondoland, residents said.

Amadiba Crisis Committee activist Mzamo Dlamini said it seemed to be “growing practice” for government to use traditional leadership disputes to put in place people who were malleable, some of whom couldn’t read and would rubberstamp whatever projects it wanted to get off the ground. “I am fearful that the mining issue has not gone away yet,” he said.

“We are not against development, we are against people enriching themselves at our cost. Already you see that those who were in favour of the mining have taken up positions in the [Bizana] municipality, giving jobs to their friends and families so they can say: ‘See, if you support us, if you support the mining, we will take care of you.’ This is not democracy.”

From one commission to another, from Mbeki’s 1964 observations on how the apartheid regime propped itself up by cultivating systems of patronage in rural Pondoland to today’s allegations of the same, history, it seems, is on repeat.