We have a deal: US House passes debt Bill 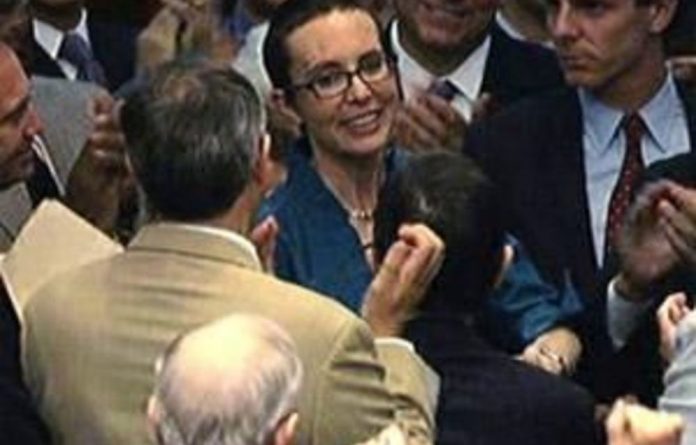 A last-gasp deal to raise the US borrowing limit cleared its biggest hurdle in Congress on Monday, warding off the risk of a debt default after weeks of partisan feuding that damaged America’s image abroad.

A day before the deadline to lift the debt ceiling, the Republican-controlled House of Representatives passed on a 269-161 vote the $2.1-trillion deficit-cutting plan hammered out over the weekend by congressional leaders with President Barack Obama.

The Democratic-controlled Senate was expected to approve the bill at noon (4pm GMT) on Tuesday. It would then go to the desk of Obama, who has said he is anxious to sign it into law.

House approval had been considered the biggest obstacle to a solution to the debt limit crisis and there was suspense right up until the end of the 15-minute vote, as many lawmakers waited until the final minutes to cast a “yea| or a “nay”.

While 174 Republicans voted for the measure, 66 opposed it, requiring Democratic support for it to pass. Democratic House members were evenly split — 95 for, 95 against — as many objected angrily to spending cuts without tax hikes.

House Speaker John Boehner, the top Republican in Congress, said the end result justified the often torturous months of negotiations. “The process works. It may not be pretty, but it works,” he said.

The Bill raises the borrowing limit into 2013, calls for spending cuts spread over 10 years and creates a congressional committee to recommend a deficit-reduction package by late November. It contains no immediate tax increases.

The passage signalled the end was in sight to a months-long acrimonious partisan battle that had deadlocked the political system of the United States, alarming its international allies and shaking financial markets. Feuding could flare again when the deal must be implemented.

There was additional drama when Representative Gabrielle Giffords, an Arizona Democrat badly injured in a January shooting, made a surprise appearance on the House floor to vote for the Bill, drawing applause. She blew kisses and waved.

Up to the last minute, financial markets worldwide had been rattled by uncertainty over whether the compromise plan could pass the House in the face of objections from conservative Tea Party Republicans and liberal Democrats.

Having a deal in place by Tuesday to raise the government’s $14.3-trillion borrowing limit removes the risk of Washington not being able to borrow money to pay all of its bills.

Concern now switched to whether the deal and the hard-fought compromises that forged it would be enough to keep influential credit ratings agencies from the unprecedented step of downgrading the top-notch US credit rating.

There was little immediate reaction in financial markets.

But earlier, the US dollar fell against the Swiss franc to a record low as investors flocked to assets considered safe, worried about a bleak outlook for the world economy and a possible cut to the United States’ triple-A credit rating.

Such a move could push up borrowing costs just as the US economy is still struggling to recover from recession.

Mohamed El-Erian, co-chief investment officer of Pimco, which runs the world’s largest bond fund, said attention would now focus on a possible US downgrade “and all the detrimental effects of weeks of political squabbles on household and corporate confidence, economic governance, growth, employment, inequality and America’s standing in the global economy”.

‘Do we have a deal?’
Details emerged of how haggling over the deal lasted into Sunday evening. Obama finally called Boehner at 12.15am GMT on Monday from the Oval Office, according to Democratic officials.

“Do we have a deal?” Obama asked. Senior White House staff in the room held their breath as the two talked but were hugely relieved a few moments later when they heard the president say, “Congratulations to you, too, John.”

Through Monday, Republican and Democratic leaders worked to convince their rank-and-file to back the agreement.

Obama and many lawmakers admitted the compromise deal was not perfect. But they stressed it was needed to avert a US default debacle.

“This has been a long and messy process and as with any compromise the outcome is far from satisfying,” Obama said in a video message issued by his 2012 re-election campaign. “But it has also launched an important debate about how we approach the big challenges we face.”

The political dysfunction in Washington has also dented America’s stature as the world’s capitalist superpower.

Russian Prime Minister Vladimir Putin, a frequent US critic, accused America of living beyond its means “like a parasite” on the global economy.

China’s main official newspaper said despite the 11th-hour deal, US debt woes still threatened the world economy. US sovereign debt problems “had merely been pushed off, and there is a tendency for them to grow,” the People’s Daily said.

Questions on defence cuts
It was hard to identify winners in the bitter fight that led up to the House vote on Monday.

Obama had to accept deeper spending cuts than he wanted and will have to defend them to his liberal base as he runs for re-election next year, but he could win points with moderates and independents he needs to win a second term.

Boehner got cuts he demanded without immediate tax increases, but had to fight some criticism of being inflexible and a captive of his party’s Tea Party wing.

Rejecting accusations they had held the country hostage over their demands for slashing spending, the Tea Party fiscal conservatives said the cuts did not go far enough.

The deal approved by the House calls for a 12-member special congressional committee to locate $1.5-trillion in budget savings by late November. It does not spell out where the spending cuts should be made and instead puts off decisions about which programs will bear the brunt in the future.

The likelihood that $850-billion in national security spending could be cut over the next decade drew criticism from some lawmakers and sent defence stocks lower.

Some members of the special committee will push for the first major tax code overhaul in 25 years, but wrangling over ending tax breaks could set up the next big battle in the charged political atmosphere in Washington.

Healthcare stocks, including United Health, were among the worst performers on Wall Street as investors feared the debt-ceiling deal could lead to cuts in Medicare and other federal health programmes, analysts said. – Reuters