Pledge to Kyoto the bottom line 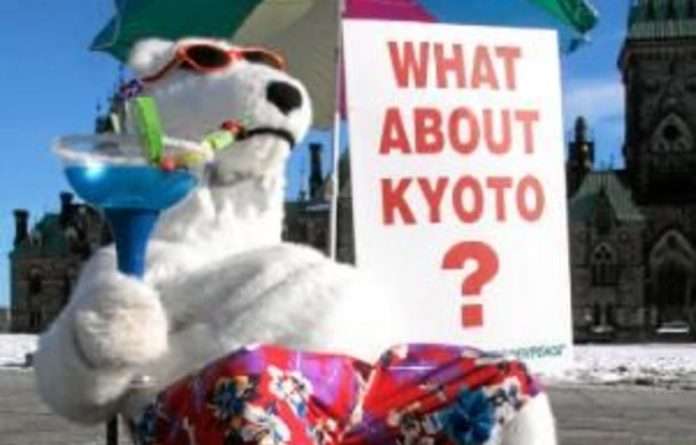 South Africa will fight to ensure that the Kyoto Protocol does not die at the United Nations’s big climate change conference, COP17, in Durban at the end of the year, Environment Minister Edna Molewa pledged this week.

Although Cabinet will approve South Africa’s official negotiating position only in October, Molewa and International Relations Minister Maite Nkoana-Mashabane gave the world a preview of government’s likely strategy stance at a media conference in Pretoria this week. They warned that South Africa was unlikely to budge on Kyoto.

The press conference was called after the Mail & Guardian reported last week rumoured tensions between the two ministers and their departments and concern that South Africa was falling behind in its preparations for the event, during which the world will again attempt to thrash out a new climate treaty.

Standing side by side, the ministers gave the assurance that plans were on track and there was ‘no turf battle”. Nkoana-Mashabane said South Africa vocabulary did not allow for the concept of ‘turf war”. ‘I’m the president [of COP17]. Everyone knows their role.”

She said the government knew that expectations were high because of South Africa’s history as a reconciler of opposing positions.

‘We picked up on unease on the general state of readiness,” said Nkoana-Mashabane. ‘But you can tell the international community we are more than ready.”

Much is expected of South Africa as a host nation and the country’s negotiating position will play a large part in brokering a climate treaty.

In addition to a ‘determination on the second commitment period of the Kyoto Protocol”, a further South African priority was to remain in step with Africa while balancing its membership of the Basic Group, which incorporates Brazil, India and China. They are seen to include the developing world’s major polluters.

‘In view of the fact that Africa is the continent most affected by climate change it is important that it continues to speak with one voice,” Molewa said.

However, it is becoming clear that South Africa does not visualise a legally binding agreement coming out of Durban.

Molewa said the conference would ‘be a step towards a fair global regime on climate rather than concluding a comprehensive agreement”.

Unresolved issues from the 2007 Bali conference would have to be put on the agenda in Durban, while the Cancún agreement needed to be built in, she said.

South Africa would push hard to ensure that adaptation to climate change was at the centre of any deal. The negotiations should also focus on finance particularly the design of the Green Climate Fund.

Molewa said the government was holding to its target of a 34% reduction in emissions relative to the country’s ‘business as usual” trajectory by 2020 and 42% by 2025.

But this would be put on the table only if developed nations such as the United States and Japan committed to the provision of finance, technology and capacity building.

While Molewa would lead the presentation of South Africa’s case in Durban, Nkoana-Mashabane, as COP17 president, would play a bridge-building role, trying to persuade obstinate parties such as China and the US to begin talking again.

Nkoana-Mashabane said to get talks going South Africa and outgoing host Mexico would arrange a ‘leaders’ dialogue” on climate change in New York in September, bringing together presidents of nations critical to any agreement. President Jacob Zuma and his Mexican counterpart, President Felipe Calderón, have invited about 20 heads of state to participate.

‘We are managing expectations,” said Clayson Monyela, international relations department spokesperson ‘We don’t want to hype it up. We all know what happened in Copenhagen.”

Two years ago host nation Denmark created intense political pressure and expectations regarding the signing of a climate treaty in Copenhagen. The conference failed and Mexico had to deal with the fallout.

In spite of organising a host of meetings behind the scenes, Mexico played down expectations of an outcome. Although no ground-breaking treaties were signed, the Cancún agreements put the climate change negotiations back on track. Monyela said it would be disastrous if South Africa became the graveyard of Kyoto.

Greenpeace ups the pressure
Greenpeace has fired the first salvo at the South African government over its nuclear power plans, indicating that civil society organisations will not give the country an easy ride at COP17.

In a report released this week, titled ‘The True Cost of Nuclear Power in South Africa”, the environmental pressure group criticises the energy path South Africa has adopted, which includes coal and nuclear energy rather than renewables.

South Africa’s energy policies will come under intense scrutiny as it plays host to the big United Nations climate change conference. At previous conferences, civil society organisations have used stunts such as scaling power stations or hijacking a coal freighter to highlight the policy inadequacies of the host nation. In addition, a host of critical reports usually appears just before a conference, designed to pressure the host.

Greenpeace’s latest 36-page report provides an overview of South Africa’s nuclear industry, including its history. It criticises government for not investing in renewable energy and for continuing on the apartheid government’s nuclear path.

The report highlights the problem of getting rid of nuclear waste. Drawing from eyewitness accounts, it underlines the health impact and the denial of justice to workers and communities living in the shadow of nuclear waste.

It ends with clear recommendations on how South Africa can move towards a cleaner and more sustainable energy future, principally involving a decisive shift towards solar and wind power.

The real test will come next year in Glasgow, when countries have to make concrete commitments to reducing emissions
Read more
National

President Cyril Ramaphosa’s move to appoint a Cabinet that is gender equitable is commendable, but more needs to be done in the corridors of power
Read more
National

In March, her department missed a deadline to deliver a plan of action on the cost, scale, and modality of a District Six restitution programme
Read more
Business