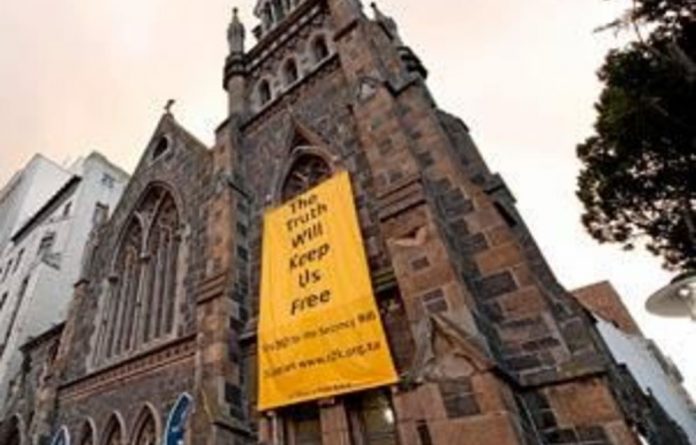 The fight between civil society and the ANC over the Protection of Information Bill ("the Secrecy Bill") is going to escalate and not a moment too soon, given that the dance of one step forward, two steps back has been going on for nearly three years.

The ANC's comical backtracking more than justifies the new wave of protests against the Bill being planned by civil society. At the end of June, there was celebration, albeit muted, over the concessions made. But by the end of last week, after a marathon session of the ad-hoc committee, some of the draconian secrecy measures that signal a gloomy moment for democracy were slipped back into the new draft of the Bill.

But instead of the ANC being upfront and saying it wants to protect itself from public scrutiny, it now avers that it wishes to protect South Africans from secrets. This is twisted logic.

The expanded definition of "national security" inexplicably proposes that South Africans be protected from "information peddling", from "exposure of a state security matter" and from "exposure of economic, scientific and technological secrets vital to the republic's stability, security, integrity and development".

State-security matters are defined as "any matter that is dealt with by the agency or that relates to the functions of the agency or to the relationship existing between any person and the agency".

In a nutshell, this draws a veil over all activities and operations within the state security apparatus, going way beyond any acceptable democratic boundary of safety and security for South Africans, as well as being unconstitutional. In addition, there is backtracking on commercial information. Civil society thought it had agreement that commercial information would not be protected from public scrutiny, but in the latest draft it can be classified.

The next "final" deadline for the Bill is September 23 and, in a way, the protagonists and antagonists are as far apart from each other as they were years ago. The bottom line is that there is no public-interest defence — the ANC is ostensibly protecting the public from "information peddlers" while keeping its own secrets.

How are we to understand the one-step-forward, two-steps-back dance of the Secrecy Bill? The most obvious point is that the ANC is not a monolithic body with one ideological strand. It is a diverse organisation with many disparate players fighting for hegemony — democratic centrists, hardcore Stalinists, socialists and liberals. Sometimes the democratic tentacle, as seen in the Constitution, reaches out.

Then we get "concessions", such as those that appeared at the end of June. And then, as happened last week, it looks as if the securocrats are beginning to reassert their stranglehold.

Democrats now ask whether the backtracking is bad faith or the result of paranoia and confusion. Maybe it's the result of inappropriate advice from weak state law advisers, or perhaps it's an attempt by the securocrats within the state security apparatus to bolster their own power?

There is one optimistic aspect for democracy in this whole sorry saga: civil society is energised for action.

Battlelines are being drawn

Citizens want openness and transparency, as is made evident by the more than 20 000 who signed the Right2Know (R2K) petition and the more than 400 nongovernmental organisations that have endorsed the campaign.

Last week, faith leaders held a meeting in Gugulethu condemning the Bill and the Unemployed Peoples' Movement has begun to mobilise against it in the Eastern Cape.

The Freedom of Expression Network is planning protests in all provinces. In Cape Town, Parliament will be picketed until the September deadline.

On August 13, there will be a mass rally in Johannesburg, organised by R2K, which will culminate in a march to the Constitutional Court.

If these protests do not push the ANC to retreat from its attack on freedom of information, there will be a battle in the Constitutional Court.

Glenda Daniels is advocacy co-ordinator at the M&G Centre for Investigative Journalism (amaBhungane) and serves on the national working group of Right2Know.

Will the new media code rein in haters?

For the first time, online and social media texts are being regulated alongside printed material
Read more
Analysis

Glenda Daniels asks if it is the adoption of English that gives us the "grammar" of colonialism.
Read more
Analysis

A wonderful opportunity in the form of a spanking new press code has presented itself to the media.
Read more
Opinion

The media and the ANC’s paranoid gaze

In her book Fight for Democracy: The ANC and the Media in South Africa, Glenda Daniels explores the ruling party's relationship with the media.
Read more
National

The Press Freedom Commission has called for more public participation and a hierarchy of penalties, but rejected the idea of a media tribunal.
Read more
National

Fines on the cards for errant newspapers

A new regulatory regime is imminent for SA's newspaper industry wherein an independent regulator will have the power to impose fines on newspapers.
Read more
Advertising
Continue to the category
Politics