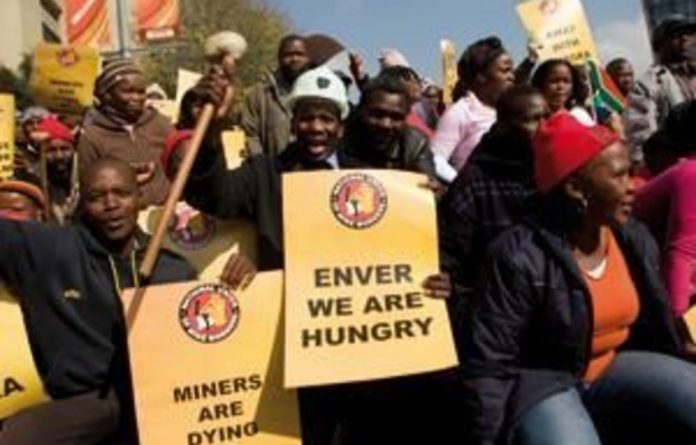 A close confidante of President Jacob Zuma will benefit from a Chinese company’s purchase of the beleaguered Orkney gold mine, which was run into the ground by Aurora Empowerment Systems, the politically-connected mining company headed by former president Nelson Mandela’s grandson Zondwa, and Zuma’s nephew Khulubuse.

China Africa Precious Metals (CAPM) has agreed to buy the Pamodzi Orkney gold mine for R150-million subject to conditions, the mine’s provisional liquidators and the company said on Friday in a joint statement.

“CAPM is 74% owned by Superb Gold Ltd, an affiliate of the SSC Mandarin Group, with 26% owned by a broad-based black economic empowerment consortium led by Mr Elias Khumalo.”

The Mail & Guardian reported in 2006 that Khumalo, a former trade unionist, was part of President Jacob Zuma’s inner circle.

He first made contact with Zuma in 1993 as a member of a “concerned Zulu” group seeking help in negotiating an end to KwaZulu-Natal’s political violence. He later co-founded information technology company Multi-consult. Zuma spoke at the company’s launch at a Durban hotel in the late 1990s.

No wages
Aurora had been managing the liquidated Pamodzi Gold mines in Orkney and Grootvlei on the East Rand since October 2009.

But the purchase agreement, which had been approved by the major secured creditor, the Industrial Development Corporation, received the backing of the unions affected, the National Union of Mineworkers and Solidarity.

“This agreement is subject to the fulfilment of a number of suspensive conditions, including that all necessary regulatory and court approvals be obtained by certain specified dates,” the liquidators said.

CAPM intended spending over R525-million on developing and erecting a new gold plant at the mine. It wanted to restore operations and prepare the mine to resume full production within 12 months from the agreement’s completion date.

“Our investment represents confidence in the government’s leadership and their macro-economic policy,” he said.

Solidarity deputy general secretary Gideon du Plessis said the union welcomed the agreement, but had conditions of its own.

The union wanted the re-appointment of its members who were sufficiently qualified to work at the Orkney mine and a collective agreement with all trade unions.

All employees’ conditions of service had to be in writing. Dispute procedures and legal steps to be taken had to be set down in case of non-payment of employees’ wages.

Pamodzi went into liquidation in 2009, after which the liquidators accepted Aurora’s R600-million bid for the Orkney mine in the North West and the Grootvlei mine in Springs, Gauteng.

The company failed to raise the capital to follow through on the sale, and in June the liquidators ordered it to leave the mines. It operated the mines in the meantime, but failed to pay miners and allegedly stripped the mines’ assets.

In court
In May, Solidarity served a liquidation application on Aurora Empowerment Systems to force the miner to pay more than R3-million in outstanding wages to workers.

The company was before the Master of the High Court this week behind closed doors but the M&G understands Aurora came under intense pressure, especially over allegations that it had asset-stripped the mines. “The rule of law has now been tested to see if there is any concrete evidence for the National Prosecuting Authority and Asset Forfeiture Unit to act against the directors of Aurora,” said du Plessis.

President Jacob Zuma’s former lawyer, Michael Hulley, testified, knowing he could be disbarred if proven guilty of any wrongdoing. Another director, Zondwa Mandela, the grandson of Nelson Mandela, apparently said he knew little about the operations of the mine.

Khulubuse Zuma, the nephew of President Jacob Zuma, did not testify this week because he was reportedly in Senegal, but the master could rule that he must testify in front of a magistrate.

This week’s testimony will help liquidators decide whether there are grounds for prosecuting Aurora and whether any damages can be claimed from the embattled company.

Some other liquidation hearings have been open to the public but the M&G understands the liquidators wanted to keep the sensitive Aurora case closed, to encourage full co-operation from Aurora’s directors.

Du Plessis said his union was worried about what was left of the mines.

Water pumps had also been sold off but, at the time, head liquidator Enver Motala said that was not a problem because “Aurora somehow needs to fund their care and maintenance”. Last year a senior source at the Orkney mine told the M&G Aurora wanted to sell off equipment to service its debts.

When the M&G visited Grootvlei in May the hostels were occupied by Mozambican immigrants, many of whom were surviving by selling scrap metal from the mines.

In June, the joint liquidators stripped the company of its control of the mines, a move unions believe came too late to save Grootvlei. — Sapa and M&G