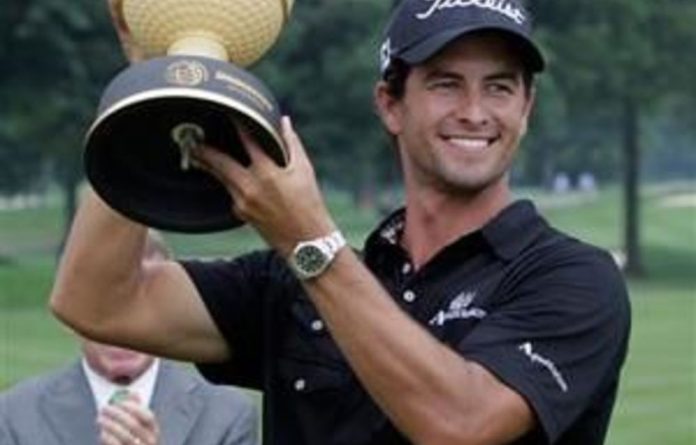 Australia’s Adam Scott won the Bridgestone Invitational on Sunday, posting a final-round 65 to notch a four-stroke victory over Luke Donald and Rickie Fowler.

Scott, with Tiger Woods’ former caddie Steve Williams on his bag, finished with a four-round total of 17-under 263.

“I felt good today,” said Scott, who finished with a flourish with a birdie at the 72nd hole. “I stayed so patient. I picked my moments.”

World number one Donald and Fowler both shot 66 for 267 while Japanese teen phenomenon Ryo Ishikawa carded a 69 to finish with a share of fourth alongside Australian Jason Day (69) on 268.

Ishikawa, playing in the last group, challenged for the lead but Scott pulled away with birdies at 12 and 14 as the 19-year-old Japanese star three-putted 15 to fall back.

On top in the first half
“I was able to play well to be at least on top for a moment in the first half of the game today,” Ishikawa said. “I think the 14th and 15th hole separated everything.”

He played the last 26 holes without a bogey and his winning total was the lowest at Firestone since Woods’ 259 in 2000.

Ishikawa’s bogey from the trees at the final hole cost him a share of second place.

Scott said it was a bonus having a caddie of Williams’ experience. Williams caddied for Woods in seven victories at the Firestone course.

Woods sacked Williams this summer and the New Zealander, who had caddied for Scott during Woods’ recent injury layoff, made his relationship with the Australian permanent.

Great knowledge
“Obviously he has such a great knowledge of this golf course and the greens,” Scott said. “He’s seen a guy play incredible golf, the best golf anyone has ever played around here, so many times.

“He really guided me around the course nicely — when he needed to step in and just make a point of where we need to be, he did, and had some great little notes in his book about putts on greens.”

Williams, who carried Woods’ clubs for 13 of the American’s 14 major titles, told a television interviewer it was “the best win of my life”.

He thanked family and fans for their support in remarks that were promptly interpreted as a dig at his former boss.

The split between Woods and Williams, friends as well as long-time professional partners, caused plenty of buzz in the golf world and Williams admitted to nerves in his first outing as Scott’s full-time caddie.

“There were a lot of expectations today,” he said. “I was nervous … it’s an incredible feeling to back it up.”

No comment
While Scott was happy to discuss what Williams could contribute, he refused to be drawn into any possible feud between Williams and Woods.

“I’m not involved in it at all, and they know that,” Scott said. “I’m just out here to do my job. They’ll figure that out themselves. They’re both men.”

Woods, who suffered left knee and Achilles tendon injuries at the Masters and aggravated them in May at the Players Championship, hadn’t played a complete round since Augusta in April until Thursday.

Woods started strong with two birdies in his first five holes but then dropped five shots as he failed to find a fairway off seven consecutive tees.

Three late birdies gave him an even-par round.

“I had it in spurts this week,” Woods said. “Today was a good example of that. I hit it well starting out, then completely lost it there, and tried to piece it back together at the end.” — AFP