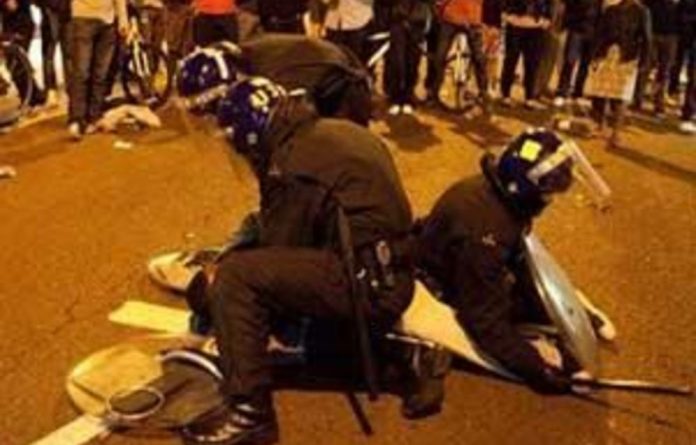 Riots flared in English cities and towns on Tuesday night as London waited anxiously to see if thousands of police deployed on its streets could head off the youths who had rampaged across the capital virtually unchecked for three nights.

The rioting erupted in London on Saturday but has also spread to other parts of the country.

There were isolated incidents of “disorder” in the city of Wolverhampton and town of West Bromwich, both near Birmingham, England’s second biggest city, police said.

“In Wolverhampton, some stores have been broken into. In West Bromwich, there is currently some disorder and two cars have been set on fire,” said a statement from West Midlands Police.

“Police officers are at both scenes dealing with the incidents.”

A police spokesperson refused to say how many people were involved in the disturbances.

West Midlands Police have already arrested more than 130 people after rioting late on Monday in Birmingham, which saw shops smashed up and looted in the city centre and a police station set on fire.

In Salford, part of greater Manchester in northwest England, rioters threw bricks at police and set fire to buildings. A BBC cameraman was assaulted.

Television pictures showed flames leaping from shops and cars in Salford and Manchester, and plumes of thick black smoke billowing across roads.

In central Manchester, police said a clothes shop was set alight. “I can confirm a shop is on fire and 200 youths that gathered in the city centre have been chased by riot police and dispersed. Seven arrests have been made so far,” a spokesperson for Greater Manchester Police said.

Further south in West Bromwich and Wolverhampton, cars were burned and stores raided.

In London, commuters hurried home early, shops shut and many shopkeepers boarded their windows as the city prepared nervously for more of the violence that had erupted in neighbourhoods across London and spread to other cities. Police promised to nearly triple their deployment on the streets.

Community leaders said the violence in London, the worst for decades in the huge, multi-ethnic capital, was rooted in growing disparities in wealth and opportunity.

Gangs have ransacked stores, carting off clothes, shoes and electronic goods, torched cars, shops and homes — causing tens of millions of pounds of damage — and taunted the police.

Prime Minister David Cameron, who cut short a family holiday in Tuscany to deal with the crisis, told reporters: “This is criminality pure and simple and it has to be confronted and defeated.”

“People should be in no doubt that we will do everything necessary to restore order to Britain’s streets,” he said after a meeting of the government’s crisis committee, Cobra.

Another such meeting was set for Wednesday. Cameron also recalled Parliament from its summer recess, a rare move.

Cameron said 16 000 police officers would be on the streets on Tuesday night, compared to the 6 000 out on Monday night. London has a population of 7.8-million.

Struggling economy
The unrest poses a new challenge to Cameron as Britain’s economy struggles to grow while his government slashes public spending and raises taxes to cut a yawning budget deficit — moves that some commentators say have aggravated the plight of young people in inner cities.

It also shows the world an ugly side of London less than a year before it hosts the 2012 Olympic Games, an event that officials hope will serve as a showcase for the city in the way that April’s royal wedding did.

“This morning was a dark morning to wake to in London. No one should wake in this wonderful city of ours to see such scenes of devastation and violence,” said Metropolitan Police’s deputy assistant commissioner, Steve Kavanagh.

Police arrested more than 200 people overnight and a total of 450 over the three nights, filling the city’s cells to capacity. More than 100 police officers were injured.

A 26-year-old man died after being shot in Croydon, south of London, the first fatality of the riots.

Many Londoners feared another night of trouble. Sales of baseball bats and police batons shot up more than 5 000 percent in the last 24 hours on Amazon’s British website.

In Hackney, scene of some of the worst rioting on Monday, groups of yellow-vested police were visible everywhere.

Youth gangs were reported to be coordinating their movements though social networks — particularly secure-access Blackberry Messenger groups — and targeting shops.

Local member of parliament David Lammy said he was asking Blackberry to suspend its messaging service.

The police have been accused of failing to bring the situation under control by going in softly to spare local sensibilities. On Tuesday, London’s police said they would consider using rubber or plastic bullets.

The first riots broke out on Saturday in north London’s Tottenham district, when a peaceful protest over the police shooting of a suspect two days earlier led to violence.

Pressure on police
Police are likely to come under fresh pressure over that incident after a watchdog said on Tuesday there was no evidence that a handgun retrieved at the scene had been fired. Reports initially suggested Mark Duggan had shot at police.

Tottenham includes areas with the highest unemployment rates in London. It also has a history of racial tension with local young people, especially in black communities, resenting police behaviour.

“It’s us versus them, the police, the system,” said one youth at a grim housing estate in the London district of Hackney, the epicentre of Monday night’s rioting.

“They call it looting and criminality. It’s not that. There’s a real hatred against the system.” His friends, some covering their faces with hoods, nodded in agreement.

Other Londoners tried to clear up the mess.

Hundreds of volunteers carrying brooms, dustpans, rubber gloves and black bags gathered on Tuesday morning in Clapham, south of the River Thames, to help clean up.

Hackney’s Mare Street, scene of serious disorder on Monday night, was largely back to normal by morning, with traffic flowing and the streets swept clean. A few shops had smashed windows boarded up, including a betting shop and a cafe.

The London 2012 Organising Committee hosted an International Olympic Committee visit “as planned” on Tuesday and said the violence would not hurt preparations for the Olympics.

However, other sporting events suffered. England cancelled Wednesday’s international soccer friendly with the Netherlands and three club games were also called off.

The ramifications also extended into international finance at a time when world markets are in turmoil.

“Just a few days ago we were talking about sterling as a new safe haven but these riots taking place are another blemish that must have soured anyone’s taste for the currency,” said Neil Mellor, currency strategist at Bank of New York Mellon. — Reuters, AFP

Smacking will never be right

The Juju rioters — bored with no hope for the future?