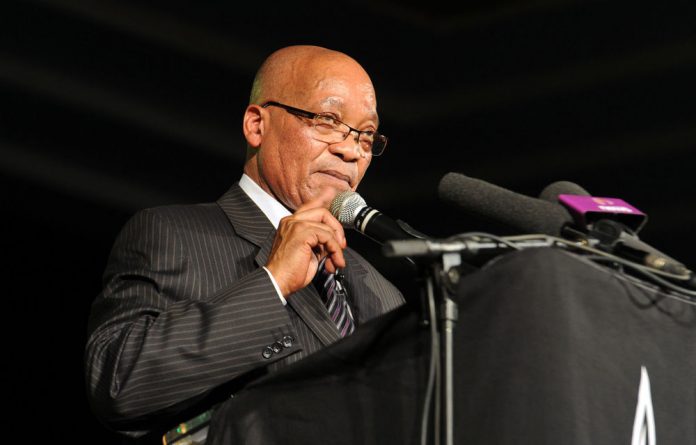 President Jacob Zuma has still said nothing about the scandal surrounding leases for police headquarters that were given to his on-again, off-again friend Roux Shabangu, except to dismiss as "urban legend" talk that he fired Geoff Doidge as public works minister to help get the dodgy deals done.

And he has kicked into parliamentary touch the report of Public Protector Thuli Madonsela on the leases, which cast a deep pall over both Doidge's replacement, Gwen Mahlangu-Nkabinde, and national police commissioner Bheki Cele.

This week we report on another attempt to stitch up a tender for government property, and this time the proximity of those involved to the president cannot so easily be denied.

Lonwabo Sambudla married Zuma's daughter Duduzile in April. Mingling with the political celebrities and zillionaires at that event were bureaucrats from the department of public service administration.

And since the department decided it needed R1-billion worth of new headquarters, despite an apparent lack of budget, it has been straining every sinew to ensure that the project goes to the aptly named Billion Group, a property company that Sambudla acts as a broker for, earning commission on the deals he brings in.

He has been involved personally in lobbying for the public service administration tender and helping to ensure that departmental decision-makers hear Billion's case — outside of the formal bidding process.

The tender may not have been consummated yet but it seems clear that the minister of public service administration, Richard Baloyi, has been personally involved in pushing for it, in spite of the protests of some of his staff.

It is clear too that the level of contact between Billion and the department goes far beyond what would ordinarily be permitted during the evaluation of a tender. When the Mail & Guardian last week sent questions about the process to the departments of public service administration and public works, we expected bluster and denials, but what happened instead was stranger. We learnt that Eugene Mutati, an adviser to Mahlangu-Nkabinde, had been suspended quietly over his role in pushing for the deal.

More surprising still, instead of getting answers from the government, we were contacted by public relations advisers to the Billion Group. We had not yet contacted the company but they had been given our questions by the department.

It is not very hard to see what is going on here. As Sambudla himself put it, people in the property industry advised him to continue working as a broker "because I have connections". Indeed, the best connections of all.

The M&G has been reporting since early last year on the expansion of the Zuma family's business interests since the Polokwane elective conference of the ANC, largely in state-financed or highly regulated industries. The president has shrugged all off all suggestions of impropriety, even as concern within the governing alliance grows.

A senior family member has now been implicated in an apparent attempt to profit from the most fashionable tender fiddle of the day — bent contracts for government offices.

If dad doesn't act, we will have no option but to conclude that he approves.

NHI no use without real reform
The grotesque inequality in access to healthcare and the quality of that care in South Africa is unacceptable. Universal access should be the goal and the carefully phased approach to reaching it suggested by the National Health Insurance (NHI) green paper, which was released yesterday, is welcome.

However, we live in a country with a notoriously bad public healthcare system, crippled by a lack of health professionals, badly managed hospitals, corruption and large numbers of nurses who are too often indifferent to the suffering of their patients — as detailed in this week's Human Rights Watch report on maternal health services in the Eastern Cape. Deep reform of the public health system, coupled with a recognition of the economic realities of our country, must be at the heart of any NHI proposal. An NHI will fail outright if the current state of public healthcare does not improve drastically.

Investing more money in the health system is by no means all that is required. More often than not, it is the management of the required resources that clinches the deal. If the additional funds for the NHI are siphoned off by corrupt and incompetent managers, health outcomes will deteriorate. It is imperative that strong mechanisms to prevent corruption are implemented and enforced.

Requiring an already overburdened middle class to contribute mandatory payroll taxes to a health system they are not prepared to use should also be considered carefully. Current private medical-insurance contributions range between 5.5% and 9% of employees' salaries. Doubling that and requiring individuals to pay both NHI and medical-aid contributions, while simultaneously doing away with private insurance tax subsidies, will impact heavily on the income levels of these crucial economic actors.

We need better healthcare for all, but we should be mindful of what can realistically be achieved in a country such as ours and what means are used to achieve this. If the NHI is a spur to real reform, we will welcome it, but public trust is battered and it will take more than policy papers to rebuild it.