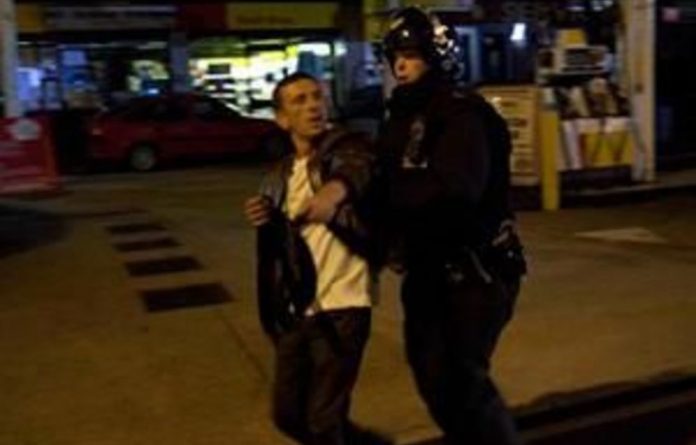 Some 200 students held a demonstration outside the British embassy in Tehran on Sunday to protest at what President Mahmoud Ahmadinejad called the “savage” police treatment of people involved in street unrest in London last week.

Watched by around 50 riot police, some students threw eggs towards the embassy compound and at the end of the protest they held up masks of Mark Duggan, the man whose shooting by police sparked the protests and riots in Britain.

Some protesters carried anti-British placards. One read: “London 2011, Tehran 1979, throw off your shah!” a reference to Iran’s 1979 Islamic Revolution which overthrew a Western-backed king.

For many years Iran has been on the receiving end of criticism from Western countries over its human rights record, especially the crushing of demonstrations after the re-election of President Mahmoud Ahmadinejad in June 2009.

Iranian politicians have called on the United Nations (UN) to condemn Britain. The leader of the Basij militia, which battled anti-Ahmadinejad protesters in 2009, offered to send his forces to London, Liverpool and Birmingham “to act as a peacekeeping force and a buffer between repressive forces of the royal regime and the British people”.

Calls for restraint
Hojat Alamdari, a 26-year-old engineering student at the protest, told Reuters TV, “People around the world don’t link the issues of Great Britain to looting by rioters. The problem is that the people of that country have demands and certain rights, and are calling on their government to rectify their political and economic issues.”

Britain’s top diplomat in Tehran has told the government she would be happy to discuss events in Britain and encouraged Iran to allow a UN human rights rapporteur for Iran to be allowed into the country to look into its crackdown on the opposition and frequent use of the death penalty.

Other countries long used to Western criticism of their human rights records are relishing Britain’s embarrassment over the unrest on its streets.

But the government’s insistence that it will stick to its stringent plans to cut public spending will limit his room for manoeuvre.

Cameron’s Conservative Party, traditionally seen as the toughest mainstream party on questions of law and order, faces pressure to scrap plans to cut spending on the police, as well as calls for more funding in Britain’s deprived inner cities.

In the short term, Cameron and his 15-month-old coalition government look to have been damaged by the riots that swept like wildfire through London, Birmingham, Manchester, Liverpool and other English cities last week. But an election does not have to be called until 2015, giving him breathing space and time for a nuanced response.

Mayhem
Rioters bombarded police with missiles, set fire to cars and buildings and looted dozens of shops in the worst outbreak of violence in English cities for decades. The mayhem, in which five people were killed, badly damaged Britain’s reputation for stability less than a year before London hosts the Olympics.

Cameron, interior minister Theresa May, finance minister George Osborne and London Mayor Boris Johnson were all holidaying abroad when the riots began in the poor area of Tottenham, north London, on August 6.

A ComRes poll for the Independent on Sunday and Sunday Mirror newspapers found only 29% of voters thought Cameron and his government had handled the riots well. Sixty-one percent believed ministers had failed to return quickly enough.

Tough on crime
Polls have also found that most Britons, revolted by the anarchy, want tough action, with 65% in the ComRes poll saying Cameron should bring in the army — which, like the police, faces cuts — to support police. Some 73% said the government should impose curfews in riot-affected areas.

Another poll at the height of the riots found that one third of voters backed the use of live ammunition against rioters.

“They [voters] are concerned, first of all, that the people who have committed crimes are caught and punished properly, and secondly that the police are equipped and fired up to stop this happening again,” said Andrew Hawkins, chairperson of ComRes.

“Whether the government benefits politically from all of this is down to their success in achieving those things”.

Lessons from history
However, further outbreaks of rioting could be fatal to Cameron’s chances of retaining power in an election due by 2015.

Thatcher faced inner city riots in 1981 and 1985 but was rewarded at the polls for being tough on law and order.

Cameron could also look across the Channel to France where former Interior Minister Nicolas Sarkozy won the 2007 presidential election after making his name as a law and order hardliner in the riots that hit the poor suburbs around Paris and other French cities two years earlier.

Cameron personally led the response to the crisis when he returned to his desk on Tuesday, chairing meetings of a government crisis committee and saying there were pockets of British society that were “not just broken, but frankly sick.”

He took a firm law and order line, condemning the looting and violence as “criminality pure and simple” and refusing to see it as a reaction to poverty and lack of opportunity or to the deep public spending cuts imposed by his government.

Such a tough response will please right-wingers in Cameron’s Conservatives, who feel he betrayed party principles in forging a coalition with the left-leaning Liberal Democrats after last year’s general election produced an indecisive result.

Pleasing the police
The riots cap a turbulent summer for Cameron, buffeted by a phone-hacking scandal that shook Rupert Murdoch’s media empire.

Cameron has repeatedly been forced to defend the appointment of Andy Coulson as his spokesman, months after Coulson resigned as editor of the News of the World, one of Murdoch’s newspapers, following the jailing in 2007 of one of its reporters for hacking the phones of aides to Britain’s Prince William.

London police chief Paul Stephenson and another police commander resigned last month over the scandal, leaving the police rudderless when the riots hit.

Some commentators say the hacking scandal, which exposed cosy relations among press, politicians and police, as well as a 2009 scandal over the expense abuses by members of parliament has fed popular cynicism about the country’s authorities.

Cuts
But Cameron’s greatest challenge will likely come over planned cuts aimed at slashing the government’s debts — and its treatment of the police.

The government opened a rift with police by criticising its initial response to the riots and then claiming credit for quelling the violence — a suggestion rejected by police.

Alienating the police would be a miscalculation as Cameron needs to count on their support in the years ahead when spending cuts and a public sector pay squeeze are likely to lead to more strikes, demonstrations and trouble on the streets.

Cameron will face pressure from right-wingers in his own party as well as from the opposition Labour Party to reverse a planned 20% real-terms cut in the police budget over the next four years.

He has so far resisted reversing those cuts, but Patrick Dunleavy, professor of political science at the London School of Economics, believes he will eventually be forced to give way and that he may also have to ease the broader crackdown on spending.

“The first thing that will happen is that the police cuts will be frozen or paused and then gradually they will be deleted from the cuts programme,” he said.

“I think probably the government is going to have to relax quite a lot of its fiscal restrictiveness on public spending quite soon,” he added.

London ‘most unequal city’
Dunleavy believes the government’s spending cuts played a role in the riots, particularly the decision to withdraw an allowance paid to 16-to 18-year-olds who stayed in full-time education, and cuts to youth facilities.

Added to that is a general squeeze on living standards, with many workers receiving stagnant or falling wages while inflation is high, he said.

Alex Callinicos, professor of European studies at King’s College, London, says a key factor in the riots is that London is “the most unequal city in the developed world.”

“If you want the underlying cause of the riots, it is these inequalities and the acute and cumulative deprivation that young people in poor neighbourhoods experience.

“I think the cuts have made things worse because it has led to lots of youth centres … being closed down so you have got more bored youngsters hanging around,” he said.

The government already faces criticism from the Labour Party, which is around seven points ahead of the Conservatives in the polls, that the austerity programme is stifling growth.

Cameron may run into conflict with his Lib Dem coalition partners if he responds to the riots only by cracking down on law and order while ignoring social problems that may lie behind the unrest. The Lib Dems favour more spending on educating disadvantaged children and champion civil liberties. — Reuters