Tarzan and Arab: The Gaza artists determined to make it against all odds 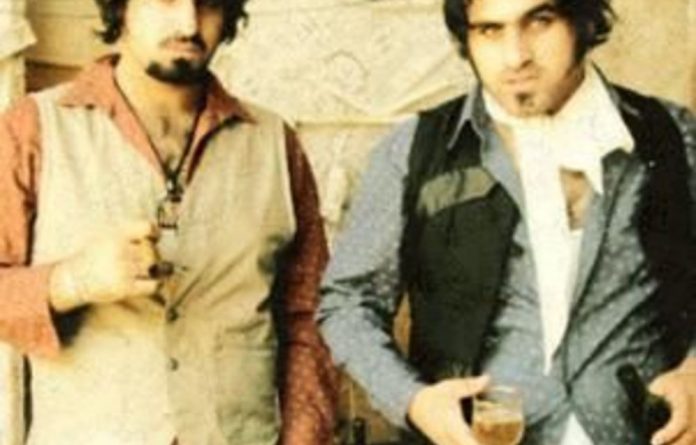 Tarzan and Arab, identical twin artists who have made an award-winning short movie and a remarkable set of cinema poster pastiches, are undeterred by the lack of training, equipment, funding, a place to show their work or a receptive audience.

“As artists we are restricted by living in a conservative and tough community,” says Arab.

“Let’s be realistic. Our life is under siege, under control. People don’t have time for art. They spend all their time looking for crumbs. They say, ‘What use is art? Art will not give you bread.’ “

The 23-year-old brothers are determined to build on their achievements and pursue their dream of studying at a film school abroad.

Tarzan and Arab — real names Ahmed and Mohamed Abu Nasser — cut unusual figures in Gaza. Their hair is long, they wear Converse All Stars smuggled from Egypt through the tunnels, and tangles of beads and chains hang around their necks.

Their father, a headteacher, used to paint in his free time and his interest in art influenced the twins. He bestowed nicknames on his sons which have stuck into adulthood, and now are their professional soubriquets.

Suffering and celluloid
Tarzan and Arab also paint and sketch, but since childhood they have been drawn towards cinematic art. “We used to pass the [old] cinema and see the scorched, peeling posters on the wall, and we were sad and wished we could go in,” says Tarzan.

Instead they decided to create their own posters, ones that would reflect “Gaza’s suffering, Gaza’s problems, the daily issues of the people,” says Arab.

The 20 or so striking images, in which the twins feature, bear the names of Israeli military operations — Summer Rain, Autumn Clouds, Defensive Shield, Cast Lead.

“For us the names were like war films. [We wanted] to make a cinema fantasy version of those operations.”

The twins also experimented with film. “In the beginning we had no idea about technique. But step by step we are getting there,” says Arab. Another Gazan artist working with film, Khalil Mozian, taught and encouraged them.

Their first film, Colourful Journey, is about factional infighting within Gaza and its political, social and personal cost. Tarzan and Arab depict a fratricidal war, their identical appearances reinforcing their message that Gazan brothers need to unite to face their common enemy.

The film won first prize at a competition in the West Bank city of Ramallah sponsored by the AM Qattan Foundation. It was also shown, with an exhibition of their posters, at the Mosaic Rooms in London in March. The twins were unable to attend either event. “Imagine your dream becomes a reality, and you are not in it,” says Arab.

Locked in
They talk of studying cinematic techniques at a European film school but acknowledge this dream is unlikely to become a reality. “Every artist wants to see the world,” says Arab. “Imagine, two people spend their entire lives in Gaza. They dream of travelling but it never comes true.”

Movement in and out of Gaza has been strictly controlled since Israel tightened its blockade four years ago, and though it has been eased consumer goods it remains extremely difficult for Gazans to leave the territory via the Israeli crossing point. In recent months, the Egyptian authorities have opened the border crossing at Rafah, at the southern end of Gaza, but there are still strict limits on who is allowed to leave. Men between 18 and 40 face the heaviest restrictions.

Tarzan and Arab’s tiny one-room rooftop studio and editing suite, which doubles as their sleeping quarters, is a work of art in itself. Graffiti covers the walls — “I wish I was your lover” reads one scrawl — the twins’ paintings are jumbled with sketches and a print of the Mona Lisa, strips of 35mm film hang from the ceiling, two upright pianos compete for floor space with their beds and computer equipment, and a single Converse All Star is nailed to the door. When the power fails, as it does frequently, they move their editing tools to a cafe.

They do not consider themselves political artists. “But as artists we examine our reality because the artist must talk about his own reality, not other realities. Our reality is full of politics,” says Tarzan.

But, adds Arab, “if you are smart you take the political reality [and] move it to your own place.”

Irritating the authorities
Their work has not had a warm response from Hamas. Arab was detained and accused of drinking alcohol after Hamas police found images on his laptop of a fictional bar scene for the poster Field of Dreams. They seized his hard drive containing all the twins’ work, and only returned it after four days after the intervention of mediators.

Hamas has banned two Khalil Mozian films, one because it included a shot of Palestinian child accepting a sweet from an Israeli soldier, the other for showing a woman with her hair uncovered.

“Filming and making movies is not the Hamas way,” says Tarzan. “Hamas has its mentality and perspectives. They want all art to be within their perspectives,” adds Arab.

It’s not surprising that Tarzan and Arab dream of leaving to study abroad. But if they did, would they ever return?

“Of course we’d come back. This is our land, we were born here, we have friends, family,” says Arab. “Every artist has to be connected and reflect their community and environment. We want to represent Gaza in our art.” — Guardian News and Media 2011