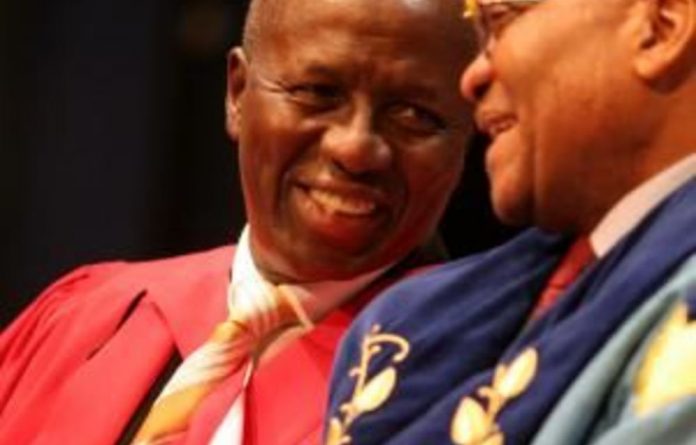 The Judicial Service Commission (JSC) will not call for further nominations for the position of chief justice other than President Jacob Zuma’s nomination, Judge Mogoeng Mogoeng.

There had been “lengthy deliberations” and a “secret ballot” and the majority of the commission had decided that they would not call for further nominations, JSC spokesperson CP Fourie said on Saturday.

“The JSC deliberated on whether it would call for further nominations other than that made by the president and resolved by a majority that it is neither permissible nor desirable to do so.

“The JSC will convene a meeting to which it will invite the nominee of the president to submit to an interview for the purpose of determining the suitability of that candidate to be appointed as chief justice,” he said.

“The proposed date for the public interview is Saturday September 3 in Cape Town.”

Fourie said Justice Minister Jeff Radebe was present at the commission. “[He] contributed in the debate.”

Fourie said the debate about nominations was conducted in a “professional like manner”.

The JSC would now send an invitation to Mogoeng for an interview.

Written submissions to be considered
Once the JSC’s invitation has been sent to Mogoeng, he must complete a prescribed questionnaire which will be submitted with his CV to the commission, Fourie said.

The JSC will also invite various law bodies to make written submissions on the Mogoeng’s suitability for the position of chief justice.

Fourie said the JSC would look at Mogoeng’s written responses, the responses he gives at the interview and submissions from the various law bodies.

The JSC would then advise Zuma, in writing, whether Mogoeng is a suitable person to be appointed to the position of chief justice.

No thanks
Deputy Chief Justice Dikgang Moseneke is not a nominee for the position of chief justice, he told the JSC.

“It is necessary that I banish the elephant in the room,” he said in his opening comments to the JSC.

“I am neither a hopeful, nor a nominee, nor a contender — present or future — for the position of chief justice,” he clarified.

A copy of his speech was handed to journalists on Saturday afternoon — five and a half hours after the sitting had started.

In terms of the Constitution, Zuma has to appoint the chief justice after consultation with the JSC and leaders of parties represented in the National Assembly.

The ANC and its allies, on the other hand, have thrown their weight firmly behind Zuma’s choice.

Business Dayreported this weekend’s meeting would be chaired by Moseneke — as set out in the JSC Act — and would also decide where and when the commission would interview Mogoeng.

The JSC would most likely have to discuss a letter from Paul Hoffman SC written to Zuma and on which the JSC was copied.

In the letter Hoffman said by “anointing” Mogoeng, the president had compromised the consultation process, it said.

Defending the choice
The debate on the country’s new chief justice must not impugn the dignity of the judiciary or demean the integrity of the nominee, the Presidency said on Wednesday.

“The facts regarding suitability and experience should not be disregarded in the debate,” said Zuma’s spokesperson, Mac Maharaj.

“The Presidency reiterates its respect and high regard for the judiciary and for the Constitutional Court as an arbiter in disputes in our country.”

Maharaj said Zuma welcomed the debate but there were “disappointing inaccuracies” and “distortions” in the response to Zuma’s nomination of Mogoeng as chief justice.

“These need to be addressed without delay to enable the debate to continue based on factual information.

“The debate must be balanced and be within the rules of common decency. It must not be designed to demean the person of, and question the integrity of the president’s nominee, Justice Mogoeng.”

Maharaj said that according to the Constitution, “any appropriately qualified woman or man who is a fit and proper person, and is a South African citizen, may be appointed as a judicial officer.

“The four must have been judges and not judges of the Constitutional Court, per se.

He said they could have been legal academics, advocates, attorneys or directors of non-governmental organisations.

“This has happened before, looking at the experience of the country’s post-apartheid chief justices, some of whom had no experience as judges, but who acquitted themselves in a distinguished manner.”

” … at the time of their appointment, both former Chief Justices Chaskalson and Langa were not judges.

“Former Chief Justice Sandile Ngcobo was first appointed as a judge in 1996. He served as Western Cape High Court Judge, Labour Appeal Court judge, Acting Judge President, and a judge of the Truth and Reconciliation Commission Amnesty Committee. He was later appointed to the Constitutional Court in 1999.”

He said Moseneke became a high court judge in November 2001 and was appointed to the Constitutional Court a year later.

Opposition parties appeared unhappy with Zuma’s nomination of Mogoeng as chief justice, but it received the ANC’s support.

The Congress of the People (Cope) on Wednesday said Mogoeng lacked the necessary experience.

Replying to Zuma’s letter to party leaders asking for comment on his choice, Cope leader Mosiuoa Lekota said Cope had carefully considered all the information available.

“We are of the opinion that, notwithstanding his academic qualifications, Mr Justice Mogoeng does not possess the requisite amount of experience on the bench.

“It is our humble submission that there are a number of highly capable legal minds with extensive experience on the current bench that deserve prior consideration,” he said.

“This will go a long way towards sustaining the distinguished standing our judicial bench enjoys at home, in the region, and beyond.

“Without any prejudice to Mr Justice Mogoeng, we humbly urge that you reconsider and take another look at all the members of the present bench,” Lekota said.

Christian Life Private School barred a pupil because he wore a bracelet with cultural significance, but the decision — even in the private sphere — is constitutionally wrong
Read more
Africa

The chief justice needs to publicly account for his comments, by either walking them back or explaining his change of heart on international law and its institutions
Read more
Advertising
Continue to the category
Education