Gaddafi goes to ground amid clashes in Tripoli 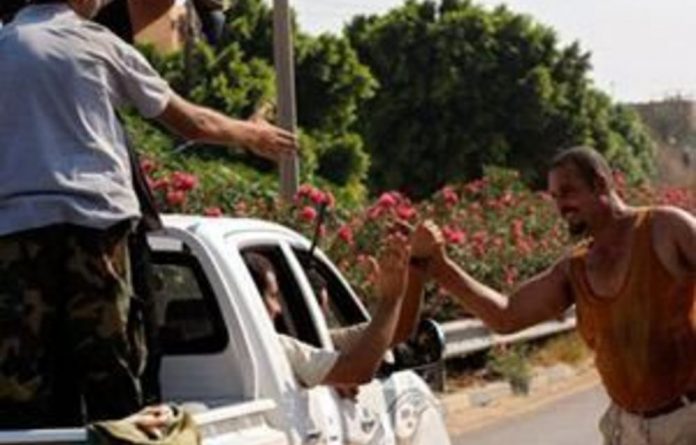 Tanks opened fire at rebels trying to storm Muammar Gaddafi’s main compound in Tripoli on Monday, although the whereabouts of the longtime Libyan leader remained unknown a day after a lightning advance by opposition fighters who poured into Tripoli capital with surprising ease.

The international community meanwhile called on Gaddafi to step down as euphoric residents celebrated in the Green Square, the symbolic heart of the regime.

Rebel spokesperson Mohammed Abdel-Rahman, who was in Tripoli, cautioned that pockets of resistance remained Gaddafi loyalists and that as long as Gaddafi remained on the run the “danger is still there”.

The clashes broke out at Gaddafi’s longtime command centre known as Bab al-Aziziya early on Monday when government tanks emerged from the complex and opened fire at rebels trying to get in, according to Abdel-Rahman and a neighbour. An Associated Press reporter at the nearby Rixos Hotel where foreign journalists stay could hear gunfire and loud explosions from the direction of the complex.

Tripoli resident Moammar al-Warfali, whose family home is next to the compound, said there appeared to be only a few tanks belonging to the remaining Gaddafi forces that have not fled or surrendered.

“When I climb the stairs and look at it from the roof, I see nothing at Bab al-Aziziya,” he said. “Nato has demolished it all and nothing remains.”

The Rixos also remained under the control of Gaddafi forces, with two trucks loaded with anti-aircraft machine guns and pro-regime fighters and snipers posted behind trees. Rebels and Tripoli residents set up checkpoints elsewhere in the city.

Italian Foreign Minister Franco Frattini said “no more than 10, 15% of the city is still in the hands of the regime”. He did not elaborate on how he came up with the figure.

State TV broadcast bitter audio pleas by Gaddafi for Libyans to defend his regime. Opposition fighters captured his son and one-time heir apparent, Seif al-Islam, who along with his father faces charges of crimes against humanity at the International Criminal Court in The Netherlands. Another son was under house arrest.

“It’s over, frizz-head,” chanted hundreds of jubilant men and women massed in Green Square late on Sunday, using a mocking nickname of the curly-haired Gaddafi. The revellers fired shots in the air, clapped and waved the rebels’ tricolour flag. Some set fire to the green flag of Gaddafi’s regime and shot holes in a poster with the leader’s image.

But Gaddafi’s defiance in a series of angry audio messages raised the possibility of a last-ditch fight over the capital, home to two million people. Gaddafi, who was not shown in the messages, called on his supporters to march in the streets of the capital and “purify it” of “the rats”.

Government spokesperson Moussa Ibrahim also claimed the regime has “thousands and thousands of fighters” and vowed: “We will fight. We have whole cities on our sides. They are coming en masse to protect Tripoli to join the fight.”

Nato officials promised warplanes from the alliance would continue to conduct regular patrols over Libya despite the latest rebel successes.

Jalloud, who was Gaddafi’s closest aide for decades before falling out with the leader in the 1990s, fled Tripoli on Friday, according to rebels.

The startling rebel breakthrough, after a long deadlock in Libya’s six-month-old civil war, was the culmination of a closely coordinated plan by rebels, Nato and anti-Gaddafii residents inside Tripoli, rebel leaders said. Rebel fighters from the west swept over 30km in a matter of hours on Sunday, taking town after town and overwhelming a major military base as residents poured out to cheer them. At the same time, Tripoli residents secretly armed by rebels rose up.

When rebels reached the gates of Tripoli, the special battalion entrusted by Gaddafi with guarding the capital promptly surrendered. The reason: its commander, whose brother had been executed by Gaddafi years ago, was secretly loyal to the rebellion, a senior rebel official, Fathi al-Baja, told the Associated Press.

President Barack Obama said Libya was “slipping from the grasp of a tyrant” and urged Gaddafi to relinquish power to prevent more bloodshed.

“The future of Libya is now in the hands of the Libyan people,” Obama said in a statement from Martha’s Vineyard, where he’s vacationing. He promised to work closely with rebels.

Unity government
South Africa, which led failed African Union efforts to mediate between the rebels and Gaddafi, refused to offer support to the rebels on Monday, saying it wants to see a unity government put in place as a transitional authority. But speaking to reporters, Foreign Minister Maite Nkoana-Mashabane said she did not envision a role for Gaddafi on such a transitional body, saying he had told AU mediators four months ago he was ready to give up leadership.

Nkoana-Mashabane also said repeatedly that South Africa has sent no planes to Libya to evacuate Gaddafi, has received no request from him for asylum and is involved in no efforts to extricate him.

Nkoana-Mashabane also said, “We don’t know his [Gaddafi’s] whereabouts. We assume he is still in Libya.”

The uprising against Gaddafi broke out in mid-February, inspired by successful revolts in Egypt and Tunisia. A brutal regime crackdown quickly transformed the protests into an armed rebellion. Rebels seized Libya’s east, setting up an internationally recognized transitional government there, and two pockets in the west, the port city of Misrata and the Nafusa mountain range.

Gaddafi clung to the remaining territory, and for months neither side had been able to break the other.

In early August, however, rebels launched an offensive from the Nafusa Mountains, then fought their way down to the Mediterranean coastal plain, backed by Nato airstrikes, and captured the strategic city of Zawiya.

The rebels’ leadership council, based in the eastern city of Benghazi, sent out SMSes to Tripoli residents, proclaiming, “Long live Free Libya” and urging them to protect public property. Internet service returned to the capital for the first time in six months.

Gaddafi is the Arab world’s longest-ruling, most erratic, most grimly fascinating leader — presiding over this North African desert nation with vast oil reserves and just six million people. For years, he was an international pariah blamed for the 1988 bombing of a Pan Am jumbo jet over Lockerbie, Scotland, that killed 270 people. After years of denial, Libya acknowledged responsibility, agreed to pay up to $10-million to relatives of each victim, and the Libyan rule declared he would dismantle his weapons of mass destruction program. That eased him back into the international community.