SA on Libya: We don’t want ‘state within a state’ 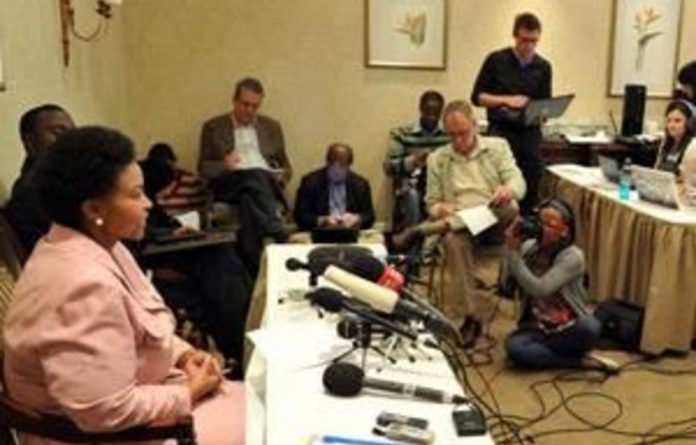 As rebels swept into Tripoli overnight, the SA government said on Monday it had not yet recognised Libya’s transitional national council.

South African Minister of International Relations and Cooperation Maite Nkoana-Mashabane told reporters in Johannesburg that the government did not want to create a “state within a state”, in Libya.

Nkoana-Mashabane said the Libyan interim authority had to start an “all inclusive dialogue aimed at building a truly representative and people centred” government.

“As Libya turns a new leaf in its history, the transitional government has the immediate responsibility of building national unity and reconciliation, restoring public order, reconstructing infrastructure and reviving the economy” she said.

Nkoana-Mashabane said the South African government has had no contact with Gaddafi in the last week.

“I am amazed at any insinuation of South Africa aiding anyone,” she said.

She said South Africa had not received a request for asylum from the Libyan leader and denied the government had sent an aircraft to evacuate his family.

Gaddafi won’t seek asylum
She said however that an aircraft had been sent to evacaute SA embassy staff in Tripoli, and other South Africans in the country.

Nkoana-Mashabane said she believed Gaddafi would not seek asylum in SA. Asked by reporters if the goverment would hand Gaddafi over to the International Criminal Court (ICC) — should he arrive in SA — all Nkoana-Mashabane would say was that the country was a signatory to ICC.

The ICC issued an arrest warrant for Gaddafi on June 27.

She said the South African government, “regretted any loss of life [in Libya] which could have been avoided”.

Nkoana-Mashabane said the SA government would work with the African Union to find an “inclusive [and] durable political solution in Libya”.

She said the “AU roadmap for peace”, which was drafted in April, had outlined an end to the conflict.

The roadmap envisaged dialogue among Libyans, which would help them plan an interim government and a draft constitution. She pledged South Africa’s support for the war-torn country.

The African Union is scheduled to hold a meeting on Libya on the August 26.